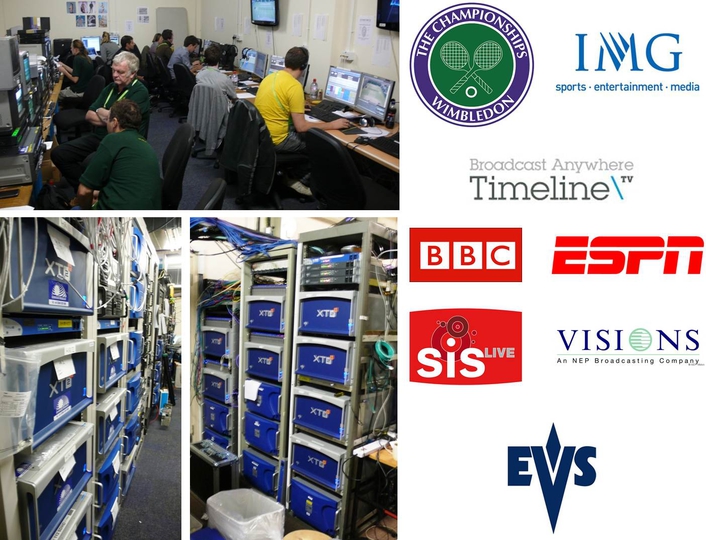 Timeline TV Logging Room and Server Rooms of Timeline TV and ESPN
At the All England Lawn Tennis Club’s (AELTC) 125th Wimbledon Championships EVS severs and IPDirectors were in operation at Timeline TV, ESPN, the HD OB trucks of SIS LIve, Mediatec and NEP Visions for the 2D and 3D production, providing the host broadcaster and all international broadcasters with replays of the matches and instant searchable access to archive footage.

Since 2007 Timeline TV, subcontracted by IMG Media, provides the host broadcast solution for the Wimbledon Championships. The system consists of 16 EVS XT servers and around 60 EVS IPDirector terminals to manage ingest control, content management, metadata management and on the fly editing. Each point played was logged in IPDirector combining live statistical information from the on-court scoring system (provided by the official Wimbledon technology sponsor IBM) with producer-entered classifications.

Shots got selected, in and outs got marked and together with all the metadata the HiRes clips were available to the rights holding broadcasters like the BBC to create their highlights editing. It also was used by Timeline TV itself to produce the worldfeed highlights which were shown by The Tennis Channel, Channel 7, NBC, Fox and others.

Only ESPN has brought its own system and crew of looggers to Wimbledon as they do for all the ATP tennis tournaments, however the EVS server and IPDirector system is of similar size as the host broadcasting system.

For the first time this year Timeline TV was offering its archive services, providing instant access to searchable archive footage from all televised matches of the 2007 to 2010 tournaments including the press conferences. The fully logged contend is stored on the EVS servers  at the Chiswick offices of IMG Media and was available online via the Timeline TV IPDirector terminals on location in Wimbledon. 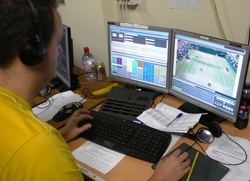 Key for relevant search results from the archive is intensive looging. In addition to the metadata delivered by the IBM system (e.g. speed of the ball, land of the serve, return of the serve, winning shot, etc.) Timeline TV has its own 15 loggers. Each looger looks at one court and has a grid of keywords to tag the action and log all the creative things that the computer and the radar can't see, which are basically the reactions of the athletes.

Over the two weeks of the turnament the system has recorded 24 HD signals all day long at 120Mbps onto the EVS XT2 online system. In parallel a 6Mbps version was recorded on the EVS XFile system making shure that every HiRes clip also has a LoRes version to give the users on the more than 50 browsing terminals instant access to all their search results bevore they decide which clip they like to have in HiRes on their Avid or FCP edit stations. 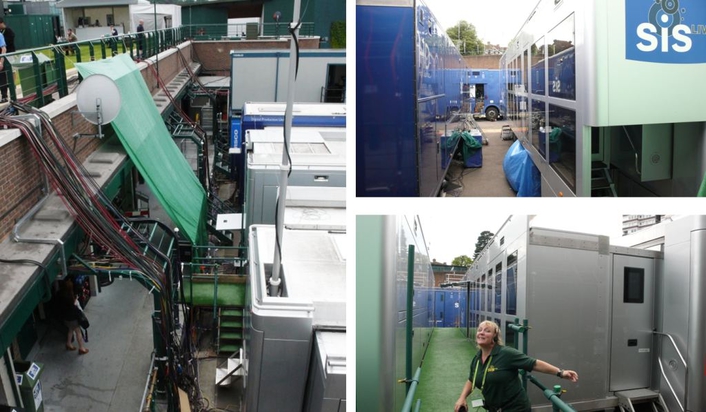