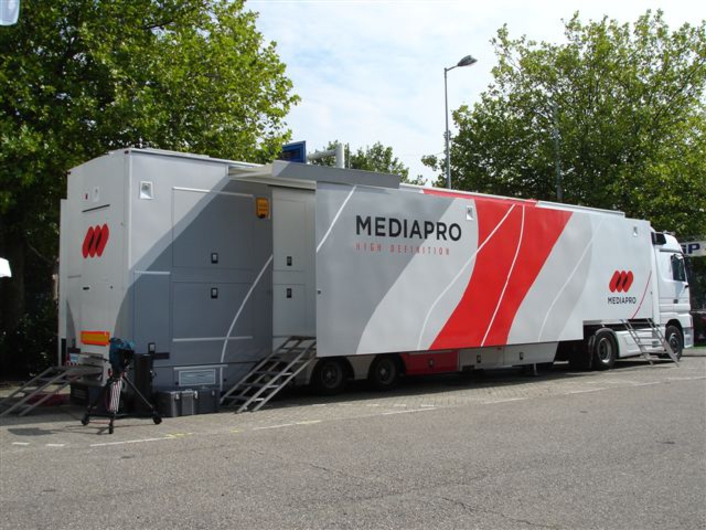 MediaPro HD OBVan
A team of more than 300 technical staff and 39 cameras in situ in the stadium, 16 of which providing images exclusively for laSexta, 3 for Al Jazeera and ESPN, in addition to 6 mobile units guaranteed the very best quality coverage of the title-decider clash between Real Madrid and FC Barcelona on Saturday.

The match was watched everywhere apart from India

GOL TELEVISIÓN had 2 cameras inside the Santiago Bernabéu to cover the pre-match build-up. The entire MEDIAPRO group provided services for the season’s most eagerly awaited matches. The international signal produced by MEDIAPRO was sent everywhere around the world apart from India and a host of networks from the 5 continents broadcasted the match live.

MEDIAPRO was in charge of distributing the signal both nationally and internationally as well as carrying out the production of the match under the supervision of Óscar Lago, one of the most experienced producers of sporting events and in charge of the upcoming Champions League Final in Madrid with 13 Barça Madrid matches under his belt with number 14 being his first in the Santiago Bernabéu. He also helped to produce the Final of the UEFA Cup in 1993 and the Final of the football in the Olympics in 1992. Daniel Lozano was in charge of the signal customisation for laSexta.

MEDIAPRO set up an operation which included 39 cameras inside the stadium, 14 pitch-side, with 2 Super Slow Motion and one Steadycam. Other cameras belonging to Telemadrid, TV3, BSKYB, ESPN and Al Jazeera were used for the customisation of the signal for those networks.

As a consequence of the agreements reached by MEDIAPRO with international networks around the world, the match signal was sent everywhere apart from India.

England, France, Italy, Germany, the countries in the Persian Gulf, the USA, South America, Mexico, Singapore, Hong Kong, China, Australia, Japan as well as most of North Africa and the West Coast countries watched the match live. More than 300 technicians provided services to cover one of the most eagerly awaited sporting events of recent times with more than 36 networks both national and international in attendance.