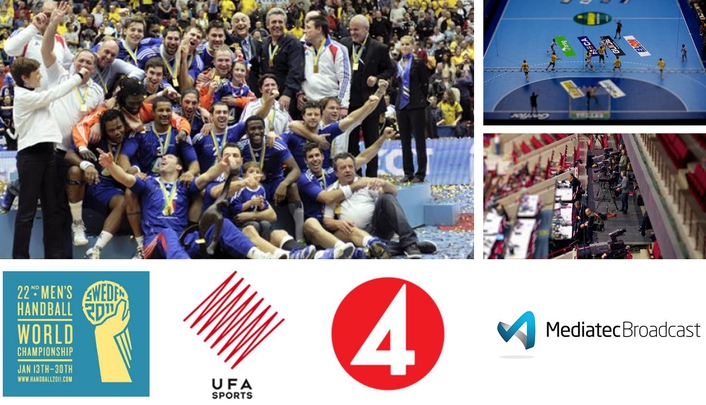 Mediatec Broadcast is proud to have been a part of the close cooperation between TV4 and UFA Sports
During 18 days in January the tournament was played at 8 locations in Sweden: Norrköping, Linköping, Jönköping, Göteborg, Malmö, Kristianstad, Lund and Skövde.

Swedish TV4, who was the host broadcaster of the World Championship, had appointed Mediatec Broadcast as their provider of technical facilities, project management and all crew needed for the productions. 98 matches were played, 94 of them were produced in HD.

Mediatec Broadcast also supplied equipment and technical personnel for the TV4 studio productions on site in Göteborg and Malmö. Mediatec was also responsible for all bookings of the unilateral and commentary services via the booking site hostbroadcaster.org on behalf of the rights holder UFA Sports.

Mediatec Broadcast, part of Mediatec Group, is one of Europe’s most experienced outside broadcast corporations. We have great experience of international events in sports and entertainment and how to handle live broadcasts all over the world.Every event has its specific requirements. To meet each of these, Mediatec works in four integrated business areas, Outside Broadcast, Mobile Links, Production and Wireless/Camera Solutions. This enables Mediatec to supply adequate solutions for any broadcast. Mediatec Broadcast has an extensive range of outside broadcast units and production facilities. These include a fleet of more than 20 OB trucks, flight-pack facilities, studios, special cameras, 30-camera link systems, uplink trucks and fiber MCR’s.
Mediatec's track record reveals credits from large-scale broadcasts such as the Olympic Games in Sarajevo, Albertville, Lillehammer, Athens and Beijing, The Wimbledon Championships, The Nobel Prize Awards and Tour de France. To this should be added the experience as supplier to the host broadcaster for the Eurovision Song Contest, UEFA Cup Final, Champions League and IIHF World Championships.