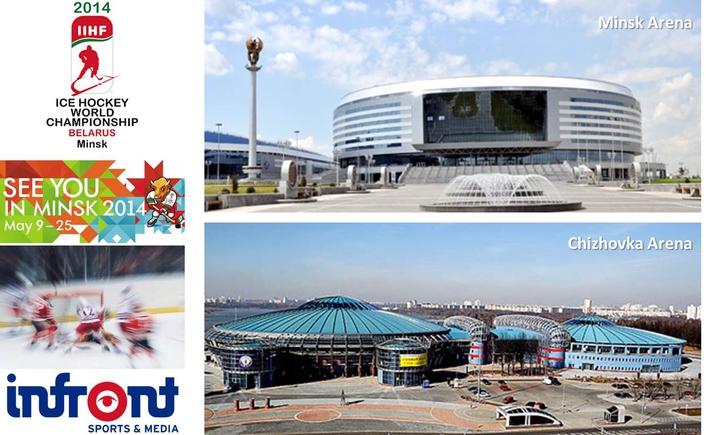 More than 115 territories will receive HDTV coverage, complemented by a live stream on www.iihf.com
When the 2014 IIHF Ice Hockey World Championship in Minsk, Belarus faces off today, fans in 115 countries and territories will be able to follow the event on TV – complemented by online coverage globally. In total, Infront Sports & Media, the exclusive media and marketing partner to the International Ice Hockey Federation (IIHF) for its flagship tournament, has closed agreements with around 60 broadcast partners on all continents.

Handling all forms of electronic media rights for the IIHF Ice Hockey World Championship on a global basis, Infront has distributed the television rights to over 115 countries and territories worldwide. Six CIS countries (including Georgia and Armenia) are newly covered through an agreement with MIR TV. In 2013, the event had achieved an all-time high cumulative television audience of 975.15 million.

Adding visibility in territories where no conflicting media rights agreements are in place, Infront will again offer a high quality video streaming service, which is fully integrated into the official federation website www.iihf.com. The flexible system allows live and on demand coverage for supporters to select games and highlights or subscription to a tournament pass (one-off fee of EUR 34.90), a ‘Follow your team’ pass (EUR 19.90) or a playoff pass (EUR 19.90).

More than 20 cameras shooting the action
The full host broadcast operation is managed and co-ordinated by Infront’s media production team and will include 20 cameras around the ice rink for every game, including ultra-high-speed, in-goal and overhead centre-circle. The HDTV signal will be produced, edited and transmitted by two outside broadcast vans, supported by an additional eight production trucks situated at the two arenas in Minsk. In addition, Infront will be providing support for broadcasters in their unilateral production, as well as with transmission and commentary facilities together with the provision of live statistics and additional services.

The Official sponsors: 13 loyal supporters
As in previous years, Infront has also reached a point of sell-out for the marketing rights. With a full complement of 13 international brands receiving a comprehensive rights package, the 2014 IIHF Ice Hockey World Championship is once again demonstrating its commercial value. Each of the brands receives exposure around the tournament as well as through diverse activation and promotional opportunities. The group is again led by main sponsor Škoda (car manufacturer) – now in its record 23rd year of partnership.

The 2014 IIHF Ice Hockey World Championship will be staged from 9 to 25 May at the Minsk Arena and the Chizhovka Arena.

About Infront Sports & Media
Infront Sports & Media is the most respected sports marketing company in the world, managing a comprehensive portfolio of top properties. Led by President & CEO Philippe Blatter, Infront covers all aspects of successful sporting events – including distribution of media rights, sponsorship, media production and event operation – and has won a reputation for its high standards of delivery. As the number one player in winter sport and with a leading role in football and summer sports, Infront enjoys long-lasting partnerships with 120 rights-holders and hundreds of sponsors and media companies. Headquartered in Zug, Switzerland, Infront has a team of 500 experienced staff working from 20 offices across 10 countries, delivering 3,400 event days of top class sport around the world every year.