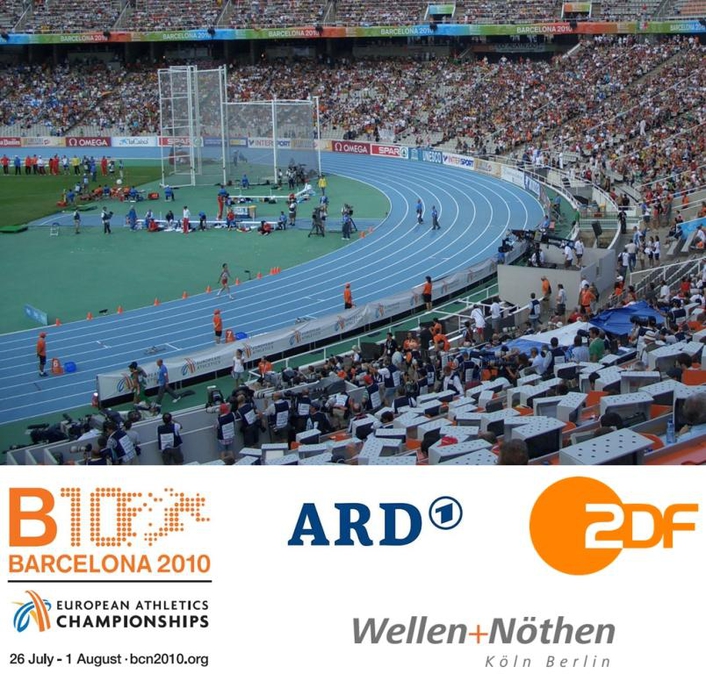 European Athletics Championships at Barcelona's Olympic Stadium
When it comes to producing major media events on TV, broadcasters need a large amount of media-related equipment quickly and for a short period of time. Because it is rarely economical for companies to buy in the required technology themselves, broadcasters and production companies rely on renting broadcasting equipment.

Wellen+Nöthen GmbH has established itself as one of the leading rental companies, equipping events of all types and sizes, including the European Athletics Championships in Barcelona. As technical partner to public broadcasters, the company again supplied ARD and ZDF with extensive technology for this event and therefore reasserted itself as the leading name in renting out broadcasting equipment.

“Our rental portfolio, which is tailored precisely to the needs of each of our customers, ensures the perfect complement to any equipment they already own,” explains Daniel Url, Commercial Director at Wellen+Nöthen. “We not only provide our customers with the technology they require, but purposefully plan and configure it to the corresponding production requirements. This makes it much easier for the broadcasters to integrate our equipment into the existing technical infrastructure. Our coherent planning and implementation expertise is certainly one of the key reasons why we were able to, once again, fight off national and international competition and deliver our services at the European Athletics Championships.” 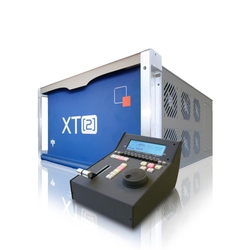 Various broadcasting components from Wellen+Nöthen were used at the European Athletics Championships, for example in the areas of signal processing, tapeless production, editing, directing and monitoring where these components were integrated in the ZDF mobile production unit (MPE) used by the TV broadcasters. A total of seven fully equipped EVS XT[2] HD servers from Wellen+Nöthen’s rental pool were used in signal processing. An external hardware RAID specially developed by Wellen+Nöthen for major sporting events provided additional capacity to the entire EVS environment to achieve an even higher redundancy level. The Avid installation was also extended using systems from Wellen+Nöthen. 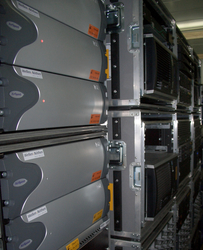 . The company provided the broadcasters with a total of 14 Avid AirSpeed systems including Dual Channel DNxchange. To enhance editing and storage capacities in tapeless production, six pre-configured Avid Media Composer Nitris DX systems and four Avid Media Composer software spaces were supplied in mobile flight cases. Since ZDF used Panasonic cameras to acquire its own material, the editing workstations were also equipped with P2 readers. The Avid Unity ISIS system was enhanced by a total of 128 TB using ISIS storage units for tapeless storage and processing of broadcasting material. For monitoring the master control and directing, around 20 full HD displays of 32" to 47" were used, as well as more than 30 LCDs from Sony and Eizo. Image signals were distributed using various Evertz MVP multi-viewer systems. For embedding and de-embedding processes, four fully equipped frames from LYNX complemented ZDF's existing glue equipment.

The rental equipment was shipped straight from the International Broadcast Centre (IBC) in Johannesburg to Barcelona after the FIFA World Cup. The function and quality of the equipment was thoroughly tested by two Wellen+Nöthen service engineers before being integrated in the ARD and ZDF system environment. One of these service engineers was available to the ARD and ZDF teams throughout the entire production process of the European Athletics Championships on-site for technical support of the Avid installation.

As a specialist in innovative IT and AV solutions, Wellen+Nöthen GmbH is one of the leading German retail firms in the broadcasting and media industry. With the strategic business divisions of Sales, Rental, System Integration and Service, the company offers a complete portfolio for the supply, integration and commissioning of conventional as well as complex standard and customized solutions. The range of products on offer embraces hardware and software from the world's leading branded manufacturers of media technologies, including Apple, Avid, Grass Valley, Isilon, Quantel, Sony and Vizrt. Wellen+Nöthen has also established a name for itself as Germany’s leading rental company, offering its customers a comprehensive equipment park. The company also sets new standards in the high definition sector: as a partner to its subsidiary HDinside, the company offers a broad and innovative HD rental portfolio. The spectrum of products and services is rounded off with professional services such as training courses, after-sales support and hotlines. With around 90 staff at its sites in Cologne and Berlin, the company looks after more than 2,400 German and international customers.