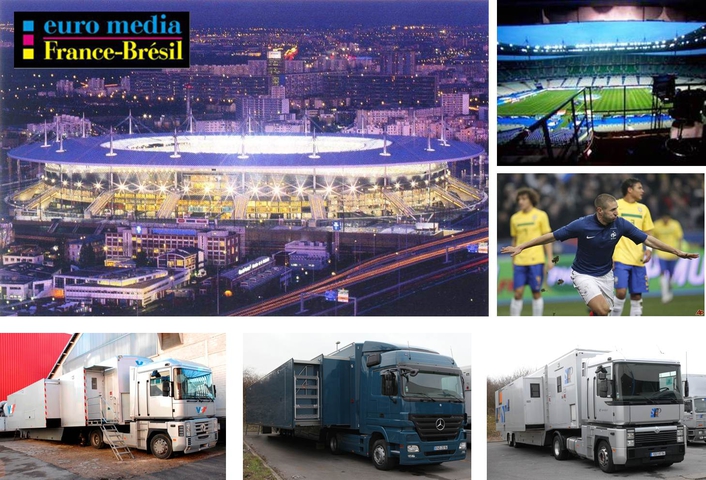 3 is not the number of goals scored in the France-Brazil friendly match on 9 February 2011, but rather the number of OB trucks deployed by Euro Media France at the Stade de France for the 14th match between the French and Brazilian teams.

Football encounters between these two nations always have something special: On the evening of 9 February, the Portuguese accents and chants warmed the hearts and ears of the French team, as did the carnival of Euro Media France-Brazil hats!

Almost 80 Euro Media France employees were at work to allow viewers around the world to see the images of this eagerly-awaited friendly (around 90 million viewers in South America alone).

In addition to the Euro Media France team the Symah team worked for TF1 on their unilateral signal. With its EPSIS application Symah provided the virtual packaging for the match, and the graphics for the new section entitled “l’œil de Liza”, in which presenter Bixente Lizarazu provided a score for a player over the course of the match. EPSIS is a real-time technology that allows the seamless insertion of computer-actuated images into a video sequence.

Currently Symah is providing the virtual inserts for the French men’s, women’s and under 21’s football teams.

Symah was also on hand to deliver the graphics for the under 21’s football match between France and Slovakia in the same week. With this match the French channel Direct 8 has set a new audience record for a friendly match: 814,000 viewers, with a peak of 1,003,000 viewers and national audience share of 3.4%!