“All Lit Up”: grandMA2 for Opening Celebration of the IRB Rugby World Cup 2011 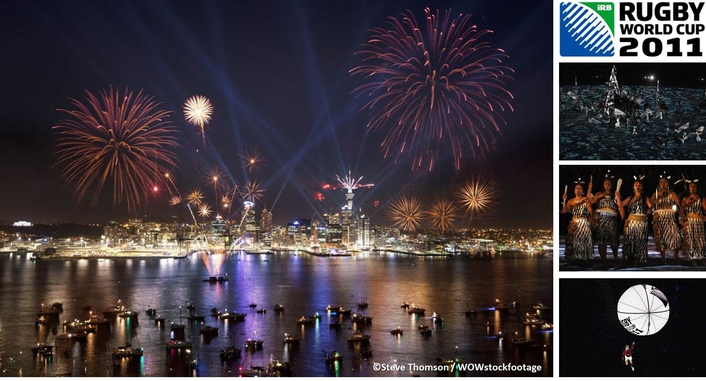 A custom wireless network was built in order to control the lighting system across the city and between the buildings
The IRB Rugby World Cup was the biggest sporting event ever to be staged on New Zealand shores. It kicked-off on 9th September 2011 with the Opening Ceremony at Auckland’s Eden Park, broadcast to a global television audience estimated at over 50 million. An estimated 200,000 people crowded the Auckland waterfront precinct to take in the visual spectacle aptly named “All Lit Up”. Lighting Designer David Eversfield relied on a grandMA2 system for control.

While the show’s lighting design in the stadium was created by Paul Collison, who worked with a grandMA2 system as well, Eversfield and the Opticshock team used 1 x grandMA2 light, 1 x grandMA2 onPC and 3 x grandMA 3D for the lights spread across the city.

Eversfield explained: “The waterfront show was pre-programmed using grandMA 3D where extensive use was made of the ability to have complete 3D models of buildings to create the skyline. As there was a great desire to keep the show as a surprise, only small parts of the rig were turned on simultaneously in the weeks leading up to the show. Much time was spent calibrating the orientation of the fixtures in the model to the physical install on the buildings. grandMA 3D was essential for viewing the show from different parts of the city, allowing focus positions to be tweaked without hours of travelling across the city. When onsite, grandMA 3D also proved a useful fault-finding aid as it provided rich visual feedback of what the console was telling the lights to do.”

“Across the city we had 25 different sites where lights were installed and they could be as varied as the rooftops of buildings, the ends of wharves, historical museums and the tops of port cranes”, described Eversfield. “It sounds relatively simple, because there were only a small number of lights at each location, but there were so many locations, each with its own access issues, rigging problems, power supply and so on.”

Co-ordinating a lighting system distributed over a 3 kilometre (1.86 mile) wide area also proved to be challenging. A custom wireless network was built in order to control the lighting system across the city and between the buildings. The show was able to be broadcast directly over the network while a custom back up system was developed and supplied by Artistic Lisence. Art-Net playback devices at each site would have the show loaded into them remotely from the control room. This could then be played locally if the network failed or became unstable.

Jonny Cross worked as operator, Kain Jones was the lighting project manager. Head of lighting was Mike Skinner, assistant head of lighting was Brian Mahoney. Kyle Pharo was responsible for the lighting network. Mike Mizrahi of Inside Out Productions was the event producer. As pyrotechnician worked Martin Van Tiel. The show was produced for the Auckland Tourism, Events and Economic Development.

The core of the lighting production was New Zealand-based but equipment was sourced from as far afield as China, Germany and the UK.  The system was assembled by the Opticshock team in New Zealand.