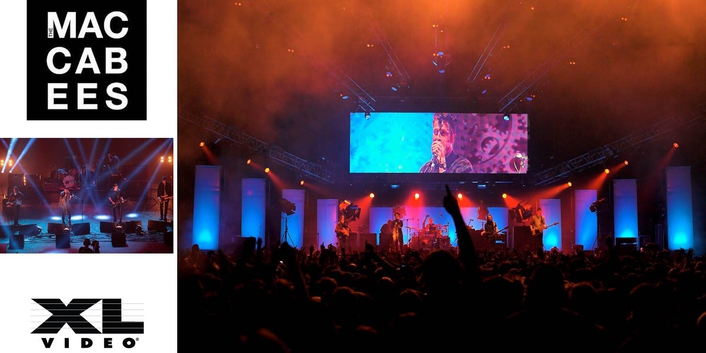 Five of the eight Sony BRC-700 robo-cams were focussed on the band members with the other three dotted around the stage
XL Video supplied LED screens, cameras, projection and an Encore screen management system for The Maccabees recent acclaimed gig at London’s Alexandra Palace. Video designer Josh Bagnall presented original, cutting edge and highly atmospheric  visuals for the show.

Bagnall’s past live music work includes inventive indie acts like Babyshambles and Bloc Party. For the last five years he’s worked extensively in feature films and the fashion world, and so brought a refreshing fusion of ideas from these disciplines to the show to meet the brief of creating a ‘non-conventional’ video aesthetic.

He also worked closely with The Maccabees’ lighting designer Phil Shaw, and together they presented a highly integrated ‘visual’ tone to the show. 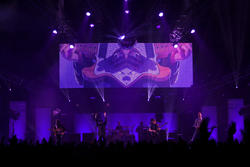 Says XL Project Manager Paul ‘Macca’ McAuley, “It was a pleasure working with Josh, who brought a very different approach to the video, which looked amazing and was exactly what the band wanted”.

At the back of the stage was a 9 metre wide by 3 metre deep section of Pixled F-15 LED screen.

This was mirrored each side of stage by two 20 ft wide by 11 ft high projection screens, masked off at the top to give a longer, narrower surface and a 1:3 aspect ratio. These were each fed by Barco 20K HDE projectors.

XL also supplied 13 cameras. Five were operated Sony D50s – positioned two in the pit, one each in the wings stage right and left, with the fifth a hand-held onstage. The hand-held was the most important and active camera in the show and was operated by Larne Poland, who has worked with Bagnall for over 15 years. A further operated camera with long lens was situated to one side, giving Bagnall a different angle to work with.

Five of the eight Sony BRC-700 robo-cams were focussed on the band members with the other three dotted around the stage, all giving a dynamic array of images and view angles for Bagnall to select in his PPU and create an epic cinematic feel that extended the stage and the energy coming off it right out into the audience. 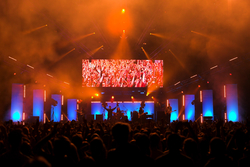 He added various organic effects including lens flare and stretched aspect ratios and also specified a magic DaVE effects machine from XL – a classic device from the nascence of live video, still well-loved for its grading effects among others, and preserved with considerable TLC!

From there, the 13 camera sources were all fed into the Encore, to be sized and output to screen.

The show started off with IMAG just on the outside screens. As the show built, layers of visuals were added gradually, with the centre screen introduced later in the set with maximum impact.

XL’s crew were Phil Leech who looked after the LED and Matt Vassillo who co-ordinated the cameras, projection and PPU. Both also operated cameras, together with two of Bagnall’s regulars.

Bagnall, who has worked on and off with XL Video since he was a teenager says, “I would always use XL as the video supplier. As I knew would be the case, everything – from the well prepped kit to the crew and all the pre-planning - was brilliant”.

The show was also a huge success for the band and everyone involved in the production.