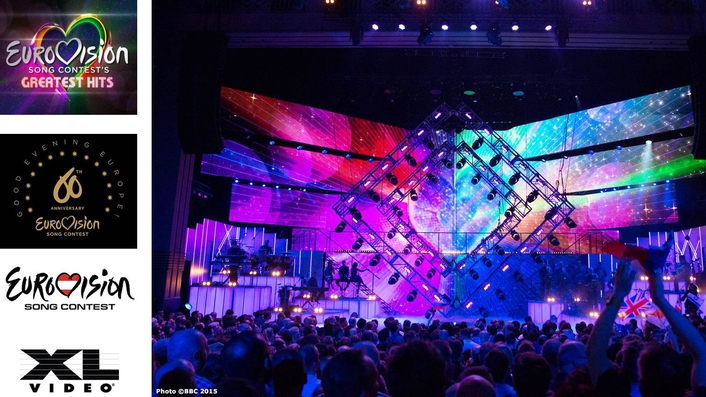 It is the time of the year for Eurovision fever… and to catch the buzz, get everyone in the mood and also to celebrate 60 glorious years of the Eurovision Song Contest, the BBC staged a special event at London’s Eventim Apollo, Hammersmith, “Eurovision’s Greatest Hits”, for which XL Video was asked to supply the Stage LED screens.

XL supplied two different types of screen. A hundred and ten square metres of high resolution ROE Visual MC-7T 7mm resolution LED screen was used upstage centre. The central part of the lower section of this was split in the middle and tracked on and off to form the doorway for stage entrances and exits. There were also six ‘wing’ sections (three per side), built from Pixled FX-11 11mm resolution screen.

For speed of assembly XL Video’s custom touring frames, renowned for their ease of use and quick rigging, were used where possible throughout.

The LED screens filled the whole of the upstage area and showed a mix of Graphics Playback and VT Broadcast Packages.

The star-studded line-up included recent winners Conchita Wurst (2014 from Austria) and Emmelie de Forest (2013 from Denmark), plus Finnish rockers Lordi (winners in 2006), Natasha St-Pier (France 2001), The Herreys (1984 winners from Sweden) and Nicole who represented and won for West Germany – as it was then – in 1982.

The show was a lively, colourful and fast-paced production in the spirit of Eurovision, with a very enthusiastic live audience, and was recorded on 31st March for broadcast on Friday 3rd April on the BBC and across Europe and beyond.

The first ever Eurovision Song Contest took place in Lugano, Switzerland in 1956 and present in the audience was the winner Lys Assia, - the only Swiss contestant to have won to date! It’s since grown into a huge cult phenomenon and one of the largest, most popular and spectacular pan European TV broadcasts.