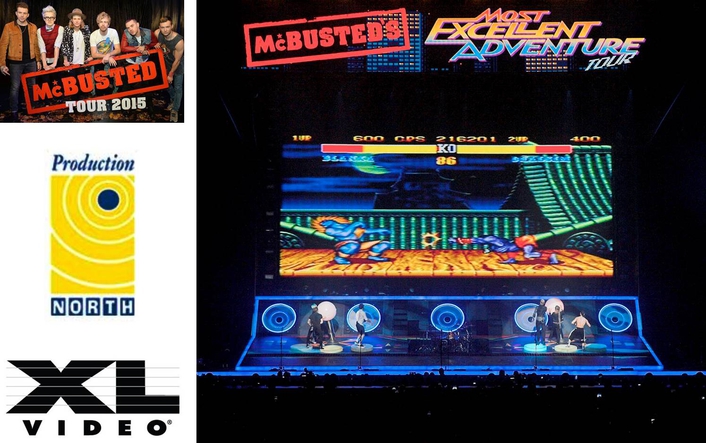 .
XL Video is sharing in the runaway success of supergroup McBusted, an energetic fusion of two of the most popular pop-punk-rock bands from the early noughties - McFly and Busted - which is delighting generations of both original and new fans, all equally exuberant, on their latest UK arena tour!

The show’s design and set concept is a non-stop, high-octane narrative set in a classic 1980s arcade games machine, which was the brainchild of Artistic Director Paul Caslin. He’s known both bands for around 10 years and has a background in video and filmic art, so visuals and moving image were always going to be prominent in the aesthetic, which also includes snippets inspired by renowned cult movies of the 1980s and 1990s like Wayne’s World, Back To The Future, The Mighty Ducks – the formative era in which they all grew up.

Production North is handling all the technical co-ordination. The creative team working alongside Caslin includes Stuart Merser from Vis-A-Vis Video, who is both the Video Director and Catalyst Operator, and Lighting Designer Vince Foster … all contributing to the fun, craziness and adrenalized thrill of a great show.

Unique elements include a giant sized fully-working and playable version of a classic games console which is part of the stage set.

The show is completely full-on from the moment McBusted launch into “Air Guitar” at the top of the set, from where the performance memorably rocks-out, steamrollering through their many hits with the band giving it absolutely 200 per cent right to the final chord of “Year 3000”. 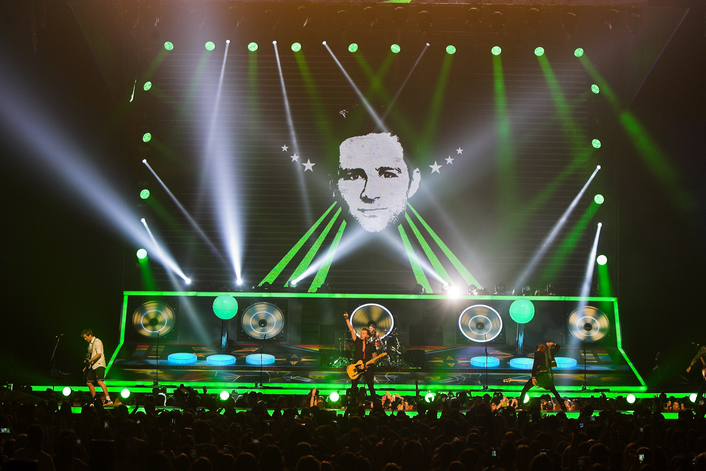 With the arcade machine design and Caslin’s desire for a retro look but using the latest technology, they needed a large upstage video screen, so XL – project managed by Phil Mercer, and tour Production Manager Iain Whitehead specified 350 tiles of Pixled F-12 LED product (arranged as a 25 tile wide by 14 deep surface).

Above that is an ‘active banner’ of Pixled F-12 making up the header of the machine – which is utilised for various complimentary graphics and very often song titles.

The selection of vibrant and cheeky playback content was all commissioned by Caslin and produced by Blink TV as pixel-perfect material. It was then programmed onto Stuart Merser’s own Catalyst V5 media server, running on the latest Mac Pro hardware, which is handling all the playback material.

XL Video is supplying four Sony HXC-100 cameras and a BlackMagic 2ME ATEM switcher on which Stuart is cutting the mix - a neat, lightweight piece of kit with inbuilt multi-viewer screens – which he really likes. 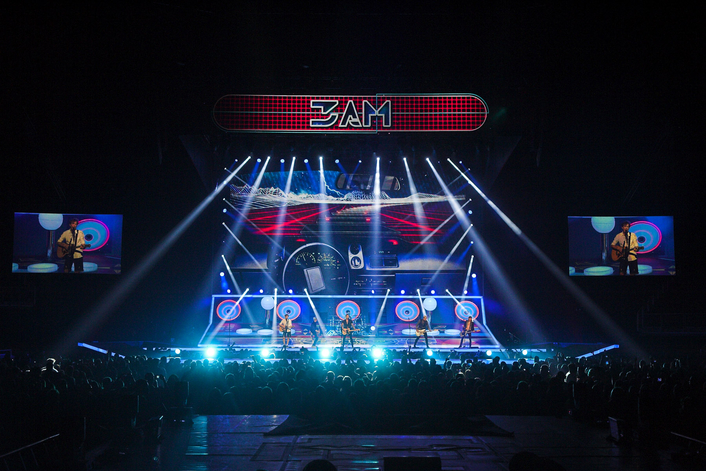 Stuart emphasises the importance of having skilled camera operators as a key to getting a great mix, especially on a busy show like this where he’s challenged to cover six super-animated band members, who, apart from drummer Harry Judd, don’t remain in one position for more than a nanosecond!

Both Tim Bolland and Phil Johnson, worked with Stuart on Il Divo, and he also has Patrick Vansteelant, another very experienced operator and regular XL crew member on this. “They are fantastic and I really appreciate their experience and flair,” he states.

One camera is positioned at FOH with a 70 box lens, two are on track-and dolly in front of the VIP area – created by an oval-shaped runway emanating from the front of the stage on which the band spend a lot of time charging around. These are both fitted with 22 x lenses. 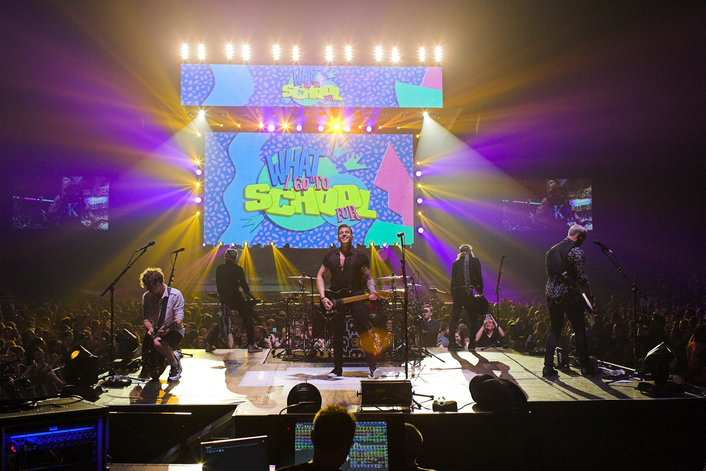 The fourth camera is fitted with Stuart’s own RF back and serves as a roaming hand-held fitted with a J14 x 4.3 wide angle lens. Operated by Phil, it lurks around the thrust and moves out to the B stage just in front of FOH to get all sorts of interesting and more off-beat shots of the band and the audience.

On top of these are three of XL’s own mini-cams on the tour, which Stuart describes as “The best mini-cams I have ever used”. The HDiye units feature a 2.1 megapixel DSP chip that produces full HDI 1920 x 1080 resolution at 60 FPS and a 3G HD / SDI output, and he first specified them for the Blink 182 tour last year. On this, two are focused on the main stage drum kit and one on the B Stage drum kit, which is also a full setup.

In addition to the LED screens, there are two side IMAG screens, each measuring 21 x 11.5 ft (16:9 aspect ratio) which are each fed by a single front projecting Barco 22K projector mounted on T-trusses. 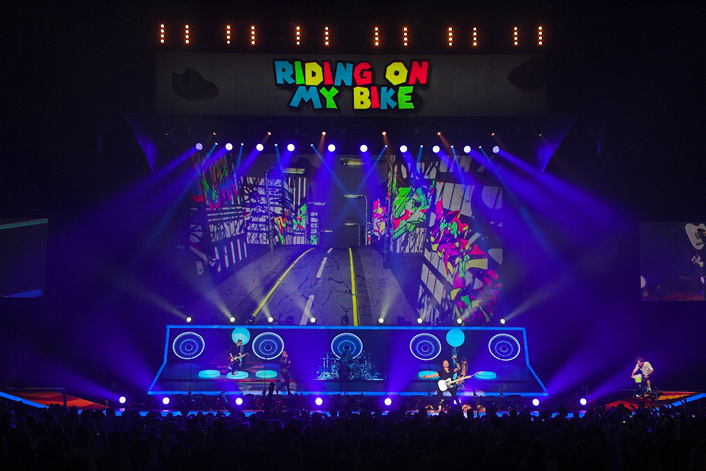 The cameras are multi-routed. Everything going onto the side screens is fed directly out from the PPU, while all sources going to the onstage screen and banner are channelled via the Catalyst, where some of the footage also receives additional treatments.

It’s a busy show with multiple cues, with some of the playback timecode triggered. To aid the task of mixing cameras and operating the Catalyst simultaneously, Stuart is using a special iPad app that he has devised.

Operating both together is an exacting task – especially at this pace - but he prefers being able to control the full visual picture rather than just component parts of it. It also makes it easier for Caslin to make any tweaks just by talking to one person.

As well as it being a great creative working environment for Stuart and his video team, there is a big upbeat vibe on the tour generally as the success and popularity of the McBusted collaboration looks set to continue for some time!

The many challenges have included getting the vintage games console 16-bit graphics working to best quality on the big screen for a specific part of the show, which engaged Stuart, Engineer Matt Vassallo and the Catalyst for a couple of days! 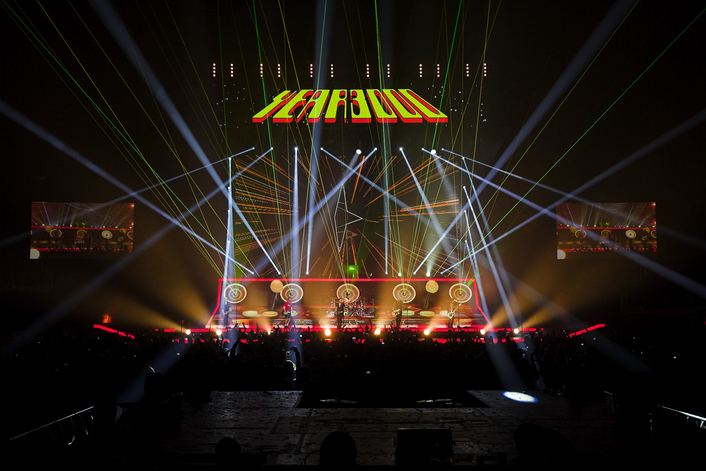 The stage set console is fully playable – the buttons are triggered by IR beams and the joysticks are micro-switch controlled, all wired back to a classic games console. The audio feed from the console is played out through the PA while the video feed goes to the big screen.

As far as anyone knows … it’s the largest ever working video games console ever built!