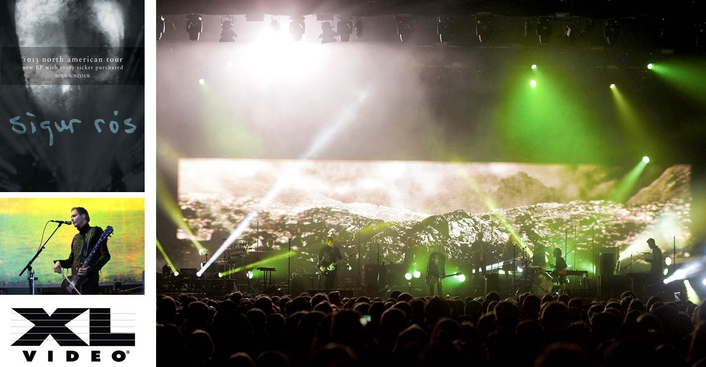 .
XL Video UK have again supplied all Video elements to the Icelandic band Sigur Rós for the latest UK and European festival leg of their World tour, supporting their new Kveikur album. XL has been constantly involved with supplying the band’s visual requirements for the current 18 month worldwide tour.

Sigur Rós’s provocative and interesting live visuals are a collaboration between LX and Stage Designer Bruno Poet, the band’s Artistic Director Sarah Hopper, Damian Hale the editor for Third Company and Video Director/Catalyst Operator Ray Gwilliams, all working towards creating a stunning visual look that both reflects and adds to their musical style for live shows.

Gwilliams has been supported on the road by Robyn Tearle, the two of them forming the tour’s core video crew.

Both of their roles have evolved since starting in May 2012, reflecting the fluidity of the video element as the equipment packages needed to deliver new ideas have also evolved, sometimes incorporating three sided gauze projection in front of different LED screen set ups.

The latest festival format - which also included some own headline shows - has featured a 16 metre wide x 2.25 metre high Pixled FX-11 11mm LED screen, giving a pixel surface of 1400 x 280. This was designed for segueing into ‘house’ festival systems.

The FX-11 screen has as usual proved very flexible - “It’s light and easy to manoeuvre and work with” comments Tearle. For convenience and speed of rigging particularly at festivals, it was built into XL’s touring frames. The modular construction gave them the ability to reduce the screen width, such as a smaller 14 metre wide option for the more compact stages.

The LED screen was fed by a Catalyst media server (also supplied by XL), and programmed with a fabulous array of custom footage produced by Sam Pattinson and Damian Hale at Third Company. 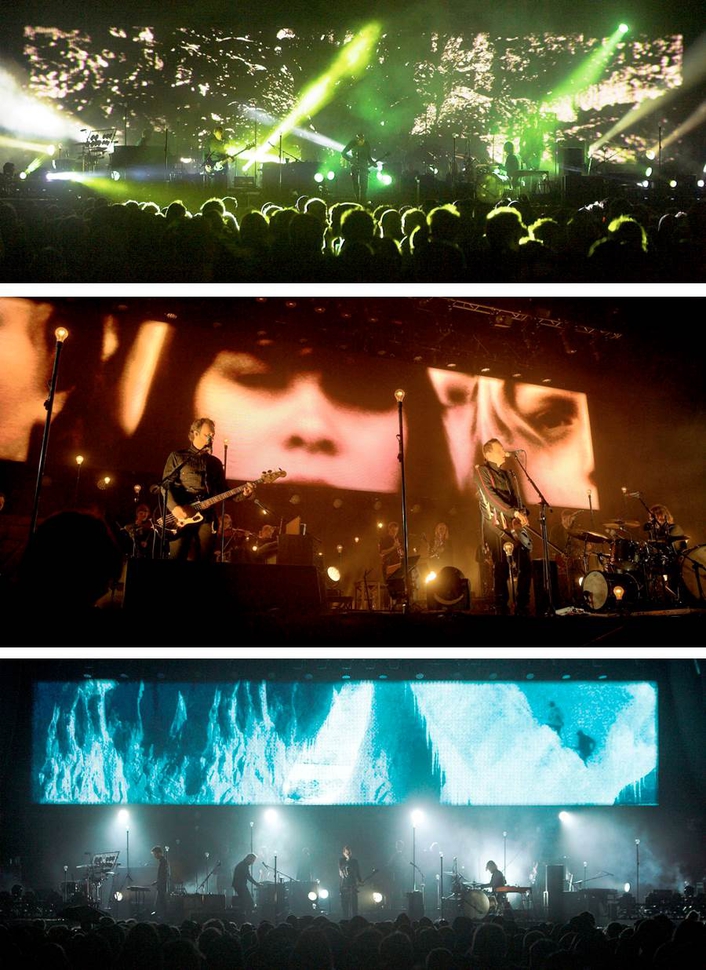 XL also supplied a 4 minicam package for this set-up, used for black-and-white wide shots in one song.

For festivals, Production Manager Derek McVay strongly supported Gwilliams and the team to developed their own ‘anti-IMAG’ style which would feed any side screens encountered on the run of shows to create their own unique look.

This used one Sony D50 camera positioned in the pit on track-and-dolly operated by Tearle, with two Sony Robo-cams stage right and left operated by the second video tech. Gwilliams cut the camera mix on the Camera Production unit (PPU) and used a Blackmagic ATEM Desk to mix the effects downstream of the PPU which included all the media server treatment and content keying.

Gwilliams has built his own camera effects rack which has two Mac Mini’s at the core which are used as servers within a Sonnet Xserve enclosure, one playing out the video content to use over their camera footage, and the other running Max6 Jitter which was used to affect the camera feeds live, making them blurred, grainy, coloured, etc.

XL Project Manager Paul Wood comments “Its an absolute pleasure for XL to be involved with and supporting such a ground breaking band who are renowned and loved worldwide, and having their very own style and artistic ambitions”.

For both Gwilliams and Tearle, Sigur Rós is proving a very interesting tour with a fresh and inventive approach to video and visuals, bringing its own new levels of flow and tempo to the performance.

The tour now heads to North America for dates in October before finishing in Europe in November, where for the UK dates the gauze and ‘anti-IMAG’ elements will be reinstated for the larger venues.