XL Video Goes With Plan B 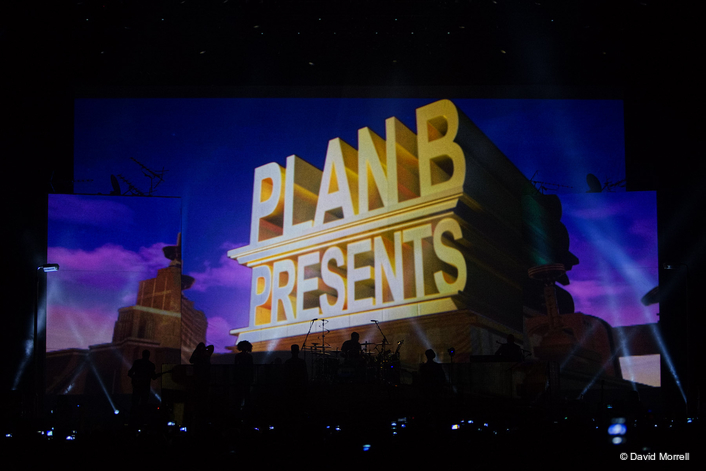 Plan B’s full involvement in the stage design assured certain things. As a hard-hitting film director with some serious cred and a successful acting career  … two things were assured – that there would be a large visual element, and that it would be innovative, provocative and different!

Creative Director and Lighting / Visuals designer Louis Oliver and Ben Drew developed the stage look together … and came to XL Video with a plan.

XL’s Project Manager Paul “Macca” McCauley demonstrated several options including the potential of effects like masking and mapping before they chose a hardware and software solution for the tour which gave the stage an epic cinematic appearance. 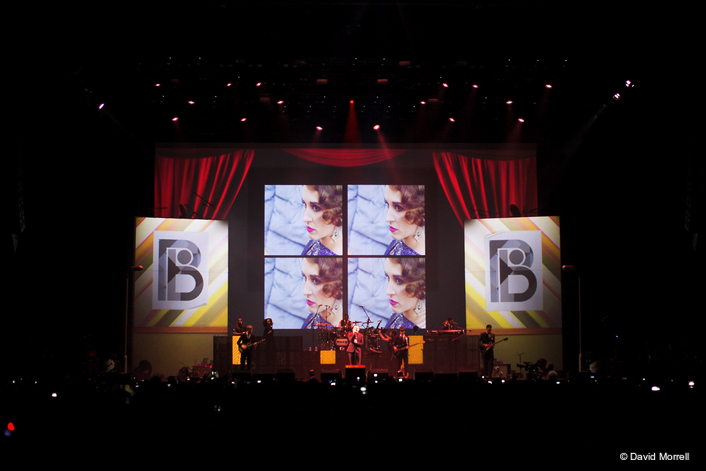 It featured a 50 ft wide by 30 deep upstage projection screen, flanked by two 20ft high and 12 ft wide three-sided 3D scenic towers each 6 ft deep which were also used as projection surfaces.  The towers were built by Perry Scenic. Then there was a quantity of LED screen at floor level in front of the backline.

The different video surfaces combined to make a visually intense environment which fused into the music and carried the narrative fluidly and lucidly.

With each song also containing its own intricate sub-plot, these mini-stories played out in its own right as well as being a part of the bigger picture which saw the show split into two halves, journeying from ’The Defamation of Strickland Banks’ to ‘Ill Manors’ – Grindhouse style!. 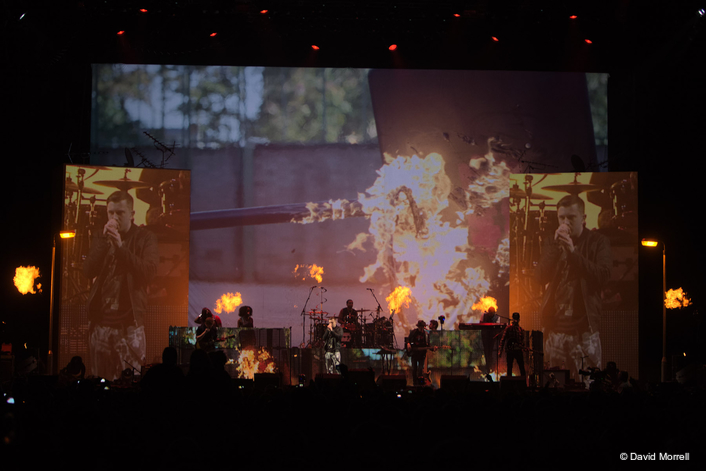 Cerebral yet completely straightforward at the same time!

One of XL’s new Barco HDQ-2K40 40K projectors was used to front project onto the main screen and another 40K was used to cover the front fascias of both towers. The inside surfaces of the towers were each covered by a Barco HD 20K machine rigged in the opposite tower. The outside of the towers were fed by two Barco R12s rigged on small towers or flown off to the side of the stage.

The LED screen on the floor was XL’s Pixled F15 with a two metre return on the sides, so it was almost surrounding the risers, mimicking the shape of the towers. 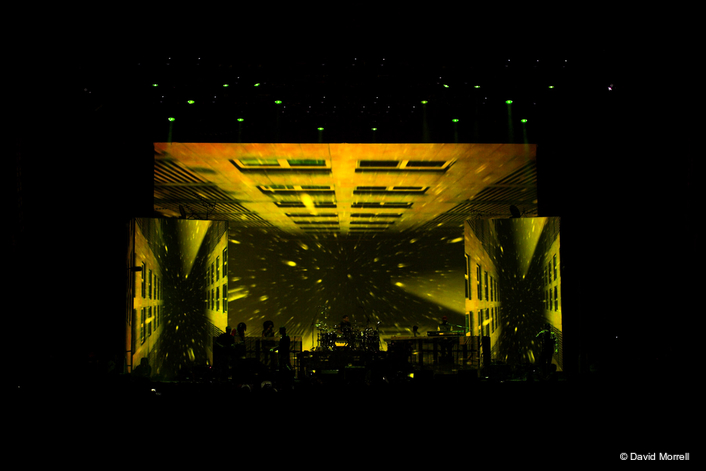 The set also contained street lights and a few other practicals and props all helping to set the scene and enhance the drama.

All the playback video content was produced by a combination of Oliver, Plan B, Farrah Drabu and Paul “Pablo” Beckett.

It included re-cut promo videos for ‘The Defamation of Strickland Banks’ album for the first half of the show, and special footage and a series of clips based on the hard-hitting ‘Ill Manors’ movie and accompanying hit album for the second half. 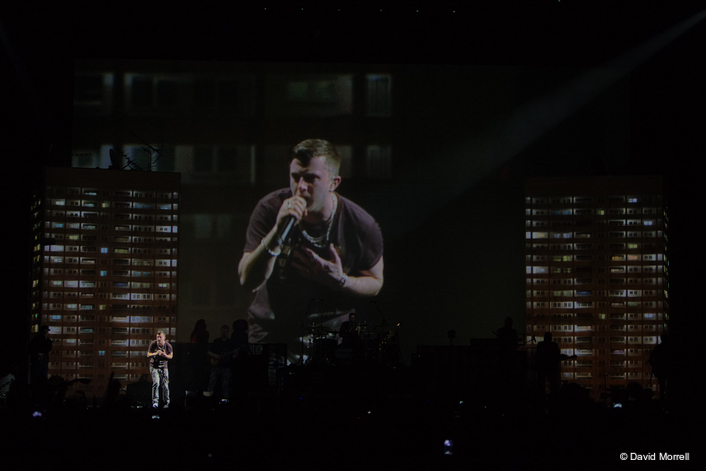 This was all stored on a Catalyst media server operated by Jack Banks using a grandMA2 lite console.

They utilised plenty of picture-in-picture effects, and comprehensive masking and screen management was completed in the Catalyst, resulting in the back screen and side tower being used as one massive surface or split up into different variations at different times, all adding to the general dynamics.

Eight HD camera channels – six Bradley Engineering Robo-cam feeds dotted around the stage, run by Gerry Corey, and two Sony HXC 100 operated cameras – one at FOH and one in the pit – were fed into the Catalyst, cut on-the-fly and output by Banks, all adding to the gritty aesthetic.

In addition to the live output, Gerry Corry oversaw ISO records from all the cameras to XL’s KiPro units for Plan B Enterprises’ future use. 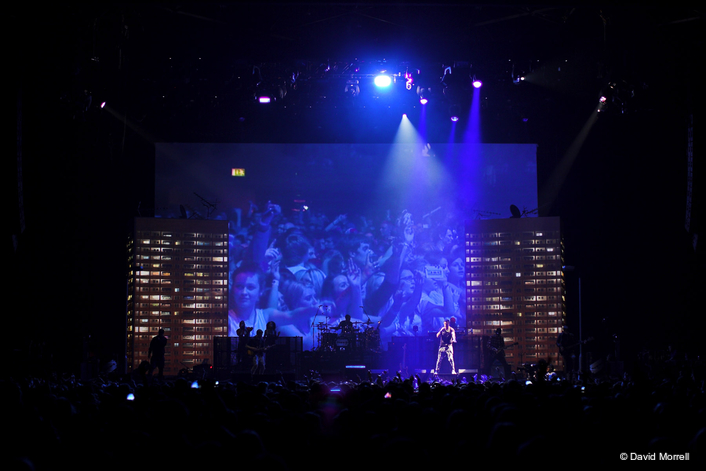 XL’s touring crew in addition to Banks and Corey were Richie Jewell controlling Projection and Gareth Manicom managing the LED.

For the London, Manchester and Birmingham shows, XL also supplied two 20 ft  by 11ft side IMAG screens and two extra crew, Ray “Moose” Shaw and Andrew Powell. The side screens were fed by XL’s new HD Barco 26K projectors which ensured super bright, sharp images. Moose cut the camera footage which was mixed with the playback content to the side screens, making them part of the overall show presentation rather than just IMAG.

Macca comments, “It is really exciting to be involved in such an inventive, video intense project as this. It was a great concept and we were delighted to assist in achieving some very cool results. Plan B’s filmic experiences bring many original aspects to the visual picture and he and Louis are a great team with whom we hope to work again in the future”.