.
XL Video renews its long standing working relationship with Depeche Mode supplying cameras, control, LED screens and crew to the band who have just kicked off the first UK and European leg of their ‘Delta Machine’ world tour, reaffirming their place as the most popular and successful electronic band in the history of pop music. 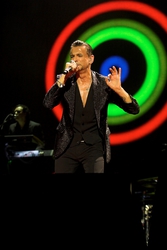 Front man Dave Gahan is as charismatic and flamboyant as ever, and the band remain right there in their element, performing in front of large and enthusiastic audiences in all corners of the globe.

Also acclaimed for being constantly at the cutting edge of live performance visuals, video has played a defining role in their stage shows over the years through the influence of their inspirational Artistic Director, Anton Corbijn.

The look of the Delta Machine show - incorporating the video elements - was designed by Corbijn in close collaboration with Lighting Designer Paul Normandale, a cerebral creative fusion that has brought another thought-provoking space for the band’s edgy, raw and emotionally charged performance to be enjoyed by a wide audience.

It’s the second tour on which Video Director Jon Shrimpton has worked with the DM in this role, and his third tour for them overall. He describes Delta Machine as “Witty, dark, bluesy … and with a nice vibe” and he’s aiming to bring all these parameters into an interesting camera mix.

In addition to the IMAG, Corbijn has produced eight beautifully sculpted mini-movies which are interspersed throughout the show – each specific, detailed and intelligent.

XL’s Project Manager Phil Mercer comments, “We are delighted to be working with Depeche Mode again. Their shows always push the technical and creative boundaries, and they have unquestionably set standards for several decades in terms of live music video production”.

The LED screen surfaces are all XL’s Pixled F-12 product. This is a particular favourite of Normandale, who was also the first visuals designer to use the product when it was launched last year, having specified it on many projects since. He likes its high resolution, light weight and general versatility.

The upstage F-12 screen is 17.4 metres wide by 8 metres high and is mapped as five interlocking triangles in the Catalyst media server that’s used to playback Corbijn’s movies. When this happens, it has a massive impact on the stage and the mood of the whole room.

The fronts of the two most prominent onstage risers are also clad with custom sized Pixled F-12 panels, and there is a V-shaped truss border of F-12 above the centre stage area. The two IMAG side screens each comprise 18 x 8 tiles of the same surface. 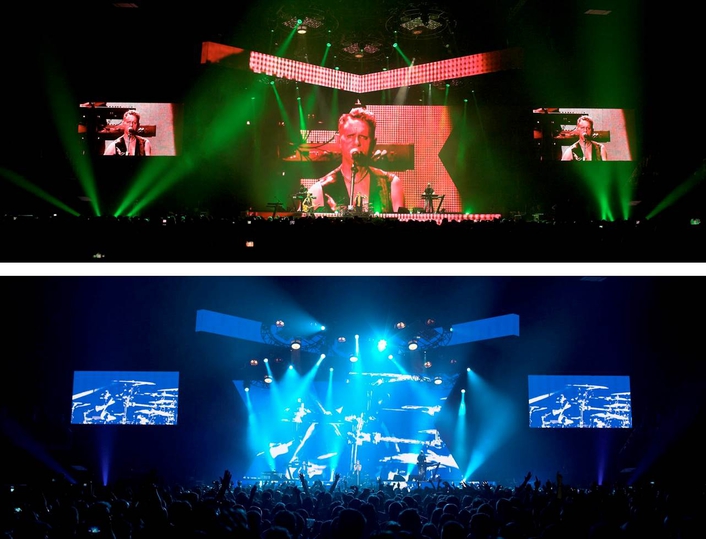 The cameras are all HD, with four operated Sony HXC-100s, two at FOH and two in the pit on track-and-dolly. This standard set up was chosen because it is straightforward and easy to transpose for the plethora of festivals they will be playing both this summer … and beyond!

Shrimpton is using five Bradley Cam-Ball 2s, which he originally used on Sigur Ros last year and really likes. They are positioned downstage right for the guitar, mid-stage right for keyboards, drums and singer posing area, plus one stage centre behind the drums to catch some dramatic reverse shots. The fourth is downstage left again for the drums and keyboards and the final one sits at the end of the stage thrust.

They have some neat effects including night vision, and Shrimpton operates them himself as well as directing the four Sony’s.

He has a few bespoke gizmos to hand, lovingly built from a range of vintage tube paraphernalia, which enable him to produce some unique bits of ‘magic’, like a claustrophobic feel during ‘Barrel of a Gun’.

All the cameras are fed into his Grass Valley Kayak mixer, one of his “Favourite pieces of kit in the whole world”. He uses it to apply multiple colouring and grading effects, and from there, six feeds are sent to Catalyst Operator Ben Miles who outputs them to the rear screen, the truss borders and the riser fronts.

The IMAG is sent to the side screens direct from the Kayak.

The nine-way camera cut keeps Shrimpton busy and energised during the show and his biggest aesthetic challenge is trying to balance all the different shots.

XL has a top crew out on the tour. John Steel is the Systems Engineer, Al Bolland is Crew Chief, Jim Bolland and Joe Makein are the LED Screen Technicians with Darren Montague as Head of Cameras.

The onstage LED, Camera / PPU package is being provided worldwide by XL Video and dates are currently booked until Feb 2014. 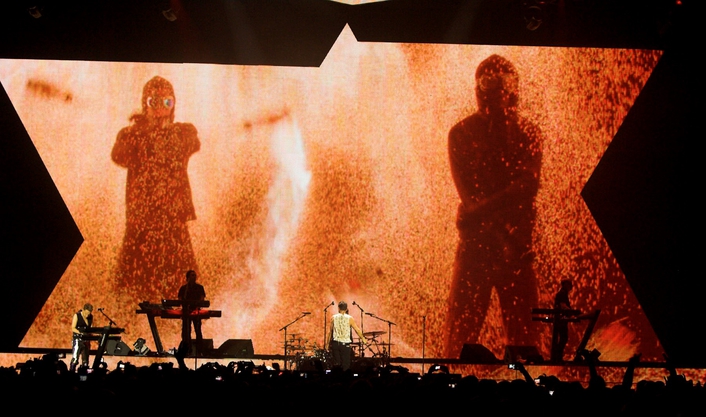