XL Video Brings a Glow to Red Rocks for Bassnectar

Surrounding the performers, a 16x8 tile LED screen was flown upstage
Continuing their work with some of the world’s highest profile EDM artists, XL Video worked with DJ/Producer Bassnectar to light up Colorado’s legendary Red Rocks Amphitheater with an abundance of LED, as well as supply control systems and crew for two shows in late May.

This year marks the 5th year Bassnectar has played at the renowned outdoor venue and Production Manager, Marc Immerman, contacted XL Video to ensure the video for the show would match the spectacular surroundings. 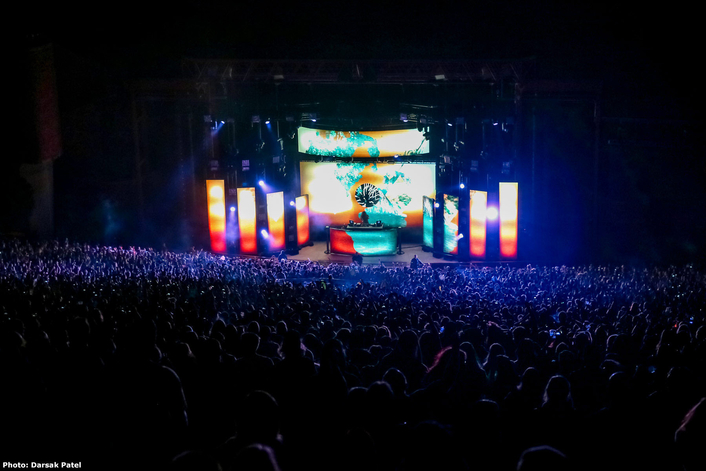 Mimicking the shrinking perspective of the venue, LED columns were arranged each 2 tiles wide, and 9, 8, 7 and 6 tiles high on each side of the stage.

Surrounding the performers, a 16x8 tile LED screen was flown upstage and topped with a convex curved LED header flown above the stage.

XL Video built a custom dolly for Bassnectar’s curved LED DJ booth which allowed it to be easily wheeled into place for the headliner’s set.

With a venue of this size and arrangement, it was important that the control system created a seamless link between front of house, stage control and the on-stage riser.

XL Video’s team, led by on-site Project Manager Norvin Maloney and Crew Chief Eric Escujuri installed a solution using Lightware MODEX TX/RX kits which  transferred the signals from the client’s own media servers at front of house. These were coupled with a Lightware 16x16 Matrix which fed the LED processors.

To enable Bassnectar, his VJ, Max Chang from V Squared Labs and his backline engineer to easily monitor the on-screen content, XL Video utilized a Barco ImagePRO-II scaler/converter to pull out a region of interest on the back screen which was then converted to SDi and transmitted to displays on the DJ riser, and to the team at front-of-house. 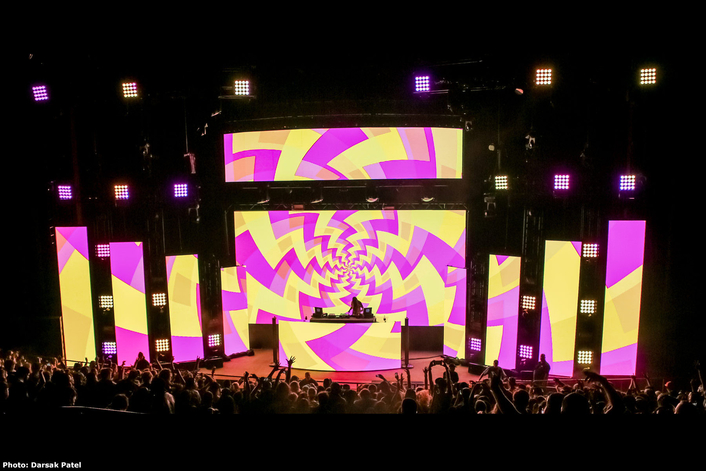 This ensured all the crew were completely in sync with the visuals and the music across the huge venue. This was backed with Fiber networking, using Cisco Managed Network Switches between stage control, front of house and the DJ riser.

Gareth Jeanne commented: “Red Rocks is an iconic venue, but it does also present some interesting challenges for live video production. Our crew - Eric Escujuri, Julian Ruiz and Darsak Patel – more than met the challenge; collaborating with Bassnectar’s team through four days of rehearsals in Denver and then installing our smart control set-up and outdoor LED screens at Red Rocks. The resulting shows delighted the assembled audience across both nights!”