XL Creates a Sky Full of Video for Coldplay 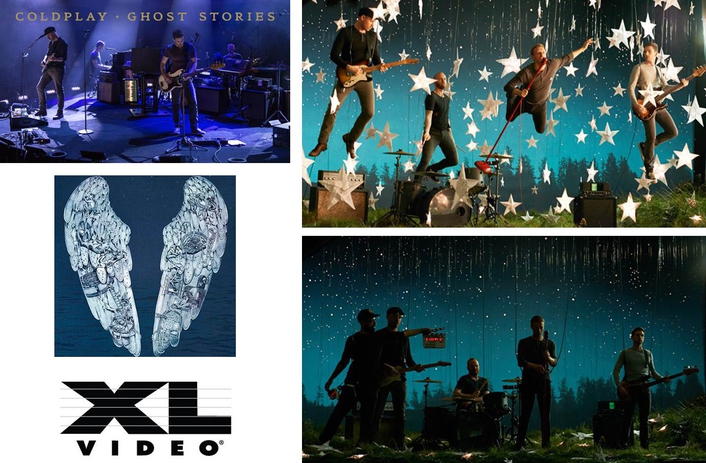 Setting the Scene
The visual concept for these shows was developed jointly by Ben Miles, Paul Normandale, Misty Buckley and Phil Harvey.

The shows were managed for XL Video by Project Managers Phil Mercer and Gareth Jeanne. In contrast to their Mylo Xyloto stadium shows, the performances for Ghost Stories called for an intimate ambience, bringing the audience closer to share the new songs.

For the global album launch event at the Sony Pictures Studios in LA, XL Video were asked to create a planetarium-style 360 degree projection all around the space and across the entire celling above. To achieve this XL supplied 46 Panasonic PT-DZ21K projectors controlled by eight newly purchased AI I8 media servers (four live and four hot backup); the largest number of projectors XL have ever used on a single show.

This very first album preview featured a small central stage and the majority of the projectors were positioned on the floor around the venue, feeding a total projection area equivalent to six 4K surfaces. The resulting show created an atmospheric visual spectacle. Against this backdrop, the band played the album in its entirety, together with a selection of their most popular hits.

Promo Touring Package
The promotional tour dates, which spanned four continents, were all supported with a core video package from XL that varied from gig to gig. Says Phil Mercer, “The fluid and dynamic nature of these assorted promo events meant we often had to react to special requests at very short notice, which is always an exciting way to work! Some great teamwork and communication between our various international operations ensured that all expectations were met worldwide”.

The package, specified by Ben Miles, featured 6mm LED screens from XL Video in front of which Miles hung a BP screen made by Hangman to soften the appearance of the LED and make it more projection-esque. 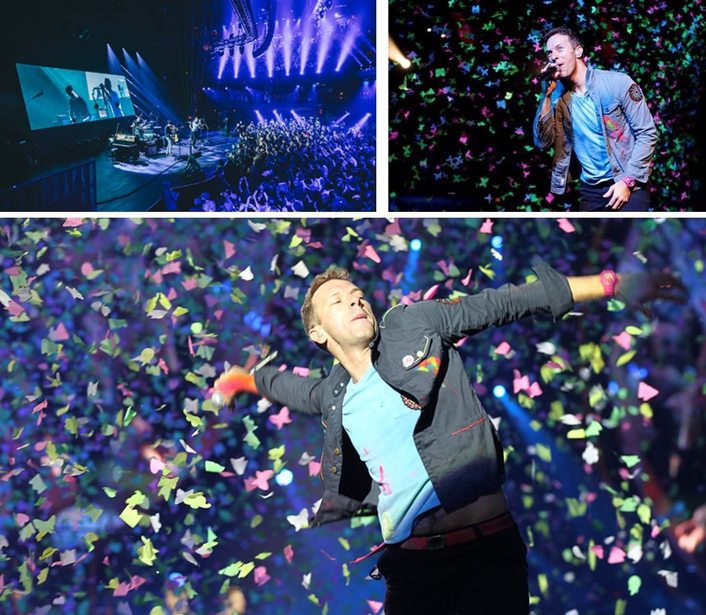 A Catalyst media server ran all the playback footage and six mini-cams which were fed into one of XL’s new Roland V1600 mixer / switchers, chosen for its small size, flexibility and power.

The cameras were three Bradley Cam-ball 2 robotic units and three Gnat HD mini-cams, the latter more commonly used for medical and military applications and which XL Video has customised to make them tour-able.

Both these types were specified for their small size because, for the original telecast, it was essential that they were discreet and virtually unnoticeable. Both also have a range of interchangeable lenses available and were dotted all over the stage, used for a variety of band close-ups and some more unusual angles on the instruments.

One of the Bradleys was rigged on a fly bar to give the fantastic over-stage shots which were a key to Miles’ ‘Ghost Stories’ screen vision. The Bradleys were used for reverse shots of the band’s guitar players when playing keyboards and synths and then in other positions to give an IMAG of the band’s kit.

The Gnats were positioned on various instruments including a self-playing piano, where the camera captured shots of the keys playing whilst Chris Martin was at the front of the stage. One was used for the Reactable – an electronic musical instrument with a tabletop Tangible User Interface played by moving the tangibles around. The distinctive backlit display was highlighted by a Gnat on a stand immediately above to give the audience a visual insight into how the synthesised sounds were being produced.

Royal Albert Hall shows
For the 2 sold-out Royal Albert Hall shows, Ben Miles specified that the projections would cover the venue’s iconic acoustic mushrooms. This was the first time that they had been mapped for a music show. Miles described the opportunity as “a bit of a no-brainer”, and thought it would be an ideal and very cool way to continue the immersive projection thread from the album launch show. 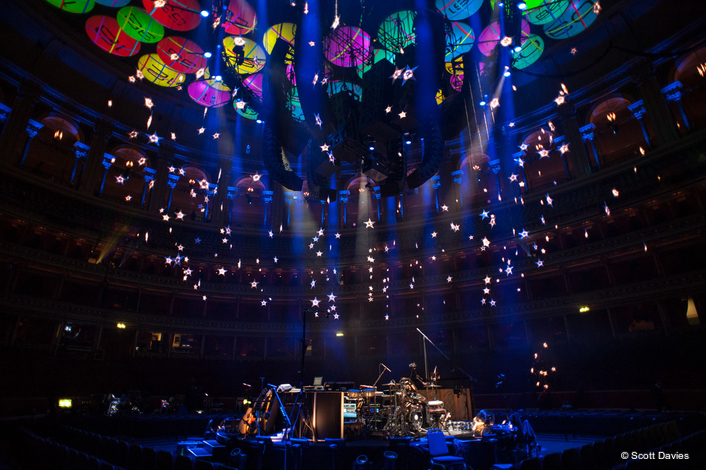 As that original gig was a TV show with an invited audience and therefore far more controlled, they were able to put projections in locations that would normally be out of bounds. When it came to the Albert Hall, a lot more lateral thinking was needed to find the best solution.

XL supplied 16 x Panasonic projectors for this, all offering 1920 x 1200 HD outputs and the images were again mapped using four of the latest AI S8 media servers (two live and two hot backup), chosen for their superior mapping capabilities and because each one offers 8 HD SDI outs. 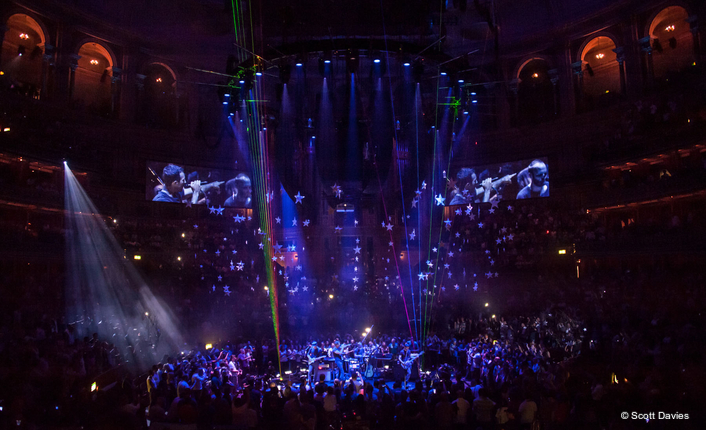 The projectors were rigged in various upper level boxes and focussed into the roof. Each one covered 4 – 6 mushrooms and the playback content used in LA was reformatted for the RAH shows.

“It looked fantastic,” says Miles adding, “It was great to be working with XL as always. A serious amount of hard work went into all the shows and the RAH in particular to get it looking as good as they did. All credit to Phil and Gareth and all the XL crew on site. 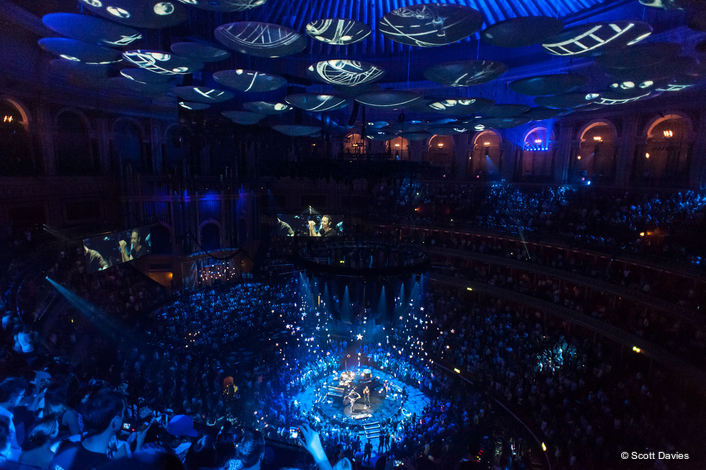 In addition, XL supplied a Kayak switcher and PPU for Miles to cut the mix – to which seven operated broadcast-quality Sony HXC-100s were added to the six minicam feeds, making it a 13 camera shoot. The operated units were dispersed around the RAH.

Two custom-built 30 ft wide by 10ft high IMAG screens were installed either side of the venue’s famous organ, each fed by two more Panasonic projectors. 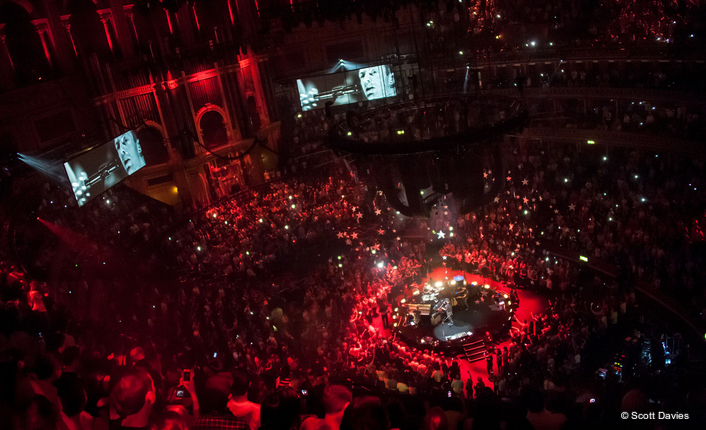 Miles also had a Catalyst media server in line which he used to specifically treat the IMAG feeds, applying colour, desaturation and for creating other ‘ghostly’ style effects to make the images edgier and more interesting as opposed to a traditional IMAG look.

XL also installed an extensive fibre system for control data which involved an enormous amount of cabling, the management of which was another element needing careful planning. 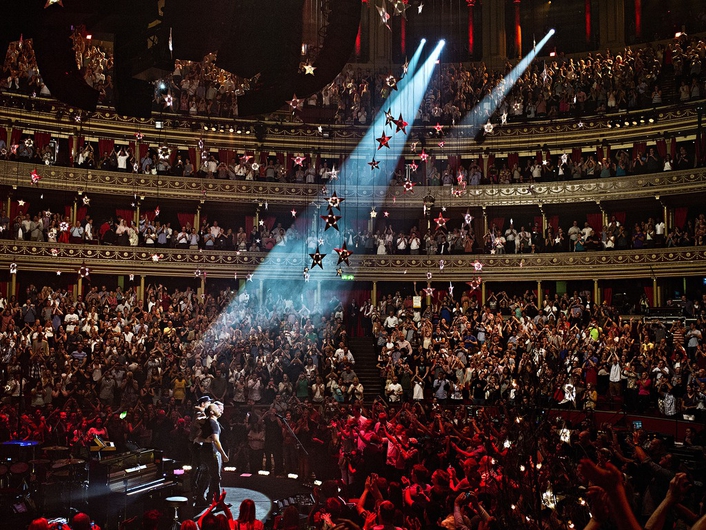 Phil Johnson chiefed the 24 XL crew at the RAH. The team worked tirelessly under pressure to get the show on. Johnson also oversaw the projection installation there and at Sony Studios and looked after all Ben Miles’ requirements on the promo tour. Clarke Anderson crew chiefed all the other elements for the RAH including the camera system, IMAG screen installation and data network.