Stuart was asked by Boe’s new management company Vector Management to direct the live video on the strength of his intricate and powerful work for Il Divo.

Over time, he has developed a distinctive visual aesthetic which works extremely well with this classical / musical theatre / pop crossover genre of music and style of performance, and ahead of this tour, he talked extensively with Alfie himself and the tour’s Production Director Dave Nelson, before presenting a series of ideas for how video might work in a live concert context.

It was already decided that there would be no LED screens or onstage video, so the idea was that IMAG combined with some carefully crafted pre-recorded footage should capture the vibe and ambience of the performance, and also assist in scene setting for different segments of the two hour show.

Stuart supplied his own Catalyst media server front end control and asked XL Video to supply a 3 camera PPU and side screen projection system, plus a requested crew. “I use XL for all my live projects,” he states, “The company is excellent in all aspects, and I would not even consider any alternatives”. 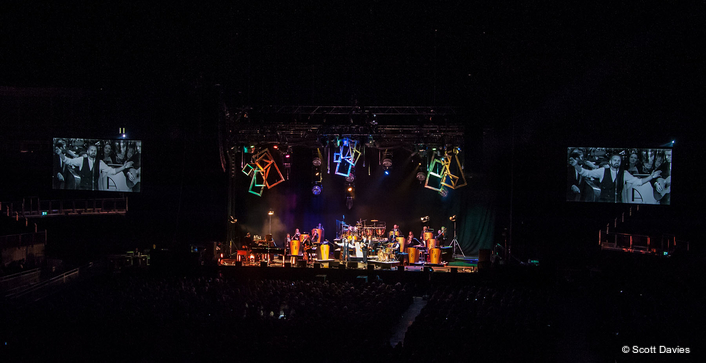 XL supplied three Sony HXC-100 HD cameras and a Blackmagic Design 2ME mixer / switcher. The cameras were positioned at FOH, one in the pit on track-and-dolly and one hand-held onstage.

Initially two cameras were positioned in the pit, but after the first show, Stuart realized that there was so much action happening onstage – including the 21 piece orchestra with prominent double bass, plus band with guitars, two drum kits, percussion, honky-tonk and grand pianos, accordion, etc. - that he needed a roving camera in the area, so operator Tim Bolland stepped up to the mark and moved onstage, using a 14 – 4.3 wide angle lens.

The pit camera was operated by Gordon Davis, who had the whole 60 foot front edge of stage to himself, making full use of the track.

Stuart’s camera mix brought a classic cinematic feel to the show. There was lots of sepia and black & white, together with elegant noir-esque contrasts using the blacks and flare of the cameras, all of which augmented the diverse moods and genres of the music. At other times he introduced a flickering, juddering analogue film style with quirky manual effects like hair-in-the-gate.

In some cases the IMAG was collaged with VT footage to preempt the upcoming music, a technique that proved particularly effective for the format of this show.

The Catalyst stored all the playback VT, and all the masks, effects, vignettes, etc. were keyed in over the HD feeds in the Blackmagic mixer – a method chosen for its zero latency and huge flexibility.

The mix was beamed onto two 21 x 11 ft side screens each fed by one of XL’s new Barco 26K projectors, which Stuart reckons are “Super-punchy”.

Joining Stuart, Tim Bolland and Gordon Davis on the road was Engineer Saria Ofagba. “All top crew and we made a great team,” comments Stuart.

Alfie Boe’s live video presentation required much thought, precision and attention to detail. Bringing classical / pop alive onscreen is completely different to mixing a pop gig, and as Macca commented, “The end result was quite an achievement for just three cameras”.