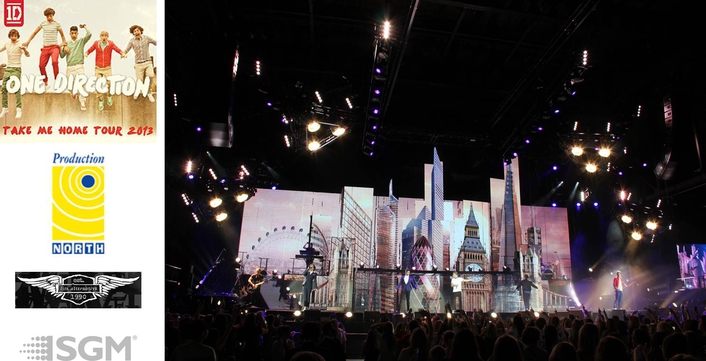 Paul Normandale builds 30 fixtures into cityscape arena design
As boy band sensations One Direction (1D) embarked on the much anticipated 117 date Take Me Home world tour, the tried and trusted production team of Production North, Lite Alternative and Wigwam were brought in to turn the cityscape arena concept of creative designer, Elizabeth Honan, into reality.

Lite Alternative’s highly creative production designer Paul Normandale used 30 of SGM’s new X-5 white LED strobes for the first time, replacing conventional xenon-driven devices. And after evaluating them over the first leg of 34 shows stretching across the UK and Ireland, he vowed that it certainly won't be the last.

Supplied by SGM’s UK and Ireland distributor, A.C. Entertainment Technologies (AC-ET) Ltd., the strobes are largely mounted on vertical pipes and bases, positioned under two special ramps, stage left and right, and used mostly for “impact and accent”, according to Normandale. “They had to be sufficiently bright to register over a big LED wall situation,” he said.

The two-layered LED wall sections themselves comprise an 84ft x 30ft back screen and a moving LED 70ft skyscraper in front, with a flying bridge.

The show is flashy in every sense of the word. In order to prove the X-5 strobes had not only the power output, but all the attributes that the designer was seeking, AC-ET travelled north to demo several new effects to the designer at Lite Alternative’s base in Lancashire ahead of the tour.

“Although there is nothing wrong with the industry standard strobes when suddenly something like this comes along you have to sit up and take notice,” said Normandale. “From production rehearsals onwards, we have really put these strobes through their paces. They have plenty of power and it’s great to have a strobe that doesn't thermal out at all and just doesn’t stop running.”

Programmer and board operator Dave Hill has been developing a new personality for the fixture on his Hog 3 desk enabling maximization of the full potential of the fixture’s three individually controllable LED segments. These are derived from nearly 3,000 pure white LED’s, making it possible to create effects never delivered before by a strobe.

The strobes are one of the features of an LED set split conceptually across three sections — and broadly based on a London theme. At one point the band is transported aerially to a second stage via a tracking platform (that resembles London Bridge).

After Europe 1D will tour two of its major markets US and Australia through the summer before finishing up in Japan.