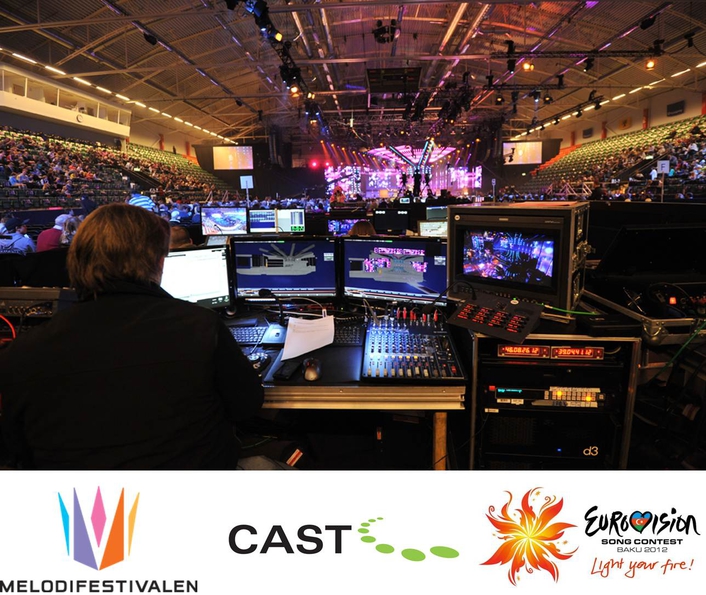 The 2012 assembly was as eclectic as ever, bringing together all varieties of music from rockabilly to hard rock
The award-winning wysiwyg previsualization suite from CAST Software of Toronto, Canada was an outstanding force in the recent Melodifestivalen 2012. Melodifestivalen is the annual Swedish song contest that determines Sweden's song to be internationally represented in the Eurovision Song Contest. This year’s Melodifestivalen began February 4 and the Finals were held at the Globe Arena in Stockholm on March 10.

Lighting Designer Fredrik Jönsson used wysiwyg for the lighting of 32 songs from all over Sweden, with a total of 6 live broadcasts by SVT (Swedish Television) from Växjö, Gothenburg, Leksand, and Malmö, a second chance head-to-head in Nyköping and the final 10 duelling at the finals in Stockholm. Pre-programming was done in Jönsson’s office, Eyebrow Designs AB, in Stockholm starting in December.

“I use wysiwyg to design the rig and simulate the camera shots so I can be confident that I have coverage in all angles. The camera production of this show is almost 360 degrees and we have a lot of positions out in the arenas so it is very important that I have all the angles under control when the deadline for the design comes. During the tour there is no time for major changes in the rig. Moving a truss is not an option once in the arena. We also do shows in ice sheds were we usually have weight issues, so it is crucial that the rig is 100% correct when time for load-in arrives. Without wysiwyg I wouldn’t have the control on these issues that I have today.”

He continues, “We also do a preproduction week with both console systems connected to wysiwyg just before first load-in so the operators get to know the rig and sort out any patch issues. Since I divided the rig into two systems, where in some cases, two operators are controlling different lights on the same truss, there can be some address and patching problems to eliminate. During the preproduction we also create identical cuelists for all 32 songs in both consoles, which are extremely helpful when we’re getting out in the arenas and start programming for real. Without the wysiwyg sessions in preproduction, we wouldn’t sleep at all during the tour. It’s a lifesaver.”

Sweden has been competing in the Eurovision Song Contest 52 times since its inception in 1956, with its most famous entry in 1974 with ABBA’s “Waterloo”. The production standards have always been high and the bar is raised every year.

The 2012 assembly was as eclectic as ever, bringing together all varieties of music from rockabilly to hard rock, boy bands and even death metal growling. The lighting design kept pace thanks to Jönsson’s attention to detail.  “We try to appease the artists as much as we can,” says Jönsson, “Some bands want as much flash and pizzazz as we can throw at them. And then there are songs like Loreen where excess lighting would have detracted from the performance. It’s usually a smooth consultation process because many of the artists know what works and what doesn’t. But wysiwyg is very beneficial in helping to reach a common goal.”

One particularly innovative performance was the song ”Amazing” by the artist Danny and his five backup dancers, who wore custom designed suits trimmed in LEC lights, allowing them to glow on stage. This effect took special care from the lighting team, to allow visibility of the suits while still balancing the lighting needed for the cameras.

“Since the brightness of Danny´s suits dictated the levels of light on the stage in order to get the suits to be seen by the cameras, it was difficult to light the act like a “proper” dance act with all the effects you usually see. We had to keep the lighting on stage to a minimum, yet enough to get proper exposure on Danny´s face, which led to some tricky work for the followspots. In the end we went for a tight soft spot on Danny when he was singing the verses in close-up, and then switch to a followspot filtered with lavender for the chorus and big dance moves. To that we added a low sidelight in dark blue and an overhead backlight in lavender just to get some contrast in it. On top of that we used mainly Sharpys and VL3000 Spots in open white for big aerials overhead in order to keep the “club feel” in the larger shots. The camera engineer also worked the iris and contrast of the cameras non stop during the performance to keep the suits bright at all times.”

The final performances get a percentage of winning votes from an expert jury and the rest from call-in votes from the Swedish population. In the end, Loreen won with her song “Euphoria”