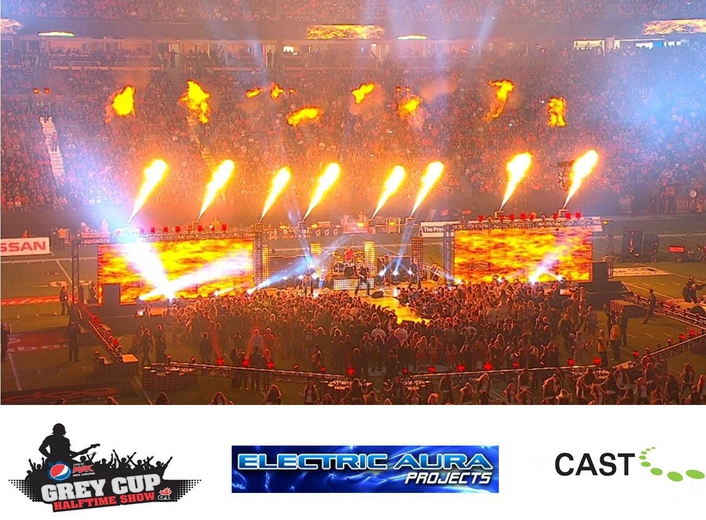 The creative concept for Nickelback’s performance was a stage erected center field with the set made up of Jarags
The award-winning wysiwyg software suite from CAST Software of Toronto, Canada was the clear winner at the 99th Grey Cup, the Canadian Football League's championship football game between the East Division champion Winnipeg Blue Bombers and the West Division champion BC Lions. The game was held on Sunday, 27 November 2011 at BC Place Stadium in Vancouver in front of a live audience of 54,313 and broadcast live to over 4.5 million viewers.

The hugely popular Vancouver-based rock band Nickelback performed for the Pepsi Max Halftime Show, playing songs off their albums All The Right Reasons, Dark Horse, and Here and Now. Production Designer for the halftime show was Robert Sondergaard and TV Lighting Director was Jason McKinnon, both of Electric Aura in Vancouver.

Sondergaard used wysiwyg R27 Perform during the whole design process to communicate the design look to the show producer, Patrick Roberge Productions as well as Nickelback. He explains, “In the lead up to the Grey Cup, there were a number of parties in a variety of cities who needed to know what the setup on the field was going to look like; the producer, the band and their management, sponsors and so on. wysiwyg once again proved to be an effective tool to create a realistic render of what the set, lighting and on field LED video screens would look like so that everyone could sign off on the creative look.”

The creative concept for Nickelback’s performance was a stage erected center field with the set made up of Jarags stacked like blocks, flanked by Martin LC video screens on both sides. A catwalk extended from the stage out into the audience. Lighting consisted of over 150 Martin MAC moving lights. Control for lighting and video was delivered via W-DMX from 4 grandMA Light consoles, 2 grandMA NSPs and 2 Vixen Media Servers, programmed by Shaun Forbes. System Engineer was Jason Bolger and Production Electricians were Charles Arrata, Corey Proulx, and Ken Reckahn.

One of the challenges of designing in BC Place was the recent renovation of the stadium, which included the upgrade and modernization of the facility, with the highlight being the new retractable roof that turns BC Place into a year-round, open-air facility and a new architectural signature for the province. BC Place's cable-supported roof is the biggest of its kind in the world. The stadium is also now the home of the world's second-largest center-hung LED video screen.

Sondergaard continues, “One of the great features of wysiwyg is its ability to import Google SketchUp files.  I was able to find a model online of the newly renovated BC Place Stadium, and I used it to accurately show where the lights in the seats were going to be placed in the render. BC Place had also just undergone reconstruction including a new retractable roof, so I was also able to show people who hadn’t been in the building what the new video screen would look like and how the new LED interior lighting would make the roof feel enormous.”

The end was a victory for all parties involved, except for the Blue Bombers, who were defeated 34–23 by the Lions. Both the game and the halftime show were deemed a huge success.