The steel stand is 33 metres wide, 55 metres long and 7 metres high
When Studio 100, producers of the hugely acclaimed and highly successful 14-18 Spektakel Musical wanted to move a 2000 seater audience tribune up and down a 150 metre long performance space throughout the show … they called Hans Willems of Wicreations!

Who else! Willems and his team at the engineering and automation specialist, based in Heist Opt Den Berg, energised themselves to help bring a world class production right home to Mechelen, one of the many places at the centre of hostilities during the carnage and devastation of the First World War which started a century ago in 1914.

The laser controlled seating tribune that moves nearly 2000 audience per show 90 metres up and down the 150 metre long performance space in Mechelen’s Nekkerhal is just one of many technical WOW factors.

The seating tribune makes 13 moves back and forth throughout the show at different speeds and distances as the drama – sung live to a special backing track by Dirk Brossé and Allard Blom recorded by the Royal Flemish Philharmonic Orchestra – unfolds.

The unique aesthetic that 14-18 Spektakel Musical’s creators - Frank van Laecke, Dirk Brossé and Allard Blom of Studio 100 - wanted to share with their audiences involves taking them collectively in and out of the scenes and playing area. It is a combination of classic musical and movie treatments on a basic level, with the moving stand being the zoom of the camera and an additional vehicle for opening up the playing space and distancing everyone from the action … or closing it down for additional intimacy.

Wicreations applied their usual mix of ingenuity and engineering magic to produce three major production elements: the tribune, the 11 moving and repositionable scenery wagons and the control systems.

This involved three disciplines – the mechanical construction and design of the stand; the design and build of the set pieces and the automation and control of both. The process started in 2013, and with a separate Project Manager assigned to each element, it was a resource-hungry but extremely rewarding project. 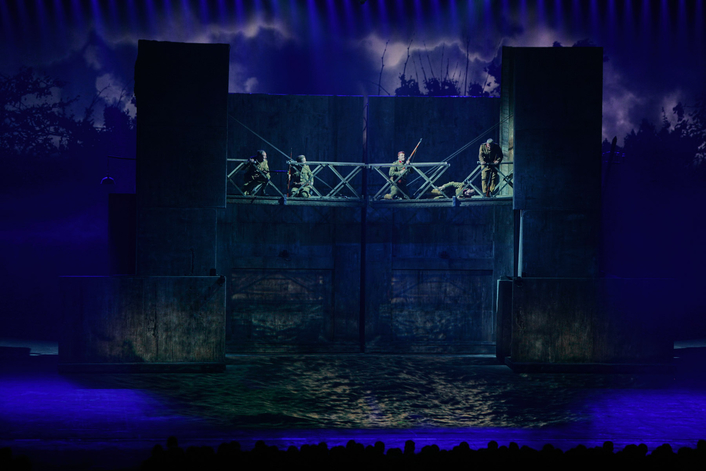 The steel stand is 33 metres wide, 55 metres long and 7 metres high at the back and can accommodate 1880 people with full wheelchair access.  It weighs 135 tonnes empty and 270 tonnes at full capacity.

The first of many sets of calculations undertaken were completed by external surveyors to establish the strength and integrity of the Nekkerhal floor, after which Wicreations and its R ‘n’ D team started their part of the design process.

A second phase of calculations dealt with all the dynamic forces of the stand in motion which were checked and approved – every part of the structure was subject to these using Finite Element software.

The whole structure rests on 368 wheels, so getting the right ones was fundamental! Each powered wheel can hold up to 2.8 tonnes and the supporting wheels 3.2 tonnes.

The structure is actually moved by 24 of Wicreations’ rental stock drive motors which are based on UK manufacturer Kinesys’ Evo system – each of these drives two sets of wheels. The maximum speed is half a metre a second and the units are smooth so the acceleration / deceleration is mega smooth once the motion has started.

The stand’s position is determined by laser eyes which position it with millimetre precision in relation to 55 markers on 3 metre high poles anchored into the concrete and running down the length of the venue. These guide the stand and all the scenery trucks into the correct positions for each cue. The poles are located so that the laser eyes of every moving element can simultaneously see at least three markers and receive its correct positional co-ordinates. 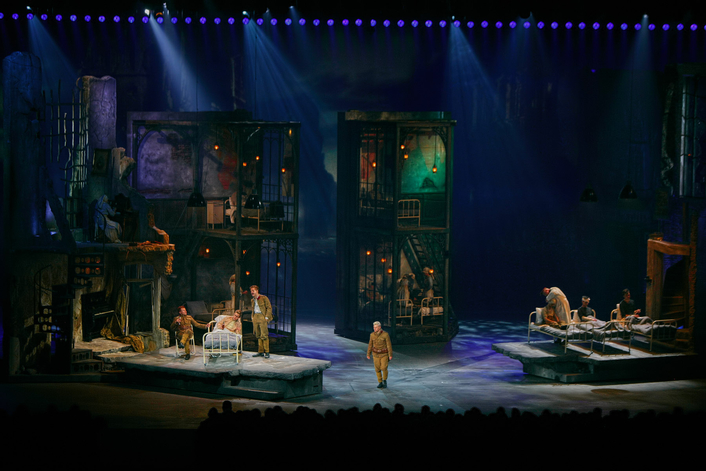 The laser guiding control is a customised version of a system made by Swedish theatrical and opera specialist Visual Act, which has been specially hot-rodded by Wicreations. This monitors all the information in realtime and, if necessary, adjusts the tribune’s and scenic wagon’s movements to keep them on track.

An impressive cable festoon was devised to provide a neat and practical solution to manage the approximately 4.5 kilometres of cables needed to power the moving stand and run control data to lighting, audio and video equipment. With the stand and the FOH control positions moving … it couldn’t just be plugged in and left like a conventional set up.

One hundred and twenty metres of Wicreations’ WI-Track product was installed into the roof on the left of the tribune and the 175 metre cable festoon is attached beneath.

There are 46 different positional cues for the set pieces and tribune in the show which are executed by operators Sam Melotte and Tim Beckers.

The innovative set which comes together like a giant multi-faceted jig-saw to form numerous complex scenes was designed by Stefaan Haudenhuyse, Art Director at Studio 100 who worked closely with Wicreations’ Project Manager for Set, Yves Vervloet.

The 11 automated set wagons, all of which have a minimum of two faces, move into multiple positions throughout the show. Two have hinged parts which lower on Wicreations’ zero-speed motors – also controlled wirelessly via the Visual Act system - into a horizontal setting to form the trenches. 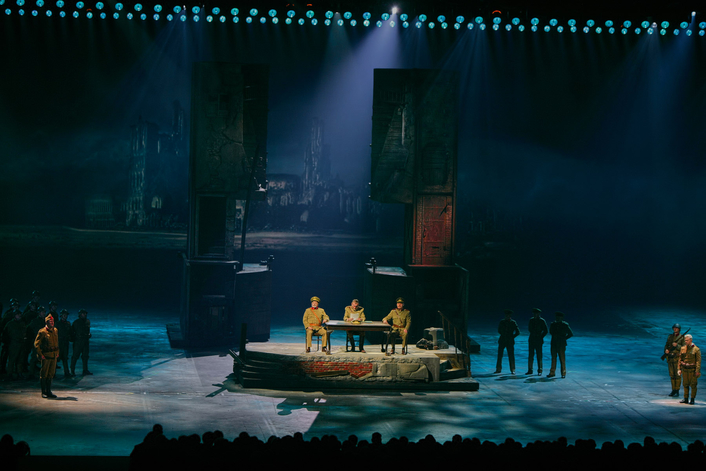 The 6 x 2.7 metre bases of these set pieces are all customised. Each contains a state-of-the-art drive unit from Visual Act specially modified for this application and house all the technical kit including the laser navigation system, WIFI receivers, batteries and power distribution to all the many practical lights integrated with each wagon / set piece. Wireless DMX data control for these practicals shares the same WIFI network as the laser control for the wagons.

Constructed on top of the bases are eight different types of steel towers, some as large as a small house which required extra parts to be added to some of the base frames.

The capacity of the 11 wagons was calculated individually to ensure stability and strength.

The towers vary in weight from 3.2 to 4.6 tonnes, and the strikingly detailed scenic elements designed by Haudenhuyse were built and finished by three different companies – Caramba Décor, Atelier C19 and Phixion – all commissioned by Wicreations.

A key to oiling the wheels of this process was to produce very detailed sets of 3D modelling, a task undertaken by Wicreations’ Yves Vervloet and colleague Dries De Roey. 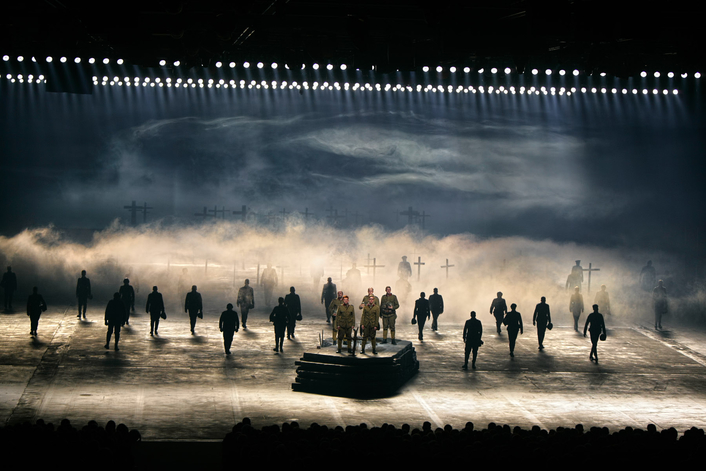 All communication for the set wagons is beamed via a dedicated 5GHz WIFI network -  installed by Wicreations in consultation with a wireless comms specialist - at the FOH position at the top and back of the seating tribune which ensures a strong and robust signal.

The 4 week intense, 24 hour around-the-clock programming and commissioning of the complete system, right up to opening night was supervised by Wicreations’ Automation Project Manager Geert Stockmans.