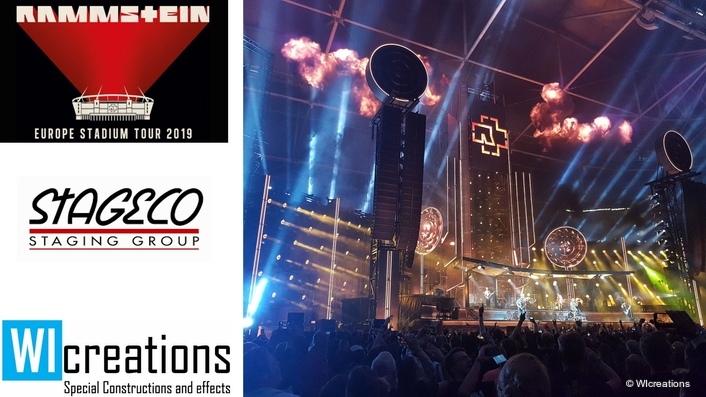 Rammstein, known for their spectacular pyro and fire-fuelled shows, full-force industrial metal sounds, uncompromising sometimes controversial lyrics, their thrilling, hair-raising hi-energy live performances and adversarial commercial success … release their much-anticipated self-titled new album. Entertainment engineering specialist WIcreations is delighted to be working with the band and their talented production team on the current three-month stadium and festival tour around the UK and Europe including Russia and Latvia.

WIcreations seized the opportunity of working with one of the highest profile live bands on the planet to launch its new integrated WImotion system … which gives precise control and synchronisation of individual and group moving chain hoists utilising SIL3 group position monitoring.

WI, well known for their own industrial strength automation and engineering solutions, was asked to supply several custom staging and automation elements for the tour.

All this is being co-ordinated for WI by Koen Peeters and Hans Willems, who were asked onboard by the tour’s technical consultant Jeremy Lloyd of UK based Wonder Works.

They have worked closely with Rammstein’s own creative team, a collaboration between lighting designer Patrick Woodroffe from Woodroffe Basset Design (WBD), production designers Wieder Design Studio and Wonder Works. The band themselves are also very involved in their stage presentations.

WI has designed and built six back-wall structures which are part of the set and contain integrated lighting elements. 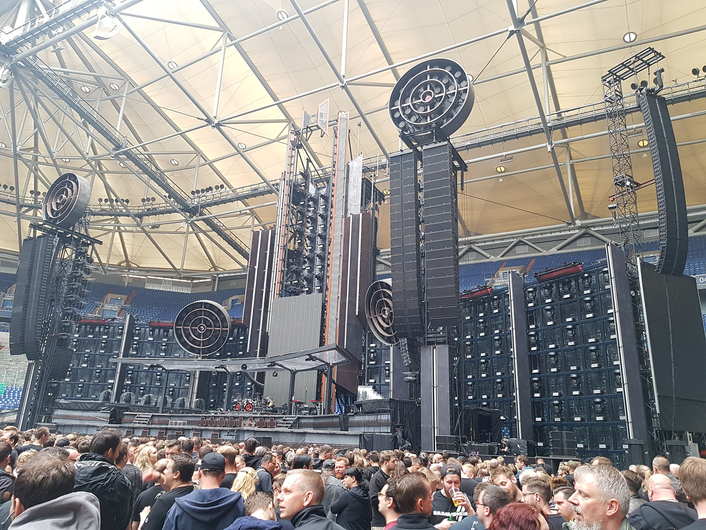 All the lights are rigged on integrated mounts that slide over the grid structure and into place. WI’s design means they remain on the structural beams during transportation, making it extremely fast to install these six major structural pieces.

WI has also created a set of ‘Tron Fascias’ as they are called, eight in total, six of which are in between the back walls, with two rigged on the main left and right pod towers, and two more on the upstage pod towers.

All the Trons have integrated RGBW led strips and ColorForce LED battens in bespoke waterproof housings.

The fascia’s vertical splits were dictated by the dimensions of the LED battens, with 42 units of the 72 inch version and 10 of the 48 inch version, all integrated.

All the Trons and the fascia structures have digitally printed scenic panels … to guarantee a consistent look and to add durability. Manual handling is minimized because all the Wi-elements travel in dedicated custom touring dollies, allowing them to be loaded in and out from these by their own overhead-rigged chain hoists … whilst being guided in vertical tracks. 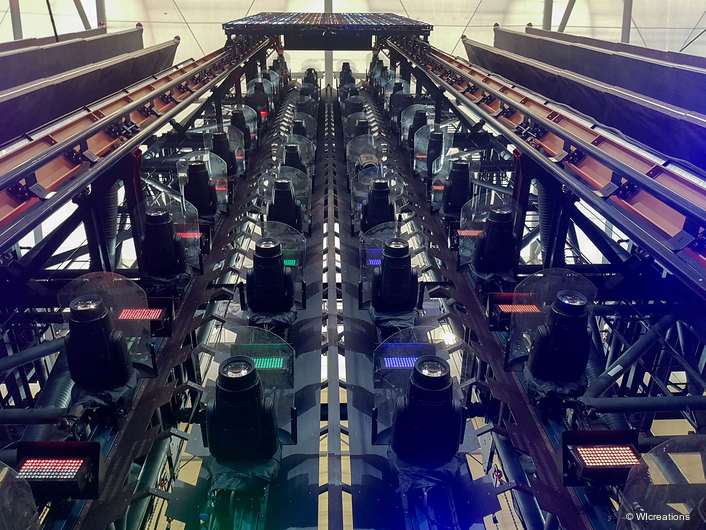 The 400 square metre central tower - which has 23 x fascia panels in two stacks of 11 and one stack of 10 on the front – is also a WI construction. This is made up from four vertical rails, each loaded with 11 x Robe BMFL moving lights and 10 Solaris Flare strobes.  These lighting fixtures all feature individual weather protection.

Talking about lights, each of the main sound towers is outfitted with another 10 x Claypaky Scenius moving lights on the onstage side, and five Ayrton K25s on the upstage side. Again, these individually weatherproofed moving lights travel up and down guiding rails on bespoke carriages, making installation extremely neat.

WI was also asked to create an easy-to-rig system for 10 kabuki drops. Six of these are deployed in the back wall area, with four more on the freestanding field towers.

The kabuki frames each have four integrated kabuki brakes. They can be loaded with the drapes and rigged from ground level and are transported in their own custom built touring dollies. 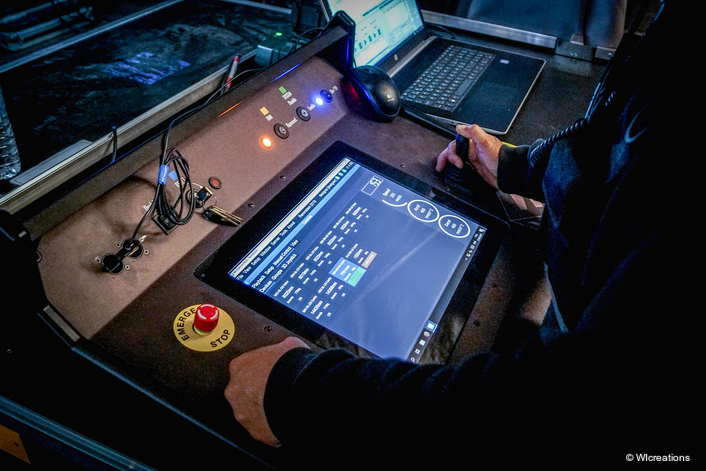 As an addition to the StageCo-built band roof, production commissioned WI to create an easy to rig yet neatly integrated pyro trough along the downstage edge (of the roof), which holds a variety of pyro and flame devices complete with related wireless control electronics.

The centrepiece of the main tower is formed by a 5 meter wide by 9 meter high HD video screen that moves 27 meters up and down the tower. The screen is wind braced and guided along a set of vertical rails to allow an in-use wind loading of 15 metres-per-second.

To top off this demanding but hugely exhilarating project, WI created a scenic lift platform that raises the six Rammstein band members 26 meters above the main stage.

A total of ten 1250kg SIL3 WImotion hoists are used to move the video screen and band platform. Both can travel at speeds of up to 0.4 metres per second.

The WI-hoists are controlled by the WI-VSD-SIL3+ controllers. These multi-purpose WImotion controllers guarantee a SIL3 safety level.

At the heart of this machinery system is the WImotion controller which deals with the individual and group synchronisation of all the moving chain hoists using SIL3 group position monitoring.

MCA allows for the easy setup of group halt options, enabling a ‘position lock’ for all motors in a group and to set the maximum group and individual channel loads. 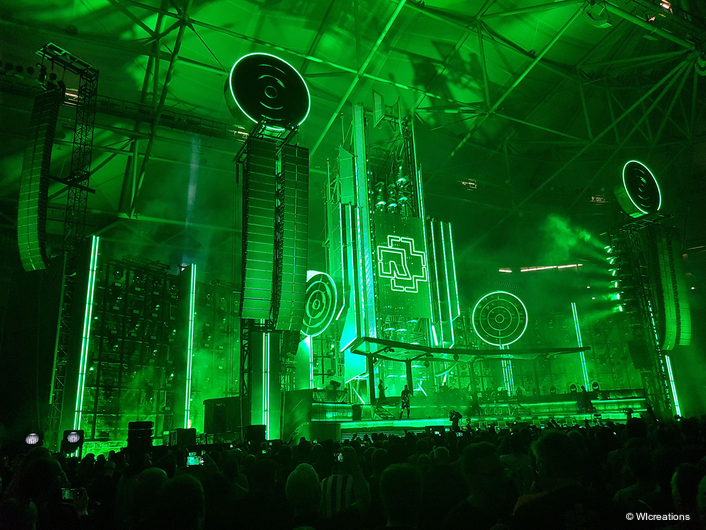 The MCA user interface is complemented with a WI-ES-Commander unit and a SIL3 group-position monitoring system providing protection against loss of the group synchronisation. The ES-Commander also acts as Emergency Stop and a Hold-to-run hub for all devices; it monitors each group’s SIL3 upper and lower data-limits for all dual-encoder WI-hoists and it safely halts the movement in case of positional discrepancies.

This innovative safety system concept allows hassle-free plug-and-play configuration of daisy-chained drives and a variety of safety signal distribution modules for the most flexible setups.

Contrary to the original plan of doing a full test build at StageCo in Belgium, time constraints forced the team to skip that step, so the first full assembly of all these WI elements was pushed back to the Black Box Music rehearsal venue in Berlin.

This was soon followed by the first show – a storming success - at the Veltins Arena in Gelsenkirchen at the end of May.

Says Hans Willems, MD of WIcreations “Delivering this SIL3 machine in time wasn’t actually too difficult, because our NEW WImotion system was already ready! Everything aligned for this to be the perfect time to launch it!”

On the Road with Rammstein

A total of 72 tons and 10 trailers full of custom equipment was delivered from WI in just 14 weeks – a great testament to the overall collaboration of the many departments involved in creating this amazing show, and to the teamwork and ingenuity of the WI crew in Heist-op-den-Berg. 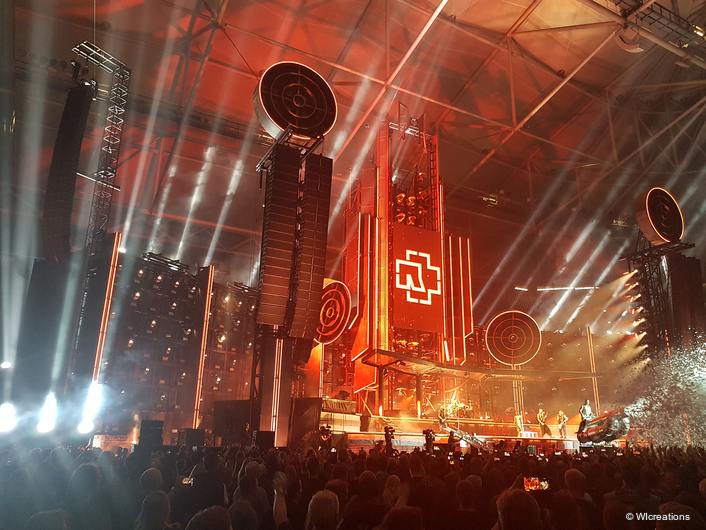 The WI moving video and band platform systems are being managed on the road by two dedicated WI crew, while the scenic equipment is being managed by the production crews.

Two sets of black steel are being provided by StageCo Belgium.

The new Rammstein album has been a decade in the making, and the campaign to promote this new opus of raw confrontation sees Rammstein back on the road for the first time in six years - with a BANG - to mark the occasion and satisfy their many, many fans and anyone fascinated with the art of hardcore metal theatre.