Mylène Farmer is one of the most successful French recording artists of all time. She has sold over 30 million records worldwide and had 13 number one hits in the French charts eight of them consecutive, as well as working as a model and actress during a prolific and successful career.

Wicreations, renowned for their innovative work in the entertainment industry, were approached by the tour’s Production Manager Didier Gaume and Technical Director Pascal “George” Meley, who have worked with them before on a number of projects, and asked if they could provide a number of solutions to help stage this spectacular show.

Timeless’s impressive stage architecture – nearly all of which moved - was designed by the late Mark Fisher and needed many custom elements.

The show opened with Farmer appearing from within a ‘Particle Generator’ after a lengthy video intro which ramped up the excitement and tension to breaking point; the upstage LED video screen was hung on a Wicreations WI Tracking system which enabled it to be separated into six sections, all of which independently moved; a rotating telescopic ‘spoon bridge’ was integrated into the stage floor; a massive custom lighting truss circle was flown above the downstage area, and inside that was a second smaller circular truss also on motion control hoists … and finally, the fifth moving effect was 11 lighting pods.

All the flown pieces were controlled by a hot-rodded Kinesys Vector control system operated by the Wicreations operator, running 57 motor channels and a total of 68 different motion cues.

This massive undertaking was project managed for Wicreations by Koen Peeters who comments, “Working on the tour was a great challenge and an opportunity for us to use our imagination and expertise not just to find really creative custom solutions for the ambitious production design … but ones that were practical to tour”. 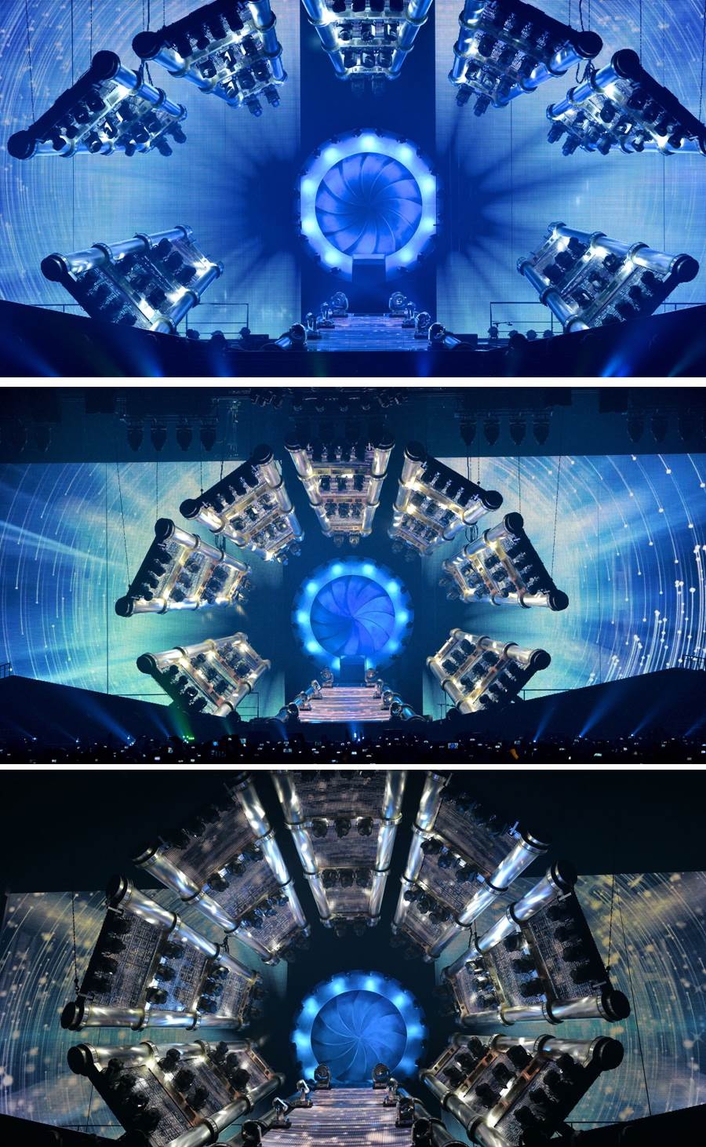 The Particle Generator
This eye-catching effect came at the start of a show action-packed with visual moments and WOW factors. It was formed of five trapezoidal shaped video frames flown and tracked on two Wicreations WI Tracks and 15 zero-speed chain hoists. These 5 panels had to align with three more panels that rose up from the ground.

This shape had to be formed at a specific moment in the show for Farmer’s entrance onto stage, and the five flown panels then had to be able to move into several other configurations above the stage.

Crucial to the design was the millimeter accurate defining of the positional pick up points relating to the five frames, and this took numerous test runs at the Wicreations workshop, followed by an extensive test period in Lyon, before determining the perfect positions to create the effect.

During the show, the panels tracked from a flattened horizontal position into the centralized ‘accelerator position’, curving around to form the arc of the set piece with literally a few centimetres of air between them … and from there, they moved into a third ‘straightened out’ vertical position.

Spoon Bridge
This was another stunning ‘gag’ that enthralled crowds flocking to see Farmer’s sold out tour across five countries.

The Spoon Bridge remained hidden from the audience until the song “Bleu Noir” started, about an hour into the show, where it started with a handrail rising from the floor while Farmer stepped into the platform. The full telescopic mast then emerged from the stage floor and extended right out over the audience,  panning from left to right and back again above the delighted crowds. 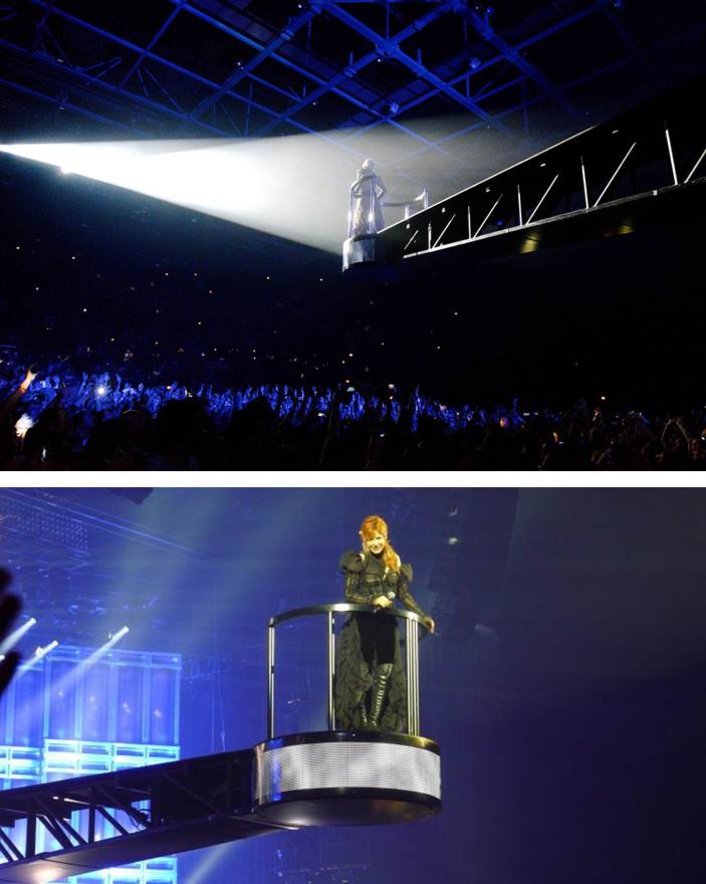 The bridge measured 11.5 metres in length and was constructed from standard aluminium tower sections, extended by a custom fabricated tapered section with its telescopic and rotating mast secreted below the stage. The central base unit was extremely compact, fitting in a 2m x 2m scaffolding bay, and the complete spoon structure weighed 5.7 tonnes in total.

Its movement was run via an inbuilt set of hydraulics, linked to the Wicreations controlling computer for super-smooth and accurate movement.

The platform at the end - finished with LED panels - was rated to carry loads of up to 110Kgs (artist plus equipment) with the tip reaching a rotational speed of one metre a second.

A completely bespoke product developed by Wicreations for this tour, their concept drawings and designs convinced the client that this was the best solution for how they wanted to play out part of the show.

The Spoon Bridge was designed and robustly built by Wicreations to be practical to tour and straightforward to rig each day, breaking down into modular sections for easy transportation and maximizing time during load ins and outs.

Lighting Circles
The 4 metre diameter ‘Lighting Circle’ was also designed for fast rigging and de-rigging, and so all 36 MAC Aura LED wash moving lights travelled within it for convenience. To make this happen Wicreations also designed a special ‘landing dolly’ into which the circle was flown from the roof during the get out.

Once landed on the dolly, four catches were released, and using its four motion control hoists, the trussing superstructure hinged downwards on both sides of the dolly folding into the travelling position. From there the whole thing could be wheeled on to the truck.

It was positioned and picked up each day using the reverse procedure.

A smaller 3m trussing circle was rigged within it containing smoke machines, and this was hung on three Wicreations motion hoists.

Lighting Pods
To build the 11 pods that were central to Lighting Designer Dimiti Vassiliu aesthetics for the show, Wicreations started with standard pre-rig trusses and designed custom brackets to accommodate either one or two hoists, their controllers and all the necessary diverters, etc. within the truss section.

This streamlined the pods for quick and easy set up and rigging each day. The 6 offstage pre-rig truss sections were equipped with a twin chain hoist (2x 250kg capacity) to ensure that the pods always stayed fully horizontal.

Lightweight aluminum dollies were used to transport the pods and these could either stay attached to the PRT sections or be folded together and stacked away during the show.

Tracking LED screen
A 19.2 x 8.64m large LED screen upstage formed the backdrop to the show and this was hung on a 30 metre WI Tracking system so it could be divided into six columns.

Newly integrated pick up units were utilized to bring the video screen as close as possible to the tracking truss – maximizing rigging height.

WI Stack Truss is a product that has been developed to integrate the WI Track extremely expediently without losing any space. Its versatile onboard connecting system means it can be used for either straight or curved tracking beams, which makes it the best and fastest tracking system available on the market for touring purposes.

The resulting load in and load out times speak for themselves … with the load in of the full set (25 production trucks) realized in only 12 hours, while the load out could be achieved in 3.5 hours!