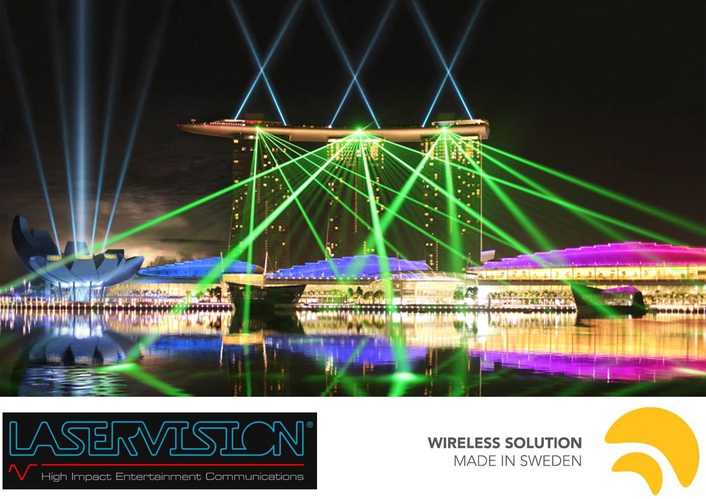 W-DMX™ was used for a majority of a total of half a million watts of light including 30 high powered multi-coloured moving searchlights located on the waterfront Event Plaza, Skypark and ArtScience museum oculus; one billion foot candles of light arising from the Oculus of the ArtScience Museum into the heavens; 15 high powered Stella ~ Ray and Light ~ Ray Laser Systems producing over 300,000 milliwatts of laser energy, capable of being seen for up to 55 kilometres outdoors; over 250,000 energy efficient intelligent LEDs; and 9 high powered High Definition Video Projectors enclosed within customised floating barges.

In addition to the innovative technologies employed, Laservision gave special attention to Green initiatives including the use of W-DMX, which reduces the carbon footprint by eliminating the need for excess cable.

In addition to the use of W-DMX, Laservision incorporated extremely energy efficient lighting technologies into the design such as intelligent LEDs, Laservision’s water screen systems use a patented air-to-water mix ratio that aerates the surrounding body of water, and the restraint of use of excess pyrotechnics. As this attraction is located on Marina Bay, which is a drinking reservoir, the nightly spectacular is free of any falling debris from pyrotechnics that could comprise the quality of the water. On special occasions that call for extra celebration such and Chinese New Year and National Day, zero fallout pyrotechnic technologies will be used to minimise the environmental impact whilst still maintaining a premium effect.

The show was so highly acclaimed that Laservision was honoured for creating the ‘Best New Tourist Attraction’ in South East Asia during the Opening Ceremony for the 2012 Association of Southeast Asian Nations (ASEAN) Tourism Forum in Manado Indonesia. Wonder Full was selected for its creativity in design, functionality, harmony with the environment and the overall quality experienced by audiences. This Award recognises Laservision’s continual contribution in delivering new and innovative solutions to the tourism industry stimulating economic development within the region. The attraction has quickly become the Number One Night Time Attraction in Singapore.

In accepting the award, Laservision’s Shannon Brooks (Director of Projects and Marketing) stated “Laservision has a long and enviable track record of producing number one night time Tourist Attractions around the globe. The recognition by ASEANTA of this success brings credibility to companies like Laservision who are at the forefront of the Entertainment, Attractions and Tourism Industry.”

With offices in Singapore, Hong Kong and Sydney , Laservision are currently engaged on projects in Australia, Hong Kong, India, Saudi Arabia, Macau, The United Kingdom, Singapore and Russia. Laservision looks forward to expanding its scope of multimedia attractions throughout 2012 whilst continuing to entertain millions of spectators around the world every night with their unique technologies and Innovation.