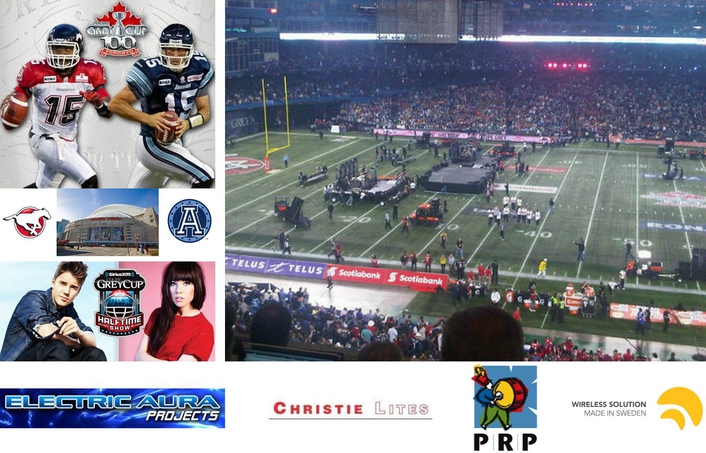 The Canadian Football League celebrated the 100th championship with the Toronto Argonauts and Calgary Stampeders at Rogers Centre in Toronto. The game, along with the SiriusXM Grey Cup Halftime Show was seen by a live audience of 50,000 and broadcast via TV and the Internet to millions in Canada, the U.S. and beyond, making the event the most-watched Grey Cup and halftime show in CFL history.

Vancouver-based production company Electric Aura was responsible for the design of the show. Production designer Robert Sondergaard and lighting director Jason McKinnon teamed up with producer Patrick Roberge of Patrick Roberge Productions and rental company Christie Lites to produce this event. This same group has collaborated on four Grey Cup shows along with other mega TV spectacles including Olympics ceremonies.

The halftime show featured music legend Gordon Lightfoot, rock band Marianas Trench, pop star Carly Rae Jepsen, and finally Canada’s own Justin Bieber. The performances took place on three stages designed like boxcars placed center field. Electric Aura had only 30 minutes to coordinate the whole show, with a mere seven and a half minutes to prepare for the show and only 3 minutes to clear the field at the end. 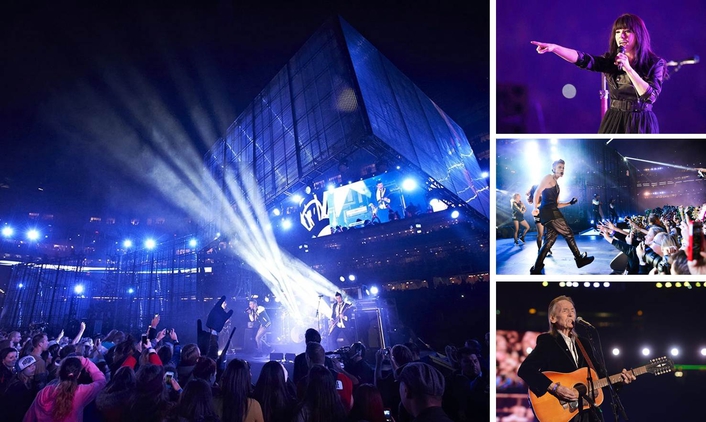 Lighting came from all corners of the field and stadium, with 200 MAC 101s & MAC Auras strategically placed in the seats, with the wireless DMX signal from W-DMX, supplied by Electric Aura. They had used W-DMX on the Grey Cup last year, as well as on several other high-profile events, so they were confident with its reliability. The MACs were mounted on levels 200 and 500 and had spare transceivers in both the send and receive locations so they could quickly swap one out. Lighting control came from grandMA consoles.

The placement of the fixtures would have made it a challenge to get a hard data line through the seats. The team used a variety of antenna with the W-DMX, allowing them to get the data up to the farthest corners without any problems. Lighting Director Jason McKinnon explains, “There were 5 ports of transceivers and the longest one was 400' (120 metres).  We used the new 9db vertically polarized antennas for the three closest ones (about 100 feet / 30 metres) and the parabolic dish antennas for the long two.”

He continues, “Relying on a wireless signal to control such a large part of our show made me a little nervous. The venue is such a high wireless signal environment on game day with so many different people using wireless devices, not to mention the general public. My nervousness was unfounded as once again, the W-DMX performed flawlessly.”

Wireless Solution Sweden is the world’s leading manufacturer of Wireless lighting control equipment, now celebrating 100,000 units sold worldwide and over 40 OEM partners. Hailed for its reliability and ease of use, Wireless Solution’s W-DMX range of products is the consistent choice for top professionals in the lighting industry and specified with perfect results in high-profile events and installations around the world. W-DMX is also hailed as the best wireless OEM solution. W-DMX has been used in major lighting applications including the Marina Bay Sands in Singapore, Bruce Springsteen, Lady Gaga, Coldplay, Superbowl XLVI and many more.