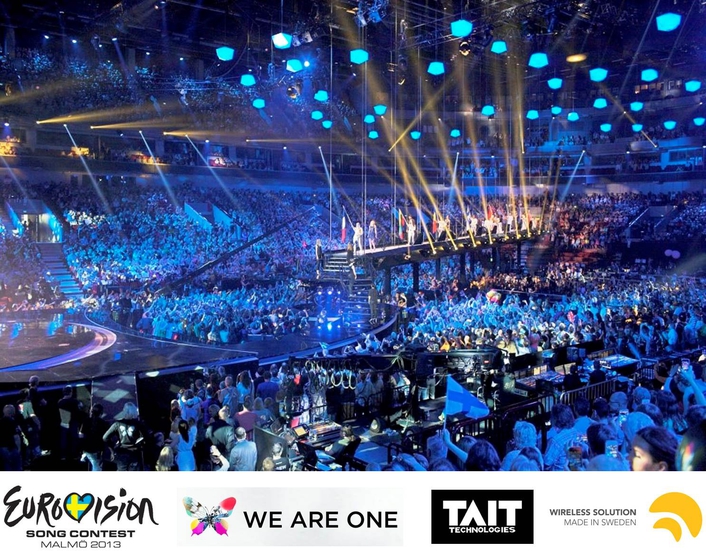 A sea of kinetic sculptures were hung throughout the entire arena roof, resembling interior design lamps which would raise, lower and change color for the different performances. The sculptures were hung from custom winches designed by Tait Technologies with the majority hung over the audience and 14 placed directly over the main stage. 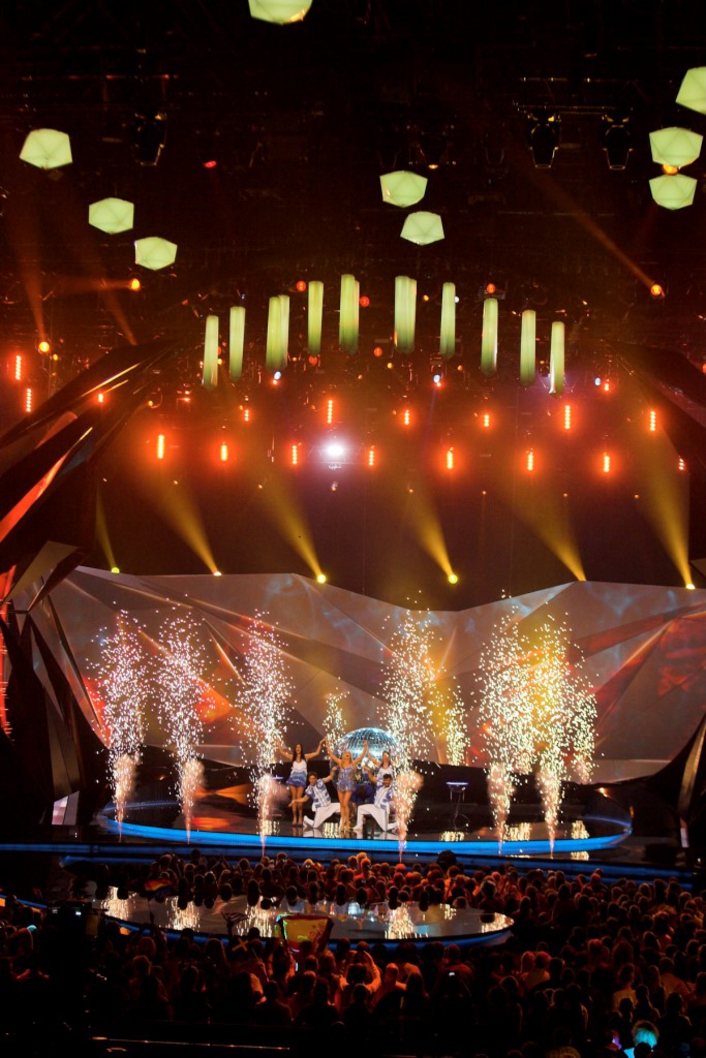 2 W-DMX BlackBox F-1 MKII units controlled 70 W-DMX Micro OEM Transceivers (with support of RDM), utilizing three channels for an RGB LED located inside the fixtures and two channels for their speed and position. Although independently controllable, the sculptures as a whole were designed in unity, creating wave effects or lowering at the same time to give an intimate feel to the arena. Control came via grandMA Light consoles. The W-DMX units come with the latest G4S software with Advance Adaptive Technology, making it ideal for a crowded wireless traffic spectrum.

Lighting Designer Fredrik Jönsson, said: “W-DMX was really the only way to pull off this effect. The signal was solid and reliable and set up was clean and fast - something very important on a show this size.”

Technical Director Ola Melzig agreed, saying, “Inside the arena, we had twice the amount of wireless traffic per cubic meter as Times Square in New York and the W-DMX worked flawlessly. It’s truly plug and play – hands down amazing. Both a cost effective and easy solution.” 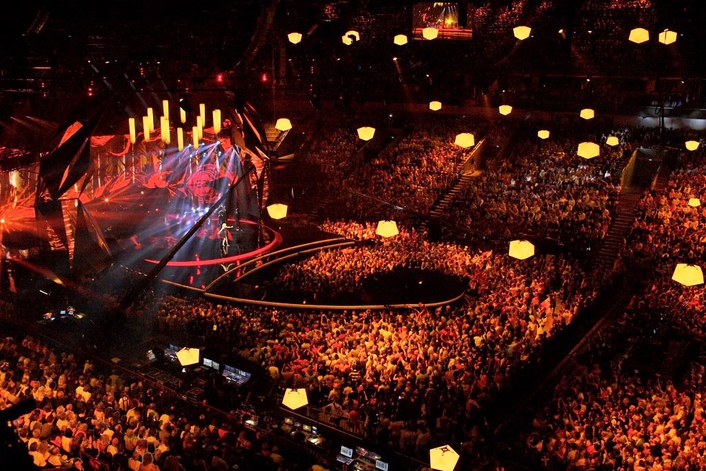 Tait Technologies Assistant Project Manager Brandon Bogaert added, “The installation of the W-DMX was extremely easy and fast, making that task painless, which was very important when every minute counts.”

In addition to the kinetic sculptures, 50 Clay Paky Glow Up Strips located in the main lighting rig behind the stage were operated via OEM installed W-DMX, giving added flair to the main stage looks.

Eurovision 2013 consisted of three live broadcasts – Semi-finals 1 and 2 on May 14th and 16th and the Finals on May 18th. The show is an annual competition held among active member countries of the European Broadcasting Union (EBU). Each member country submits a song to be performed on live television and then casts votes for the other countries' songs to determine the most popular song in the competition. The Contest has been broadcast every year since its inauguration in 1956 and is one of the longest-running television programs in the world. The production is well known for its technical achievements and its equipment demands are high. 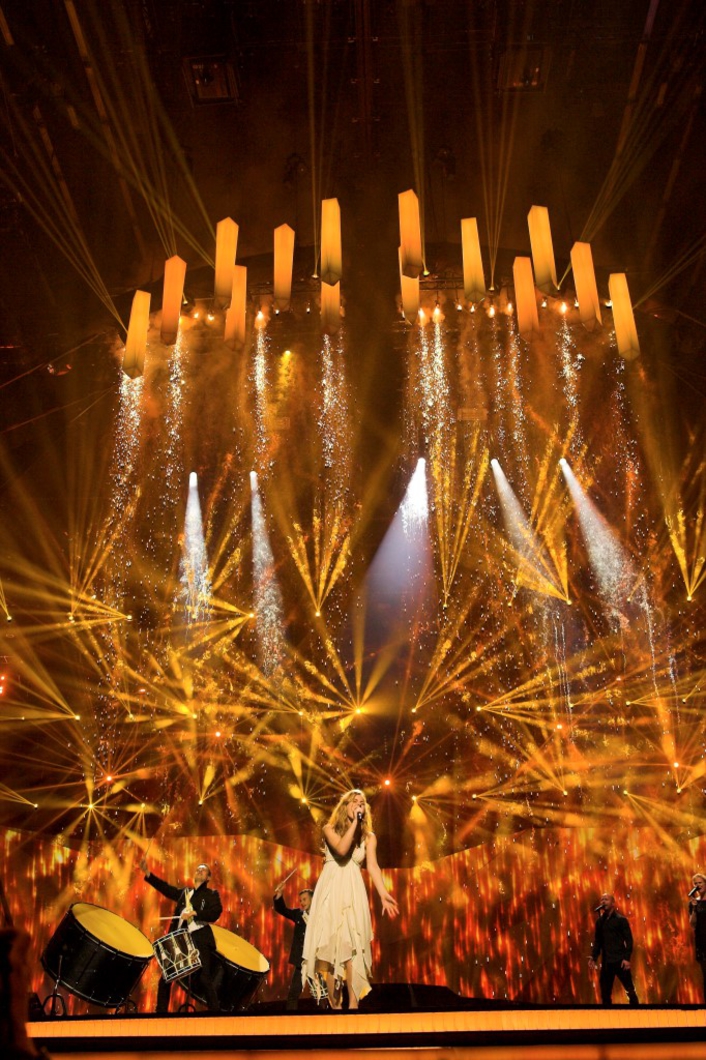 The 2013 show broke all previous television viewer records with over 170 million viewers worldwide, not counting internet views. In a show of this scale, nothing is left to chance.

Final results of the competition put Denmark as 2013 champion with the song “Only Teardrops” by Emmelie de Forest, putting the show in Denmark next year for the first time since 2001.

Wireless Solution Sweden is the world’s leading manufacturer of Wireless lighting control equipment, now celebrating 225,000 units sold worldwide and over 45 OEM partners. Hailed for its reliability and ease of use, Wireless Solution’s W-DMX range of products is the consistent choice for top professionals in the lighting industry and specified with perfect results in high-profile events and installations around the world. W-DMX is also hailed as the best wireless OEM solution. W-DMX has been used in major lighting applications including the Beyoncé world tour, Justin Bieber, Idol, Bruce Springsteen, Lady Gaga, Coldplay, the Marina Bay Sands in Singapore, Super Bowl XLVI, Olympic Games and many more.

Tait Technologies is the European sister company of Tait Towers and Fisher Technical Services. The group has over three hundred employees and has six offices worldwide. Tait are a leading provider of video and scenic technologies providing solutions to the live event, architectural, corporate, film, theatre, fixed installation markets. Tait balances a unique blend of pioneering technologies while maintaining the highest level of quality craftsmanship.