Volkslicht and Spot Ones Shine at Wakarusa 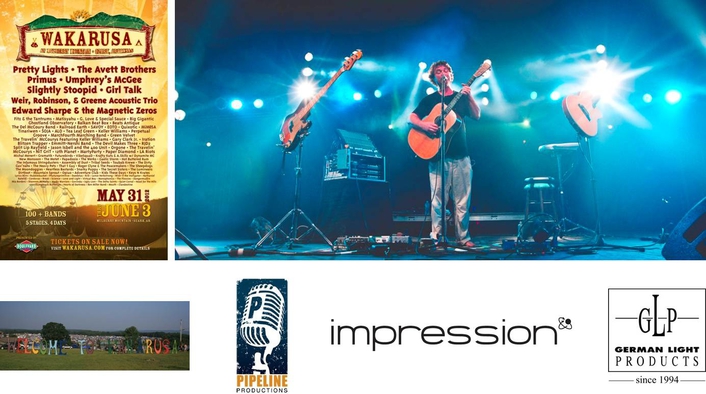 Keller Williams, performing under the GLP impressions at Wakarusa
For the fifth consecutive year, synaesthesiax LD JC Campbell played an active role in the four-day Wakarusa Music and Arts Festival in the Ozarks of Northern Arkansas.

However, this was his first year with responsibility for lighting a complete stage; working for suppliers Midnight Lighting, he produced the lighting plot for the Outpost tent, using large quantities of fast moving GLP LED heads to create the wow factor among the more conventional luminaires.

Promoted by Pipeline Productions, and held in the picturesque Mulberry Mountain, the festival featured five stages in all — including Outpost, a medium-sized tent with a self-climbing grid.

Suspended from the raked overhead trusses, JC Campbell used eight Spot One and 12 Volklicht Zooms; four of the Spot Ones were evenly spaced on each section of US truss, while the Volkslicht Zooms were set in pods of three on the ends of both DS trusses.

As with all festivals, the lighting dynamic needs to maintain its impact in daylight conditions, through dusk and into night — but working in a tent all weekend the LD was fortunate in having to deal only with bounce instead of direct sunlight.

“We ran lights for every act starting at 1pm,” he stated. “During the day, the Spot Ones still yielded a sharp beam in the haze and had enough output to overcome any daylight bounce, while still providing color on the roof of the tent. But one of the greatest daytime benefits was being able to reduce the temperature on stage by not using the par cans — since the Volkslichts provided an excellent wash.”

He also noted that the Volklicht Zooms yielded “a beautiful amber and a stunning white”, while the reds of the Spot Ones were “unbelievable”.

In fact the generous color palettes of the GLP FX enabled him to provide sympathetic lighting for the whole genre of acts — from Bluegrass (Del McCoury) right through to Dubstep (Mimosa), while other notable acts appearing on the stage included EOTO, Keller Williams, Balkan Beat Box, Papadosio and Paper Diamond.

He highlighted EOTO as being one of the performances where the Spot Ones really tied the room together. “I ran this as a minimalist show, as there was a large, video-mapped lotus flower onstage with some incredible custom content rolling.  The accuracy of the Spot Ones allowed me to accent a video heavy production with beams and images without washing out the visual on the 14ft x 24ft set piece.”

It was JC himself who had originally introduced Midnight Lighting to GLP’s technology and started using their fixtures on tour four years ago.

“I am continually pleased with the performance of our GLP gear,” he says. “The versatility of the Volkslicht Zooms is amazing — they provide a smooth even wash for the bands and turn around and provide high speed aerials for the DJs.

“I had multiple touring LDs and PMs who had nothing but good things to say about the Spot Ones. Their images are sharp and even, their feature set is complete and efficient, their colors are rich and bright, their movement is fast and smooth — and this is before you consider the maintenance cycle being virtually non-existent and how little power they draw.”

At Wakarusa JC Campbell was assisted by a crew that included Tony Martucci and Cameron Beasley as Tech/LDs and Samantha Hamilton as Production Assistant. Summarising the impact of the festival rig, he stated, “It really exceeded my expectations with its versatility to light a proper performance space day and night — in the middle of a field at the top of the Ozark Mountains.”

GLP Spot One Again Sets a New Benchmark
Lawrence Upton Has a Smas...LP's New Volkslicht Zooms
Impression Wash One Has The X-Factor