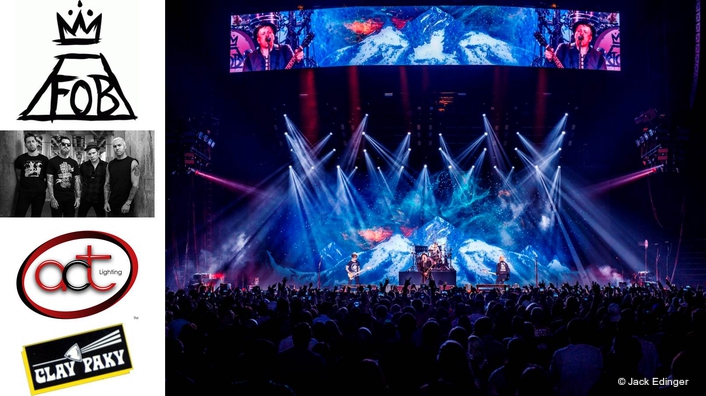 Fall Out Boy just wrapped “The Boys of Zummer Tour” (sic) co-headlining with Wiz Khalifa, and once again Clay Paky fixtures were along for the exciting cross-country ride.  A.C.T Lighting, Inc. is the exclusive distributor of Clay Paky products in North America.

Robb Jibson of So Midwest, Inc. continued his relationship with the pop punk band, this time as production designer for the US amphitheater tour. Fall Out Boy released its sixth studio album, “American Beauty/American Psycho,” this year; it swiftly became the band’s third #1 album.

An enthusiastic proponent of Clay Paky fixtures, Jibson specified 68 Mythos for the tour.  Upstaging was the lighting vendor.

“I’m a fan of Clay Paky; they seem to really do things right,” he declares.  “I had demo’d Mythos but hadn’t had a chance to use them just yet.  The light is versatile enough I knew if we spec’d them we wouldn’t need much else – no typical systems of wash, hard edge or effects systems.  I put all my chips on Mythos as our only hard-edged fixture in the show!  And they were as awesome!”

It was Jibson’s goal to design a well-balanced show where the “lighting and video played well together.”  He wanted to present the video content in an innovative way and eliminate side IMAG screens, which Fall Out Boy dislikes.  The band also wants to enter the stage without being seen, and Jibson was challenged to create a fun reveal. 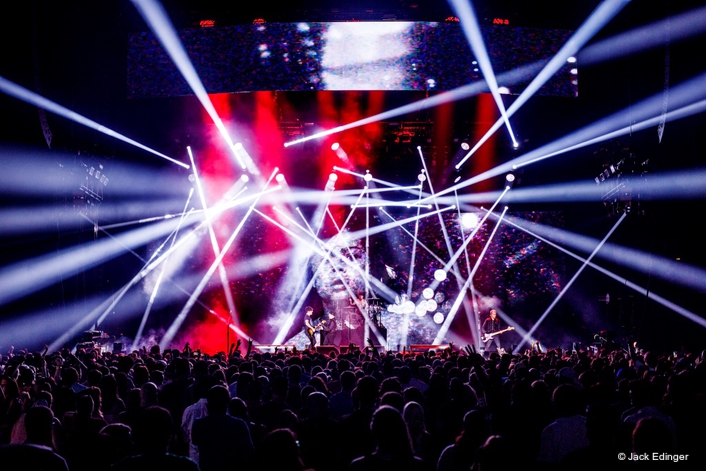 “I came up with a guillotine, an LED wall on winches that was 60 feet wide and 12 feet tall,” he explains.  “It acted like a grand drape would work in a theater and moved up and down to reveal every act.  After a short intro sequence Fall Out Boy appeared in a blast of smoke the screen flew up!”

Since Mythos fixtures are still so new to the market most of the lighting teams he met at the venues did not have firsthand experience with their versatile capabilities. And using them as followspots? Crazy!

“The first time George Masek had showed me the prototype Super Sharpy I knew that I had found the next iteration of the automated key light, which we had done with sharpies for smaller gigs. So it was just a natural for the Mythos! I had to fight to use them as follow spots, to rope our fixtures into the spot locations,” says Jibson.  “I shoved the house spots out of the way so I could clamp Mythos to the hand rail, set them on road cases or put them on stands; two more were flown from the side trusses to cover the drummer position.  Upstaging modified the fixtures to add metal handles on front.”

“People at the venues were pretty nervous about how a 470-watt fixture could replace a house spotlight.  My Response ‘watch.’  Venue by venue we won them over.  We routinely did 120-, 150-, 180-foot throws for key lighting and gobo patterns using a combination of the zoom optics and aperture gobos.  Even at the farthest point – 200 feet away from the stage – we delivered never less than 150 foot-candles.  A traditional spot would deliver about 90, and that’s if Jimmy had changed the bulb in the last decade!” 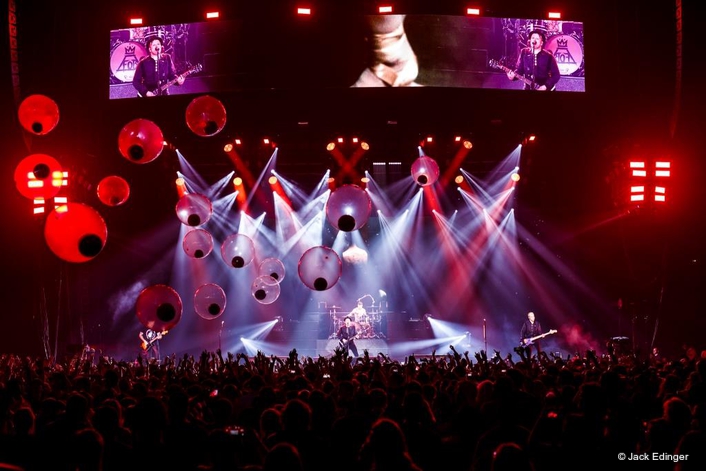 Jibson flew the remaining 60 Mythos overhead where they supplied key lighting and all the effects lighting.  “Using the frost filter is great for punchy wash looks.  They already have all the goodness that Sharpys have built in for aerial effects, and their unique color mixing system was really snappy.  The lensing system is like a prime photographic lens with infinity focus.  That made the show look really clean, and that’s what we wanted: clean lines and clean content.”

Throughout the tour, which ran from June through August, “Mythos exceeded my wildest imaginings,” Jibson reports.  “I was super-happy with their reliability, footprint and output.  I love ‘em!”

George Masek, A.C.T Vice President – Automated Lighting, concludes, “It is such a pleasure working with Robb.  You can never be sure what he is going to come up with, and that is the beauty and genius of his work.  He pushes the Clay Paky fixtures to their limits and gets results that are exceptional.” 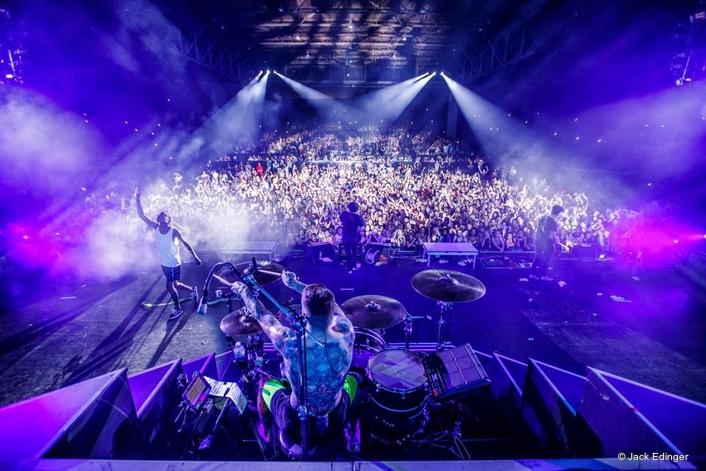 Francesco Romagnoli, Clay Paky Area Manager for North and Latin America, added, “Mr. Jibson is a very innovative lighting designer and we love to see the ways he uses our fixtures.  We look forward to seeing his work for many projects to come.”