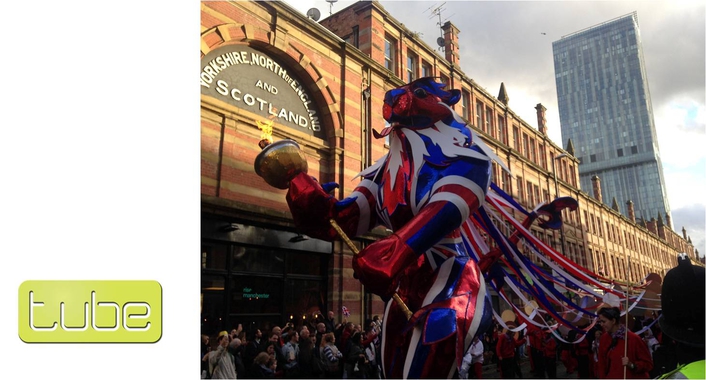 tube uksupplied a fantastic sounding multi-site PA system around Manchester City centre to welcome home Team GB’s 2016 Olympic and Paralympic stars and celebrate their stunning array of record breaking performances at Rio 2016!
The event was broadcast live on UK TV networks BBC 1 and Channel 4.
This involved the deployment of 78 x main d&b loudspeakers and 32 sub cabinets at the main stage location in Albert Square, plus another 35 speakers and 21 x subs which provided local sound systems for five relay LED screen positions at key strategic points along the Parade route.

Working for organisers Manchester City Council, the tube team of 19 noize boyz and girlz was led by Melvyn Coote and worked solidly in shifts for 36 hours before the event to ensure that everything was set up and sounded great, then de-rigged quickly, efficiently and effectively in order to minimise disruption to the public.
Says Melvyn, “We were all intensely proud to be involved in this event and to help honour our Olympic heroes. The logistics, prep and planning were mind-boggling at times, the timeframe for such a massive and high profile event was exceptionally tight due to it being in some very public spaces at peak time!  Everyone worked very hard and some long hours … but the teamwork and camaraderie were amazing”.

Albert Square
A 60 metre wide by 8 metre deep stage was installed for the main ceremony - to accommodate all the Olympic Heroes in their teams. Crowds were warmed up by the Brythoniaid Welsh Male Voice Choir and later entertained by rousing performances from rockers the Kaiser Chiefs and singer Rebecca Ferguson, who closed the show with a stirring rendition of David Bowie’s epic “Heroes”.
The PA had to cover around 10,000 people in the main Square area plus all those gathering nearer the back and to the sides.

A major challenge was minimising the bleed into the mics to ensure the best possible quality audio for the broadcasts.
The main system comprised four flown loudspeaker arrays each of 6 x d&b V8s, hung behind the stage to maintain clear visual lines for the long camera shots and zoom-ins, and on top of 10 metre high PA masts that were integrated with the stage structure.
They were focused to only just start hitting the audience area on front of stage, to ensure that as little PA noise was slipping onto the stage mics. A neat row of d&b E6 speakers positioned along the stage lip provided in-fill for the very front rows of fans.

The Square area runs about 55 metres to the back, but when considering coverage for the space out to the corners, calculations needs to extend 65 – 80 metres.
There were also some broadcast structures erected in the middle of the space – one for the BBC, one for Channel 4 plus a VIP viewing gallery and assorted press platforms - which effectively divided the Square into front and rear viewing areas.
Delays were needed to get audio to those standing behind the mass of structures, with eight positions mostly utilising d&b Y8s, Y12s and Y-SUBS plus a few smaller spot positions with Q7s, Q-SUBS and B2s.

Main stage bottom was generated by a serious amount of B2s and V-SUBS and everything was powered by 23 x D12 and 4 x D80 amps.
A Yamaha CL5 console provided the control, run in conjunction with a Yamaha Rio2334 at FOH and two onstage to give sufficient outputs to route everything needed out to the PA, broadcast studios, press, IEMs, etc. with around 55 outputs in total.
Two Mac Mini servers running in parallel were utilized for the playback music sources.
Main stage monitors for music artists were provided with d&b M4 wedges and a total of 8 channels of IEMs for artists and presenter talkback systems.

The huge 60m stage-width hosting the medallists needed to also have clearly audible sound and this was achieved discretely with more d&b E6 fills in the pit firing back over the stage so all the Heroes could hear the proceedings clearly. Finally, two large induction loops were added to assist with hearing aid devices.
Twelve Sennheiser SKM5200 hand-held radio mics were supplied with a combination of condenser heads for the presenters and MD5235 heads for the artists … all running into an XTA DS800 line distribution system for integration into the BBC’s broadcasting systems. There were over 40 ways of line splits in total.

Live Relay Screen Positions
The five relay screens were in four different key locations along the Parade route – with one pair running back-to-back.
The sound systems were all made up with d&b V8s, V12s and V-SUBs driven by 19 x D12s.
Two large screen systems in Cathedral Gardens and Exchange Square were relatively straightforward, all set up in one hit on the day, with tube crew building two self-supporting left and right ground stacks of PA either side of the screen.
Speed of fit-up/tear-down was the issue in both locations, so for speed and convenience the arrays were self-supported by their own subs.

Two tricky screen locations were on Deansgate near to Spinningfields, and at the junction of Cross Street and South King Street. tube’s design incorporated one stack of PA per screen on these sites and again, they had to be mega quick to install and de-rig as Deansgate and Cross Street are main central Manchester arteries that had to be re-opened ASAP after the event finished.

They could not start these builds until after midday on the Monday afternoon (the event kicked off around 16.00) – so tube’s techs were in place in two vans at 11.45 and leapt into action, built, secured and wired the stacks – also self-supporting. They then stored the vans, did the show, and as soon as it was wrapped, the PAs were down and packed in the van in an impressive 7-8 minutes. That whole site was clear in 15 – 20 minutes so that Deansgate and Cross Street could be opened to traffic again.

Adding to the logistics of the project were several other public events taking place in and around the same areas – also with sound provided by tube – in the days immediately before … including the Royal visit by the Duke and Duchess of Cambridge (Prince William and Kate Middleton) on the Friday and the massive Manchester Diwali celebrations in Albert Square on the Saturday!

Also
In addition to Albert Square and the five relay screen areas … tube uk supplied a sound system for the last float in the Heroes Parade itself – designed and built by arts specialists Walk The Plank, the tube team installed four d&b Y7P speakers and 4 x Q-SUBS powered by 2 x D12s all running off a 5 kVA generator which was also part of the package.
This cranked up nicely and helped create a proper renegade carnival atmosphere at the rear of the procession which drew wildly enthusiastic crowds estimated at between 150,000 and 200,000 into Manchester  …  transforming a wet October afternoon into a sea of colour and positive energy in recognition of our amazing Olympian achievers.