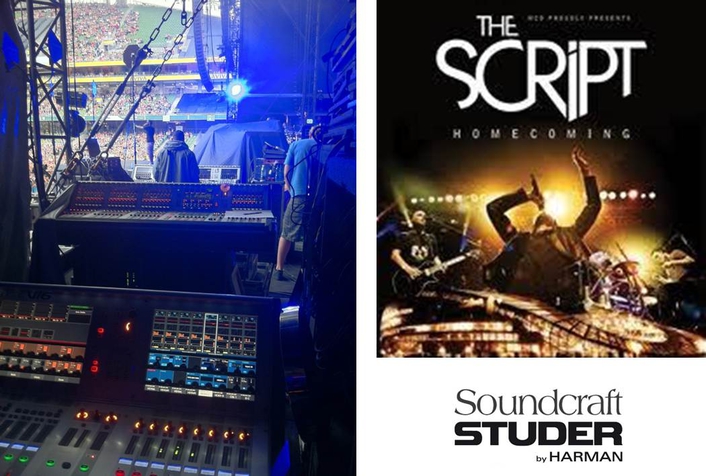 The Vi6 is an ideal desk for monitors, not only because of its superior sound quality but also its reduced footprint
It’s unusual enough to find a couple of identical digital consoles congregated in the crowded confines of monitor world, let alone a trio. But that’s precisely what happened when The Script played their sell-out homecoming gig at Dublin’s Aviva Stadium recently—their first stadium headline concert—when three Soundcraft Vi6 digital consoles could be seen in the stage wings, where they were sequentially pressed into monitor duties.

PA providers to the Irish trio were Adlib Audio, and crew chief Marc Peers says the Vi6 is the band’s monitor desk of choice. “The Script know precisely what they are looking for,” he notes. “Both Mark [Sheehan] and Danny [O’Donoghue] are former producers and they love the sound of the Vi6. Monitor engineer Paul Moore used all the board’s dynamics—and there was no outboard processing whatsoever.”

The Vi6 is an ideal desk for monitors, not only because of its superior sound quality but also its reduced footprint—a particular advantage on small stages where a slim profile desk is essential (and no additional outboard gear is necessary). Monitor engineers also commend the Vi6’s ergonomics, including the Vistonics II™ touchscreen system and FaderGlow™, which enable engineers to access all functions quickly and easily without the need for tedious paging.

The Aviva Stadium is no stranger to hosting equipment from the HARMAN stable; last year the formerly named Lansdowne Road Stadium underwent a complete rebuild, with large quantities of JBL PD Series loudspeakers specified for the main sound reinforcement system, and Crown amplifiers and BSS Soundweb London for the network control—as well as a Soundcraft analogue desk for match day broadcast mixing.