Trio of Soundcraft Vi Consoles For Doctor Who Live Tour 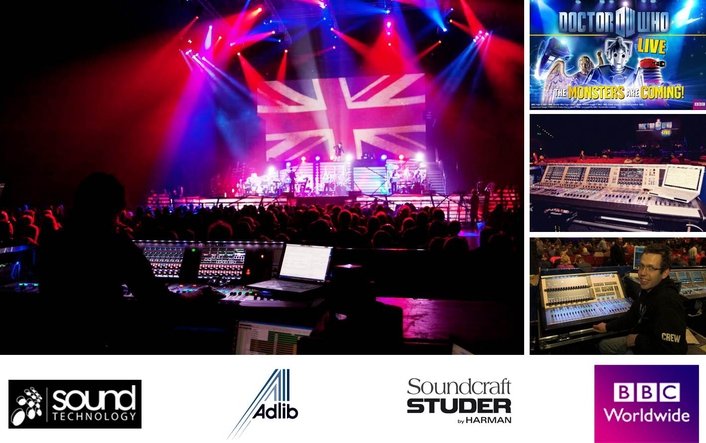 This action-packed stage version of the cult TV series stars a selection of classic and favourite Doctor Who monsters
Three Soundcraft Vi consoles--two Vi6 and a Vi1--were supplied to BBC Worldwide by ADLIB Audio for the recent Doctor Who Live tour, which visited nine major UK arenas in October and November. All desks were originally supplied by Sound Technology Ltd, Soundcraft’s UK/ROI distributors.

This action-packed stage version of the cult TV series stars a selection of classic and favourite Doctor Who monsters including The Daleks and Cybermen, with Nigel Planer as ‘intergalactic showman’ and archetypal baddie, Vorgenson.

The tour's 270-degree sound system was specified by XL Events’ Rich Rowley, who was also instrumental in choosing ADLIB to supply the kit. The sound company itself fielded a vastly experienced team, including Tony Szabo (systems engineer), Chris Leckie (FOH, on a Soundcraft Vi6), with Fergus Mount handling audio playback on a Soundcraft Vi1, and Marc Peers mixing monitors on a second Vi6.

“There was no other console family on the market that would give us the interface and the footprint of the Soundcraft Vi series,” says Rowley. “It’s about having a range of compatible consoles that talk to each other on every level--and for me this solution ticked every box.”

Chris Leckie piloted the main house mix on his favourite Vi6, taking it on a hair-raising voyage through a few centuries of time travel. “I can’t think of another console which, in tandem with the Vi6 on stage, the local racks and remote stage racks could have provided the flexibility required for this show,” he states.

The experienced sound man, who first worked with ADLIB back in 1985, had over 80 inputs into the desk, requiring complex patching, and including stems from Fergus Mount on the Vi1, who was controlling the audio playback hard drive via QLab software. This effectively ran the show, sending timecode to trigger the video play-ins. The Vi1 handled literally hundreds of sound effects and pieces of pre-recorded dialogue, receiving the majority of its inputs via ADAT interface cards.

“It was a joy to mix about 60 inputs of very dynamic music, from a wide variety of sources, and my capabilities were stretched somewhat further with the addition of playback stems, sound effects and then a dozen microphones for the show's cast. It's the first gig in 25 years that I’ve actually had to learn a script!”

Chris Leckie notes that the Vi6 now makes the layering of inputs as user-friendly as possible with the ‘user banks’ available on the most recent software release. Everything for which the FOH engineer required speedy access when in show mode was arranged on one bank of 24 faders. “This facility is going to be an absolute godsend to touring engineers walking onto mixers laid out at multi-band events with a generic ‘festival patch’, in that within a couple of minutes they can arrange just the inputs they need into their familiar sequence.”

Summing up, he says, “The two Vi6 desks on the tour, along with the optical multicore, allowed almost limitless options in terms of delivering different signals to different locations around the system – which would have been impossible in the analogue world. But as with every bit of kit I use, my priority is ease of use, and the Vi6 is the closest I've come to the intuitive, feel we old folk look for in a console.”

The Doctor Who Live Tour