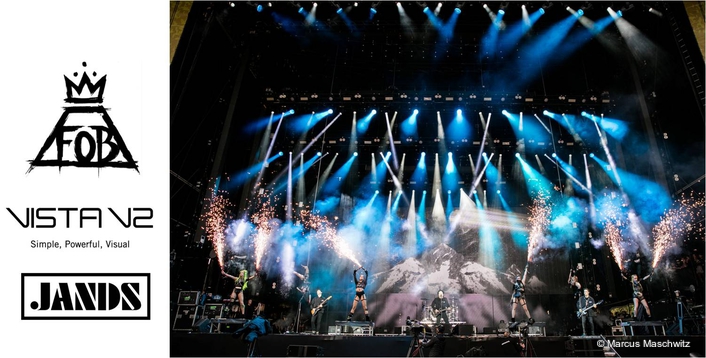 A Jands Vista console was at the heart of Fall Out Boy’s headline performances at the recent Reading and Leeds Festival main stages. The Chicago band have spent the past decade working their way up the festivals’ bill, and their strikingly visual performances on the consecutive nights, created by production designer Robb Jibson, garnered rave reviews in the media.

Robb, who also helms Chicago-based So Midwest Inc which provided the Vista control package, has been touring extensively with the band, and the Leeds and Reading shows were the culmination of the 18-month American Beauty/American Psycho album cycle. The custom setup, which has accompanied him throughout, consists of a Vista S3 control surface run on OSX via two Mac Minis with stacking dongles, providing an active/backup system with the footprint of just one desk and a total of 16 cores of i7 processing. Robb also used a pair of Jands D1 processors on the network, which helped distribute the load – a parameter count of just over 17,000. 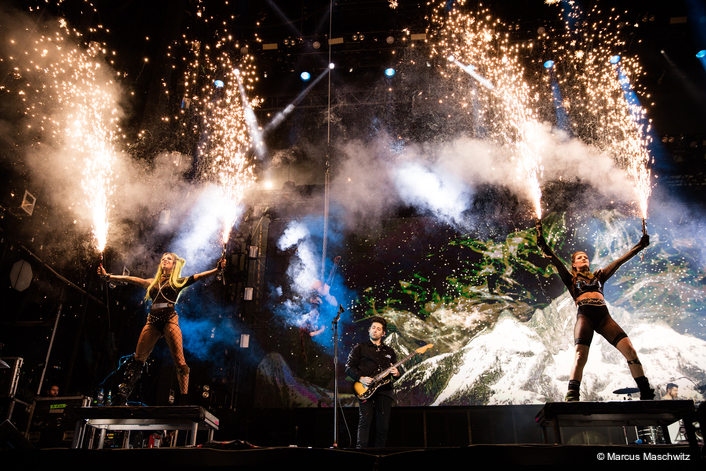 The Vista was in total control of every single visual for the shows, handling all lighting and media output. “Controlling output masters from PRG’s Mbox media server, each output surface can be cued individually and overridden for output control,” explains Robb. “This then meshes SACN with the PRG Director app to supply timecode to the video clips. 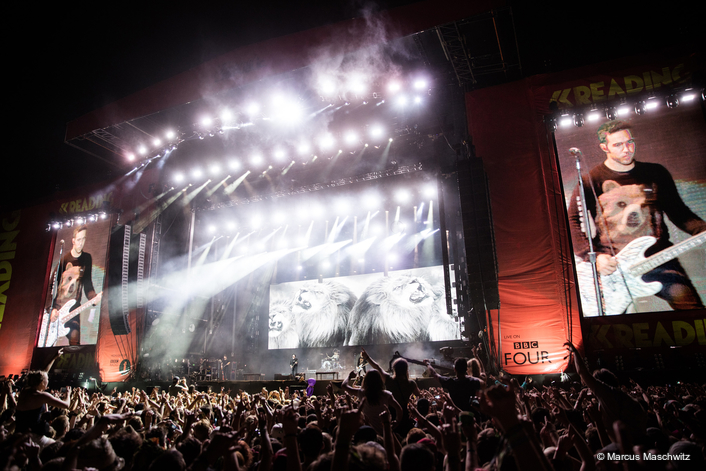 “I use Vista’s Matrix features extensively, having given a little forethought to the programming for the tour at the outset. I use these features for the majority of my movement, colour and intensity FX. Working this way, I can then simply rearrange the layout to suit the touring system to any festival show, even adding and subtracting fixtures that were never in the cues before, and keeping the elements of the cuing intact with regards to timing and size. This really speeds things along because you can add fresh fixtures and get them into the show. Combined with events and rates that actually respect real world units, you can set events to songs once and lock them in.”

As well as delivering a range of hits on the consecutive nights, the Chicago band created a new show for the festivals, based around their ‘Bloom' art project, which included a short film.

“Working in conjunction with LA-based streetwear designer Bobby Kim of The Hundreds, we developed an all-encompassing design directive, unifying stage wardrobe, scenic elements and show merchandise,” explains Robb. “This was a unique expression for Reading and Leeds, as well as for shows in Belfast, Glasgow and Del Mar (CA), and required a reimagining of a few songs and a short intro to tie it all together.”

The Jands Vista morphed the FOB tour’s existing programming across a massive lighting system supplied by London’s Neg Earth for the festival dates, mutually agreed upon to suit both the headliners and the festivals. This comprised more than 250 fixtures of Clay Paky Sharpy, Martin MAC Aura XBs and Vipers, Vari*Lite 3500 WFX, SGM Q-7 and Moles. The lighting was tied in with the show’s media content, which included live camera feeds and striking visuals designed by Robb and his creative team of animators. 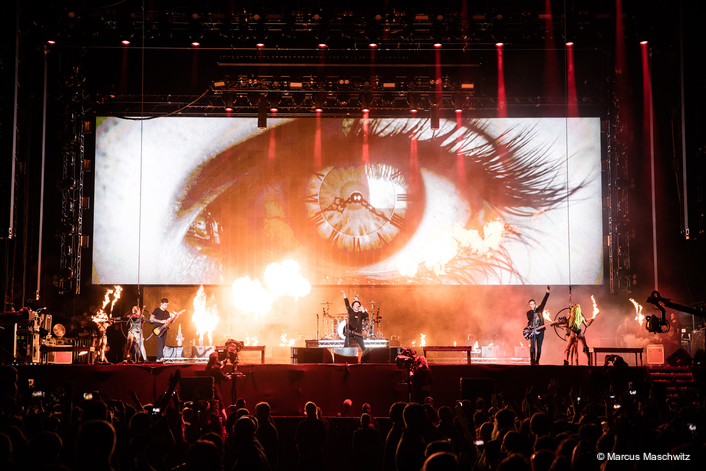 Also touring with the band was a custom-built scenic wall with one 12m x 2.6m side consisting of ROE Vanish 25mm LED panels, and the other of flower walls to match the Bloom project’s design. This extended the video raster down low behind the band, starting in a downstage position and flipping on cue to reveal the floral side, before moving upstage behind the band to mix with the show’s video canvas.

“The time line interface and unique cloning and morphing abilities of the Jands software allowed me to handle the detailed festival programming quicker than any other console type I have used,” concludes Robb. “This meant that during the limited programming slot, I could focus on getting things adjusted while others would still have been setting their broadcast outputs…”