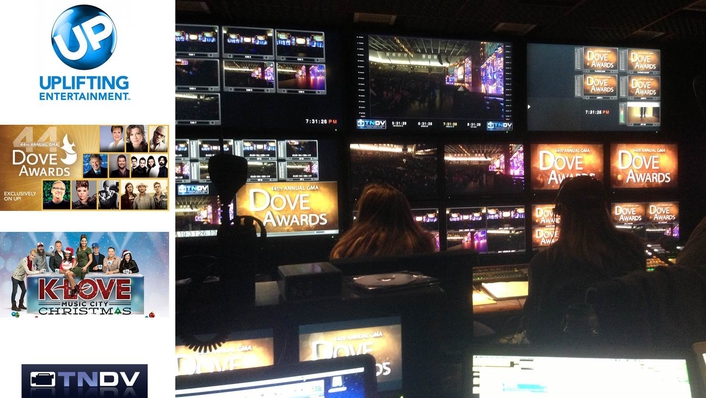 TNDV tailors video and audio strategy to meet different requirements of DOVE Awards and upcoming Christmas special
The UP Network brands itself as America’s favorite TV channel for uplifting music and family entertainment, and produces many seasonal awards and entertainment programs annually as part of that vision.  The company recently procured the mobile production services of TNDV to support two of the network’s biggest specials for 2013.

TNDV brought three of its trucks to Allen Arena in Nashville during the multi-day shoot to meet specific production needs for each show.  The TNDV team captured video and audio of musical performances, presentations and other live events for the DOVE Awards, an annual Gospel Music Association awards program airing now; and K-LOVE Music City Christmas Special, debuting December 9th and airing through the holiday season.

“TNDV takes a vested interest in being part of the team to help tie all production elements together,” said Michael Johnson, president of Encore Entertainment and executive producer of the K-LOVE Music City Christmas Special.  “They are invaluable as a problem solver, and have a unique way of seeing everything at eye level to meet specific needs of each production.”

This proved important for the UP Network’s tight production schedule, which scheduled the two shoots in sequence to include many of the popular musical acts in both shows.  This is where TNDV excelled in production strategy, assigning its largest truck, Aspiration, for the DOVE Awards; and quickly making readjustments for the Christmas special.  TNDV brought its compact Origination video truck and its dedicated audio truck, Vibration, on location for the latter. 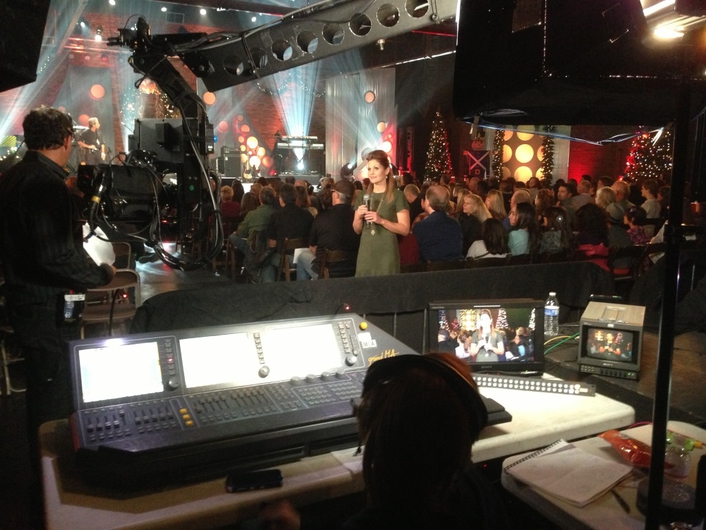 “The Christmas show was a big challenge as it was shot in one day and had very special audio needs, with many live bands, many unique instruments and quick transitions between acts,” said Johnson, who also served on the production team for the DOVE Awards.  “But the uniqueness for TNDV is that they have several trucks that are specialized for the different sized production.  They have a right fit for every project.”

TNDV built a single media infrastructure across Origination and Vibration for the Christmas special, sharing video and audio content across a centralized Harris Broadcast routing and multiviewer architecture; and providing multiple RTS intercom channels for the entire production staff.  On board Vibration, the audio team mixed and recorded performances from The David Crowder Band, TobyMac, The Newsboys and other Christian and Gospel music acts.

TNDV also turned the Vibration client lounge into a talent trailer for actress and show host Candace Cameron Bure, taking advantage of the comfortable space between the multitrack recording space and the machine room.

“Vibration’s client lounge doubles as both an audio monitoring space and a rehearsal/relaxation area for clients, and in this case Ms. Cameron Bure used it as a quiet, enclosed and climate-controlled talent trailer,” said Nic Dugger, president and owner, TNDV.  “The flat screens inside that space allowed us to provide feeds so she could watch the cameras and live cuts, and keep pace with timing.”

Dugger adds that the DOVE Awards had its share of time-related challenges, with a staging schedule that requires moving acts on and off the stage within minutes — and continuously making unique adjustments in preparation for the next shoot.

“There would often be a main stage performance followed three minutes later by a satellite stage performance at the front of house, and we had to reposition our entire production without a stop in the action,” said Dugger.  “This means having camera systems that can move quickly and with plenty of extra cable.  We worked a SteadiCam at each stage and a long jib arm to easily float between the two.  This helped us quickly reposition and maintain that live feeling the entire time.”

Dugger and his team also helped the UP Network prepare for a quick postproduction turnaround by recording everything into an Aja KiPro workflow on both video trucks, and immediately transferring the content into the network’s editing servers.