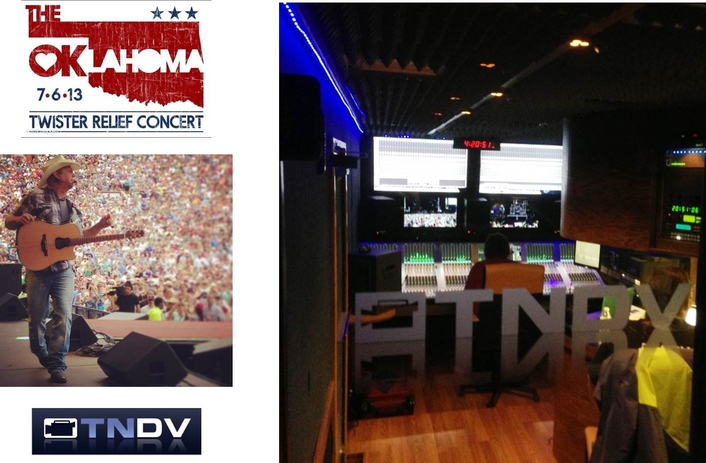 At the request of long-time client High Five Entertainment, an Emmy Award-winning video production company in Nashville, TNDV provided its new audio truck Vibration for audio multi-tracking and music mixing, along with technical management expertise.  TNDV donated its talent, time, and equipment to the cause of helping victims of the May 2013 tornadoes that struck the Moore, Oklahoma area.

“It was an honor and pleasure to be associated with this momentous benefit concert,” said Nic Dugger, TNDV’s owner.  “This was also the first project of significance for Vibration and it performed exceptionally well under very demanding circumstances.  Since the eight-hour concert came together in a relatively short time, our crew had to make swift creative and technical decisions and respond on-the-fly as the fast-paced production unfolded.” 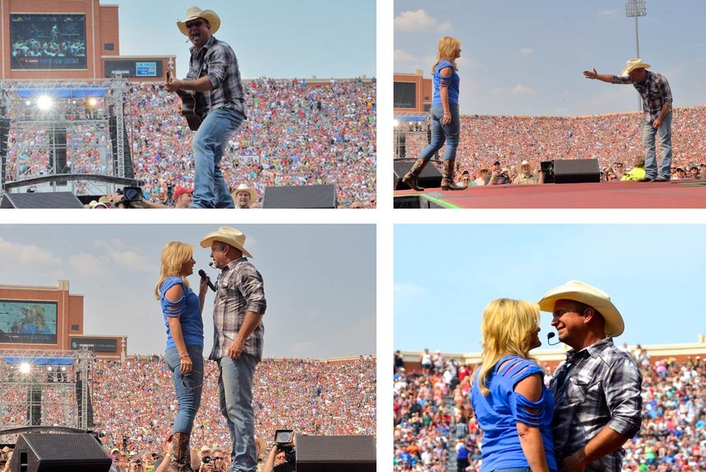 High Five Entertainment captured the performances and excitement of the day—culminating in a spectacular fireworks display—in HD video and surround sound for post-production. Considered one of the largest music concerts in Oklahoma history, High Five documented the event in anticipation of a network TV special and/or DVD distribution deal, to be determined.

While the truck can handle over 256 inputs simultaneously, the concert required mixing 128 inputs delivered via single fiber cable that ran over 1000 feet from stage to truck.  Using the video production’s video and timecode reference, audio signals were recorded onto Vibration’s ProTools recorders, with back-up recordings on four Joeco MADI recorders.  TNDV’s Ellis and Logan also positioned 10 Audio Technica mics around the stadium—including six shotguns directed towards the upper decks and four condenser mics at the front of the stage—to pick up ambient/crowd sounds to add greater dimension to the audio mix. 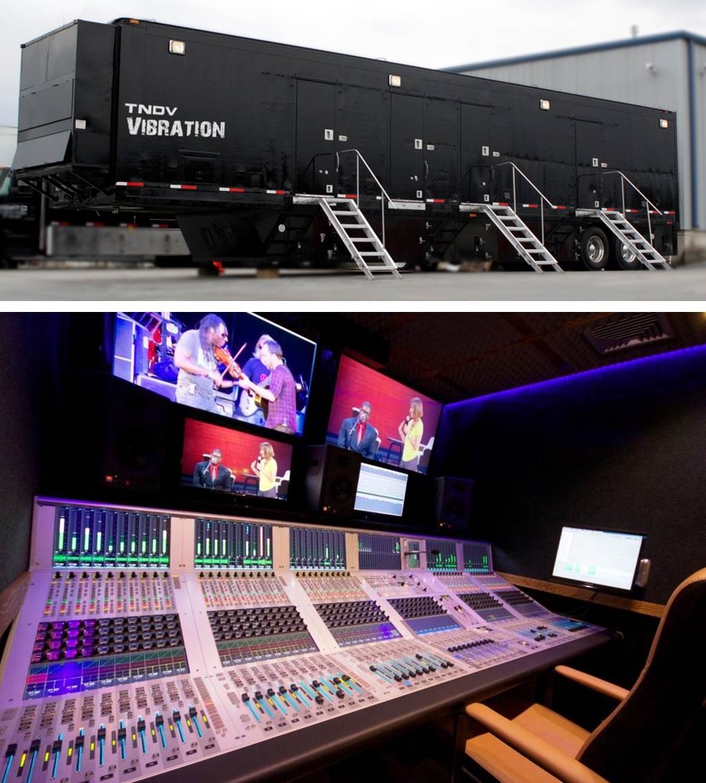 While mixing all the sound sources on the Vista 9 console, Mills Logan watched the 1080i HD video program mix—produced by the University of Oklahoma’s in-house production center using 13 manned HD cameras—as well as ProTools Mix Window displays on the truck’s four large Samsung multiviewers.  “The Studer Vista 9 console with ProTools recorders was a flawless combination,” said Logan, whose first hands-on experience with the console and truck was on set-up day.

“There was no time to do sound checks and there were only 20 minute breaks between performances. But the audio mixing and recording went very smoothly because the console was very intuitive, with lots of ergonomic, timesaving features, like the ability to pre-configure the board and instantly reset or recall memorized settings,” said Logan. Despite the enormity of the task, Logan said the console was a joy to work on and sounded fantastic.

According to Adam Ellis, who played a significant role in building the truck, “Vibration was designed to put freelancers at ease, even if they’ve never worked on a Studer Vista 9 before,” Ellis said.  “Having a simple, streamlined workflow is everything, especially during a live event.  The faster audio mixers get acclimated to the workflow, the sooner they can focus on being creative.  And that’s what really matters.”

ABOUT TNDV: Television
Formed in 2004, TNDV: Television represents the culmination of many years of broadcast and live production for Nic Dugger, owner and president; and his staff of full time engineers. TNDV produces events from small single-camera productions all the way up to multi-million dollar international TV events, and takes pride in building custom solutions for challenging productions of any size, in any situation.  Recent productions include the live concert productions at the NCAA Final Four, the 2013 Re/Max Long Drive Challenge on ESPN, and the inaugural season of Sing for Your Supper on PBS. Please call 615-585-6528 or visit www.tndv.com for more information.