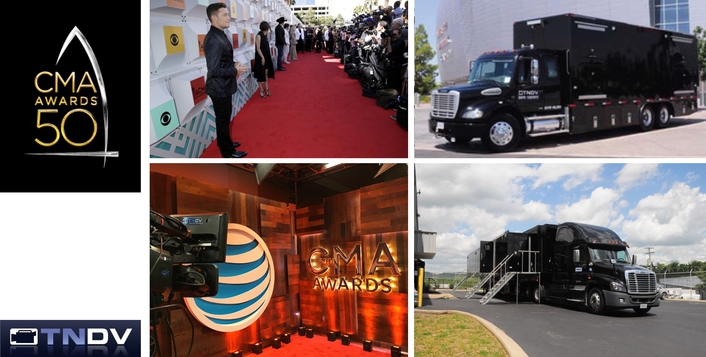 Nashville’s 2016 Small Business of the Year winner deploys its two flagship trucks for a Red Carpet special, backstage interviews, and other video/audio productions for DirecTV, ABC Digital and the Country Music Association

Mobile production specialist TNDV has taken its recently-launched Exclamation truck around the country over the past few months, powering live, multi-camera productions across TV broadcast, worship, corporate and other events. On November 2, TNDV flexed Exclamation’s 4K muscle for the first time at the 2016 CMA Awards, bringing DirecTV viewers stunning visuals of Red Carpet action and interviews for a live two-hour special.

For TNDV, the 2016 CMA Awards marked both a milestone and a homecoming. Taking place in TNDV’s home city of Nashville, the company—recently named 2016 Small Business of the Year by The Nashville Journal—celebrated its ninth year of association with the CMAs.

“It started with an idea they had about producing a single-camera live stream of their pressroom feed, and our responsibilities have grown every year,” said TNDV Owner and President Nic Dugger. “In a way, this remains our first priority: Working directly with the CMA to ensure that hundreds of media members can view the show and record audio, and acting as their technical liaison for all Red Carpet video and audio needs. This year we provided three live camera feeds to the pressroom over SMPTE fiber that captured limo arrivals, the very popular step-and-repeat, and a wide shot of the carpet and all the action. These feeds were available to more than 60 media outlets.”

The Sony and EVS equipment accommodations align with TNDV’s “a la carte” strategy, which on Exclamation are supported through a backbone that has all cabling, routing and patching in place to support simple hardware changes, as well as transitions between 1080p and 4K systems.

Joe Foster, a Nashville-based freelance technology manager working for DirecTV on site, noted that the quality of the infrastructure on board Exclamation along with TNDV’s expertise was instrumental to the success of what was his first live 4K broadcast project.

“I was in charge of physically building and managing the 4K encoding and uplink system, and with live 4K broadcast itself a very new delivery platform we needed a reliable crew above all,” said Foster. “Anyone can bring a big pile of gear to a show. High-quality technology is important, but the people that TNDV bring to the table, along with their level of expertise and what they are able to accomplish from a production standpoint, is what really drives the ship.” 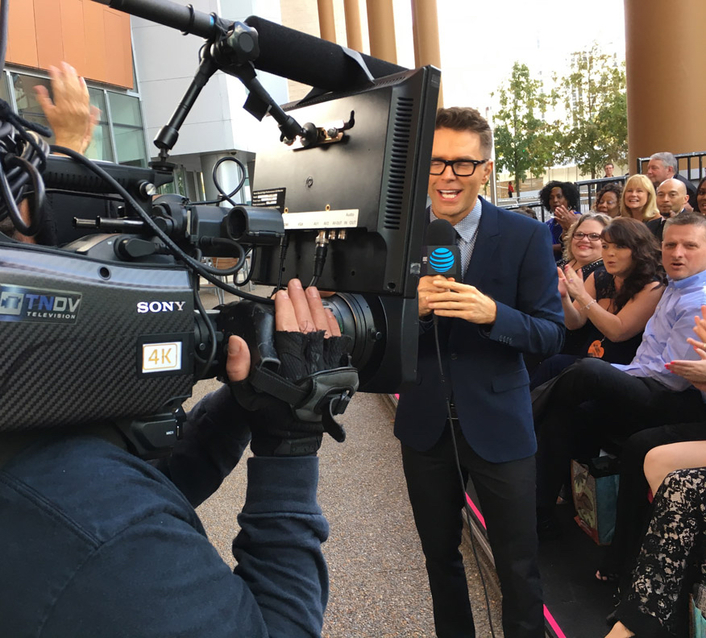 Another first this year was live streaming the ABC Backstage program over the network’s Facebook page, in addition to the usual stream on ABC.com that TNDV has produced for the past three years. TNDV employed Hitachi SK-HD1300 HD cameras to capture live celebrity interviews for distribution back to the truck, where it was live-switched to an onboard streaming server for delivery to the web and mobile platforms.

The same infrastructure was also employed for the “CMA Radio Remote,” an annual Awards event that hosts DJs from major country radio stations across the nation onsite. The event gives DJs an opportunity to broadcast live from Nashville in the three days leading up to the ceremony.

With so many simultaneous productions happening at once, Dugger dug deep to ensure that signal routing, monitoring, distribution and transmission for video and audio were well supported. Exclamation’s Studer Vista X provided mixing capacity for native 5.1 surround and 2.0 stereo feeds for the Red Carpet Special, while TNDV technicians strategically positioned wired and wireless crowd mics up and down the four-mile stretch to capture crowd excitement for viewers.

Meanwhile, a shared routing architecture between the two trucks supported 72 video inputs and 128 video outputs, along with 32 distinct multiviewer outputs that were utilized across all productions. Custom multiviewer outputs were also provided to large event sponsors, giving representatives from these companies a direct view into all event activities; and 112 digital displays were added to the pressroom to support more than 60 credentialed media outlets. 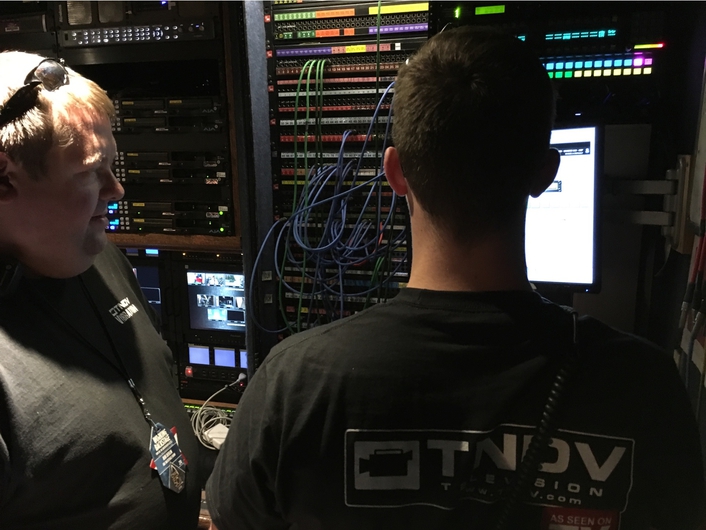 “We had 12 full-time staff members along a supporting crew of 30 freelancers to ensure expectations were exceeded for all clients, viewers and event sponsors,” said Dugger. “There were 30 crew members working inside Exclamation alone, each of whom needed to see various camera and instant replay feeds, audio streams and data at any time. Working with our onsite team and the staff at DirecTV, ABC Digital and the CMA, this truly felt like a unification of multiple Nashville TV production teams working together toward a common goal. It’s a proud moment to watch a production this enormous come together so organically.”

TNDV: Television
Formed in 2004, TNDV: Television represents the culmination of nearly 25 years of broadcast and live production for Nic Dugger, owner and president; and his staff of full time engineers. TNDV owns eight mobile production trucks (and multiple flypacks), producing events from small single-camera productions all the way up to multi-million dollar international TV events, and takes pride in building custom solutions for challenging productions of any size, in any situation.  Proud to be named winner of the 2016 Nashville Small Business of the Year Award by The Nashville Journal, recent projects include the live 4K Christmas Tree lighting with President Obama, The Amaerica Music Awards,the Stellar Awards of Gospel, and the NCAA Bowling, Fencing and Tennis Tournaments.