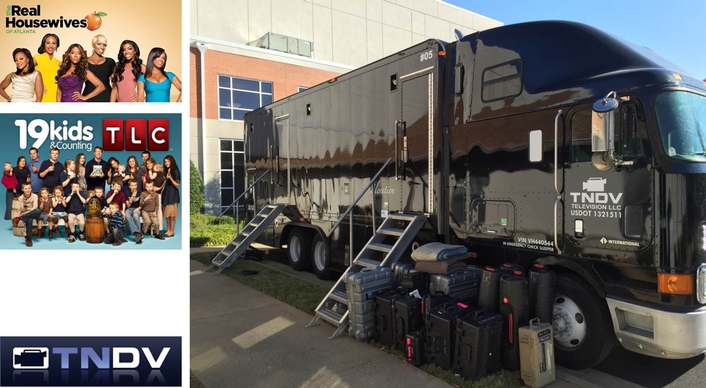 Mobile production specialist brings the unusual and unexpected to “19 Kids And Counting”, “The Real Housewives of Atlanta”
The secretive nature of reality television is a big part of the allure for viewers of programs such as 19 Kids And Counting, punctuated by the record-setting 4.4 million viewers that tuned into Episode 9 this season.  Though viewers were aware they were tuning in for the wedding of Jill Duggar, one of the popular show’s principal stars, they were treated to unexpected guilty pleasures associated with the story that Reality TV fans enjoy.

As Reality TV’s ongoing success is tied to the unusual and unexpected, the nontraditional approach of mobile production specialist TNDV has proven an ideal match for programs like 19 Kids And Counting and The Real Housewives of Atlanta — two shows that have recently relied on TNDV’s multi-camera expertise for special episodes.  TNDV also recently wrapped a multi-camera shoot for a second 19 Kids And Counting wedding — this one featuring Jessa Duggar — to air later in 2015.

“Most of the footage we shoot for these shows aren’t seen for weeks or even months,” said Nic Dugger, president and owner, TNDV, of his experience shooting the similarly surnamed 19 Kids and Counting family.  “While it’s fun to keep the plot twists under our hats, the real challenge is bringing our multi-camera experience to programs that are typically accustomed to single-camera, film-style shooting teams.”

TNDV’s flexible strategy for multi-camera shoots — Reality TV and otherwise — is fueled through its a la carte approach to mobile production, which carefully customizes the technology and workflow for each project.  The TNDV staff worked aside single-camera production teams from Figure 8 Films to strategize and enhance diversity in coverage, employing long lenses, jibs, Steadicams and robotic systems — all recorded independently along with multi-track audio.

“In the world of Reality TV, thinking on your feet and quickly changing course are valuable assets,” said Scott Enlow, producer and director, Figure 8 Films.  “Although we usually operate with an extremely mobile crew of 8-12 members for 19 Kids And Counting, bringing TNDV on didn’t hamper or slow production one bit.  Nic and his crew brought a problem-solving approach to challenges with a great attitude, and were willing to adapt to last minute changes with professionalism and ease.  TNDV was a great asset and contributed greatly to our highest rated episode in the show’s history, as well as the highest ratings for TLC in nearly five years.  I won’t hesitate to bring them on again, whenever or wherever the need arises.”

TNDV has used two different trucks, Elevation and Inspiration, for the two Duggar wedding episodes.  For the recently aired 19 Kids And Counting: Jill’s Wedding episode, TNDV brought Elevation, its newest sixth and newest truck, to the production site along with 11 cameras.  According to Dugger, each camera was timecode-locked with a shared timecode feed delivered to truck sources on Elevation on Inspiration, as well as the loose ENG teams following the various characters seen in the episode. 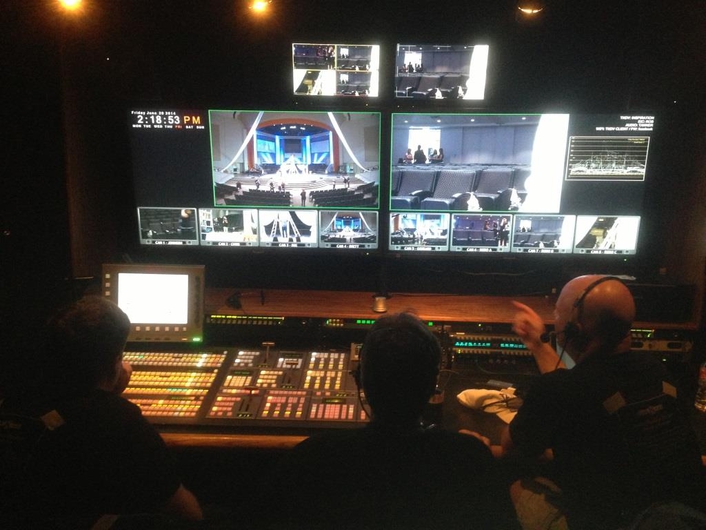 TNDV also added microphone drops across the production space to ensure the highest audio quality.  The provision of wireless microphones for every character on the show augmented the audio experience for the viewer, producing an intimacy akin to being in the room for the weddings.  Additionally, TNDV supplied intercom feeds to every member of the production team, including the single-camera production teams working alongside TNDV staff to ensure everyone involved was on a communications channel.  TNDV also adapted two-way radios to the intercom system to enable a truly remote intercom architecture.

“By avoiding the traditional expectation of a multi-camera facilities provider, our clients depend on us to address the challenges they are facing with a level of professionalism that surpasses expectations,” said Dugger.  “For example, the live switch was used, but the ISO recording was far more valuable as you rarely know what to expect in a live environment.  Things happen very quickly and the team needs to be prepared, especially considering there is not much time for load-in, testing and rehearsal.  It is our job to capture genuine moments, and we cannot let technical problems get in the way.  This is why having a high-density, multi-point intercom matrix with remote capability is absolutely pertinent in reality TV shoots.”

TNDV used its Inspiration truck for The Real Housewives of Atlanta shoot, exemplifying how the company has an ideal mobile production solution for every project.  For this special episode, the TNDV team followed documented the opening of A Mother’s Love, a new play written by Kandi Burress, one of the show’s principal stars.  Using a similar multi-camera production model, Dugger and his team captured the nervous energy — and ultimate success — of Burress and the rest of the cast as the play came to life.

“There is no production environment we are afraid to face,” said Dugger.  “We excel at solving problems for the unusual and unexpected in production, and enjoy the challenge of employing the right technology for every environment.”

19 Kids and Counting
The Real Housewives of Atlanta
TNDV