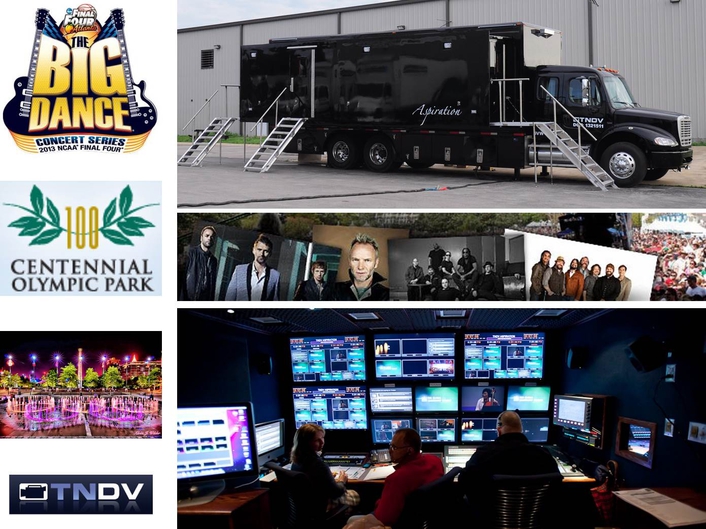 Mobile Production specialist to produce live concert audio and video for partial broadcast
TNDV heads to Atlanta early next month with its 40-foot expanding side mobile production truck, Aspiration, to produce audio and video for multiple live concerts during the NCAA Final Four tournament.  The free, three-day Big Dance Concert Series event, taking place at Centennial Olympic Park near the Georgia Dome, will provide entertainment for Final Four attendees, with portions airing on CBS and streaming live to the web.

The Big Dance Concert Series brings several local and national acts to the same stage each night.  Each concert is treated as a unique event, with different daily sponsors and special needs for each band.  TNDV will work alongside production specialist GoVision, which hired TNDV and will provide all large format video displays for the concerts; and Unlimited Visibility, which will oversee lighting and staging among other production tasks.

Aspiration is built to support large, multi-faceted productions such as the Big Dance Concert Series, with multiple cameras, high-capacity routing and switching, and a comprehensive audio suite on board.  However, the production challenges of injecting additional excitement across multiple events — and re-creating that excitement for home viewers — requires intense focus and dedication.

“This is a tough balance to achieve,” said Nic Dugger, president, TNDV.  “The on-premises crowd wants to see the show better.  They want tight shots of Zac Brown, and want to see the details of the instruments that the Dave Matthews Band is playing.  Home viewers want a more complete story, with wide crowd views and establishing shots that make them feel as if they in the venue.  Our talented crew will work alongside GoVision and Unlimited Visibility to accommodate both needs.”

Dugger anticipates special audio needs given the multiple band rotations, with TNDV producing special re-mixes for live broadcasts.  TNDV will use festival style patching with a digital stage box and MADI fiber to feed Aspiration, and add crowd microphones to ensure that the live sound is authentic with local crowd flavor.  The complete Aspiration audio production workflow will include ProTools multi-track recording and JoeCo MADI recorders. 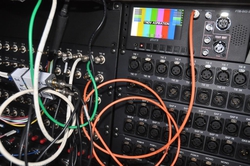 On the video side, Dugger expects on-demand Deko graphics and Harris Broadcast HView SX Hybrid multiviewers to play big roles, with multiviewers used inside and outside the truck to monitor live signals.  TNDV will also use multiple Aja Ki-Pro Recorders to provide quick recorded media turnaround to participating bands, and employ various up, down and cross-conversion tools to accommodate the GoVision displays and live broadcast feeds.

“The nightly change in sponsors creates significant operational challenges, including the ability to quickly reconfigure the technical infrastructure for different web streams,” said Brady Haass, director of sales, GoVision.  “Aspiration clearly has the capacity to accommodate three major sponsors and all of their interactive needs from a mobile production standpoint.”

ABOUT TNDV:
Formed in 2004, TNDV: Television represents the culmination of many years of broadcast and live production for Nic Dugger, owner and president; and his staff of full time engineers. TNDV produces events from small single-camera productions all the way up to multi-million dollar international TV events, and takes pride in building custom solutions for challenging productions of any size, in any situation.  TNDV specializes in creating productions that are of the highest quality while being ultra-mobile and always professional.  Recent productions include the Emmy Award winning Bluegrass Underground, The Grand Ole Opry Live and the inaugural season of the all-new Hot20 on CMT.