Lighting and production design is by DK Production Design of Evanston, Illinois, a turnkey visual solutions provider that worked with Creative Director Jamaica Craft on the look of the show.

Multi-talented singer, dancer and actress Tinashe is out on her 2016 “Joyride” world tour beneath an Elation Professional rig of SixBar 1000™ LED battens and Platinum 5R Beam™ moving heads with graphic elements displayed across an LED wall made up of Elation EMAG4™ LED panels. The efficient lighting and video package is highly versatile and creates surprisingly big looks for the moody but active show.

Their first tour with Tinashe, DK Production Design created the lighting and staging design as well as content creation for the LED screen together with Craft, who they have been working with for years. 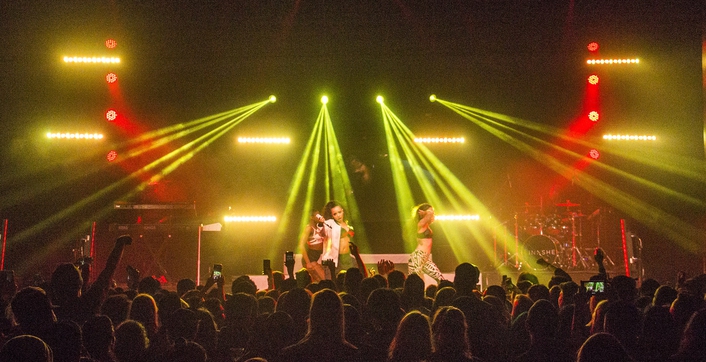 The SixBar color-changing battens, which feature a 6-color LED multi-chip, can be used for a variety of purposes - wash light, uplight, cyc wash, accent lighting, pixel strip and more. “We needed a low cost LED to fill the space and use the SixBars for big saturated color looks, to tone the rig and other purposes,” stated Daunté Kenner, Production Designer for the tour and Principal-Creative Director at DK Production Design. “We use 14 SixBar 1000s on the show and they have been a godsend.”

Daunté was introduced to the SixBars by Jason Reberski of JR Lighting in Orland Park, Illinois, a production-rental lighting provider who supplied the lighting and video wall package for the tour to DK Design. Although originally DK Design was only interested in a handful of SixBar fixtures for the tour, after they saw what the fixtures could do, they thought differently. “We weren’t sure how amazing they were until we saw them live,” Daunté says of the 3-foot long LED battens. “They are really punchy; they have a great UV LED and make a nice pure white. I also like the individual LED control. They are now the workhorse of the rig and are used on every song.”

Reberski notes, “We originally added the SixBar 1000 fixtures to our rental inventory as a general purpose wash/strip lighting fixture and were very impressed with the range of color and more importantly, the high-quality white-light-mixes that could be created. I personally like how the large TIR lenses are similar in size to MR-16 lamps, meaning that in a direct-view application like this, they have a significant ‘presence’ on stage.  After seeing the unique ways in which Daunté and Brandon utilized the SixBars on the Tinashe Joyride Tour, a whole new realm of possible uses was realized. What they achieved is incredibly impactful.”

The SixBar 1000s are spread across the rig with four surrounding the video wall plus three stage left and three stage right on towers for side lighting on performers. Six fixtures with frost filters are used downstage as side light to highlight dancers with an additional two fixtures up on outer towers.

Lighting and Media Director Brandon J. Clark, Jr., Designer at DK Production Design, serves as tour operator and shared programming duties with Daunte. He comments: “The SixBar is very multi-purpose and the primary visual element in terms of the design. We use it for texture and blinder effects as well as other eye-candy effects. One unique effect in particular we have on the show is a UV base that randomly pops cells to white,” a look that Brandon says you can only do with a 6-color LED fixture like the SixBar.

“Their homogenous output is a huge benefit that you don’t get with other LED strip fixtures,” he adds. “Also, we didn’t have dedicated strobes on the show so we used the SixBars for that purpose. You get the punch of all the LEDs when you use it as a blinder. They are able to cut through the rest of our rig and anything the house rigs may have.”

EMAG4 LED Wall
Located upstage center is a 10 x 5 video wall made up of EMAG4 LED panels, Elation’s 4.8mm pixel pitch LED video panel. “It’s the dominant visual piece and performs beautifully. The resolution is high and it has really made the client happy. It’s extreme value for the cost,” Daunté says of the EMAG panels, which include tool-less quick locks and a magnetic module design for quick setup and servicing. “The panels are quick to put together; it’s a one person job. It also works great in a tight spot, for example in a club. It helps to maximize the space and no extra people are needed to put it up.”

Media director Brandon Clark reports that with well over 20 shows under their belt, the EMAG panels have only had one minor issue. “We throw quite a bit at them and they’ve been extremely reliable,” he says. “It’s super quick to get up. The wall goes up in 20 minutes and down in 15 - I love the ease of assembly.” Video processing is from an Elation-distributed Novastar NovaPro HD™. “By far the best I’ve used,” Brandon says of the plug and play processor. “It works right out of the box, configuring was super easy and the interface is intuitive.”

Mounted above the LED screen is what Daunté calls his #1 go-to beam light, the touring tested Platinum 5R Beam. “We switched from the Sharpy and the Platinum Beams have become a staple fixture for our company,” he says. “The price is good and it’s lighter in weight. The beam with the frost is larger as well. We prefer it.”

Jason Reberski adds, “We have had the Platinum Beam 5Rs in our inventory for approximately three years and after multiple tours, thousands of hours of use and time on the road, they continue to work flawlessly every day.  They have been a fantastic rental piece.”

The 23-year-old singer began the North American leg of the “Joyride” tour on February 28th in Minneapolis, playing 30 dates across the United States and Canada into April with dates in Europe, Asia and Australia to follow later in the year.