Time Flies in Reverze with Wicreations!

The event, produced by Bass Events is the largest indoor hardstyle event, and  this year’s theme was ‘Guardians of Time’. The centrepiece of the set - designed by Peter Vervloesem for Amaze Productions - was a 4.5 by 4.5 by 5 metre high scenic clock. 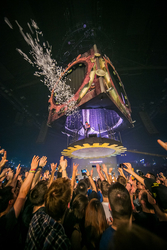 This was required to move approximately 50 metres from backstage to the rear of the Sportpalais arena.

Peter contacted Wicreations in the early planning stages of the event. The two have collaborated on many previous projects – including several Reverzes - and Amaze asked WI to apply their engineering genius to make the giant timepiece fly!

The clock had to track into a position to 40 metres off the downstage edge of the stage right amidst the audience … and in addition to that, it needed to move vertically, rotate in two directions and split into two parts!

The bottom part of the clock was to fly down and transform into  a flying stage, complete with the show’s MC and some dancers (who would travel inside the clock).

It was originally estimated that this might weigh around 3 tonnes, but as the design evolved, the weight increased to 4.6 tonnes largely due to being clad with LED screen on all sides!

“There were many challenges,” explains Wicreations’ Project Manager Geert Stockmans. He and the WI team drew on their previous experience of flying large objects and their extensive knowledge of  the Sportpalais – including an event in there for girlband K3, when they flew a giant sailing ship!

Using a selection of off-the-shelf kit from Wicreations, the hub of the design started to take shape utilizing WI’s stacking WI-Track truss. At this stage, WI’s Chief Engineer Wessel Fortuin became involved in optimizing the design with reference to the load bearing capacities of the venue and what was possible with the available equipment. 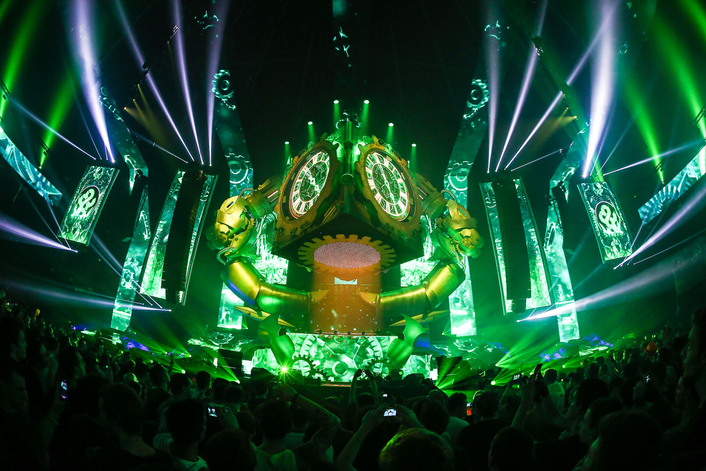 Several modifications also needed making to the set piece design itself to ensure it complied to all the safety requirements.

The motion was facilitated by the installation of a heavy ‘motion-grid’ on two 63 metre long tracking beams made up from 42 elements of the WI-Track, complete stacking truss with integrated WI-Track beams. (The extra 13 metres was needed for the travelling motion grid and its cable festoon.)

Mounted on the motion grid was a circular beam that could rotate the object, and eight zero-speed hoists, four of which moved the outer shell of the clock vertically. The bottom of the clock was a separate piece of set suspended on the other four hoists which morphed into the flying stage. 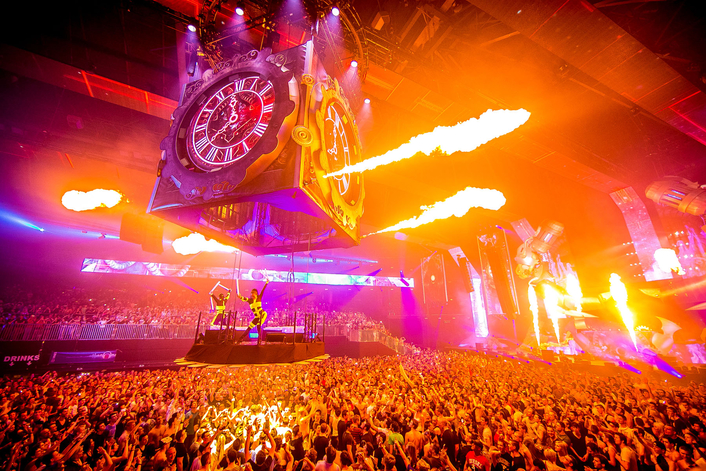 The total weight of the tracking mechanism when complete was 3.8 tonnes – plus the 4.6 tonnes set piece  - so a total of 8.6 tonnes in tracking weight, all of which was controlled via a Kinesys EVO system.

The clock stayed in its ‘home’ position concealed by the set until a third of the way through the show, with the first move coming at around 1 a.m. … when it took the delighted audience by complete surprise creating a massive WOW factor!.

The surprises continued as the clock moved 40 metres down the hall splitting in two and then revealing the MC and dancers as the flying stage emerged. 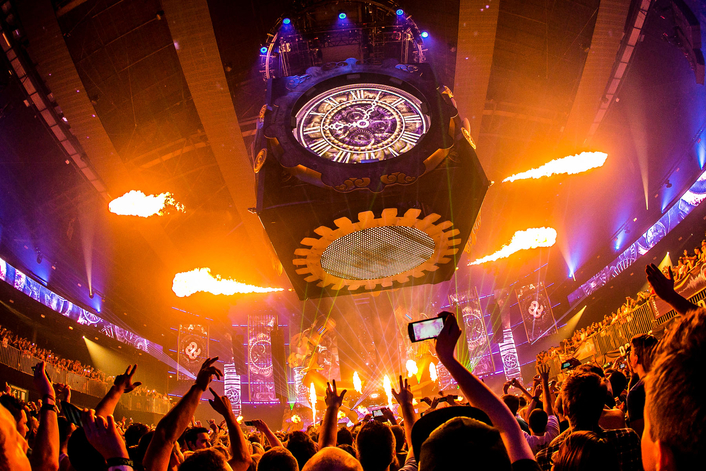 Everyone was delighted with the results, which took the event to new levels of technical production values and excellence.

Stockmans comments, “It will be a tough one to follow, but I am sure there will be more ambitious production plans for the next one! Pushing our standard WI equipment gave us a considerable new insight into our own products and was a very valuable experience, and we all enjoyed dealing with the challenges”.