Technology in the spotlight 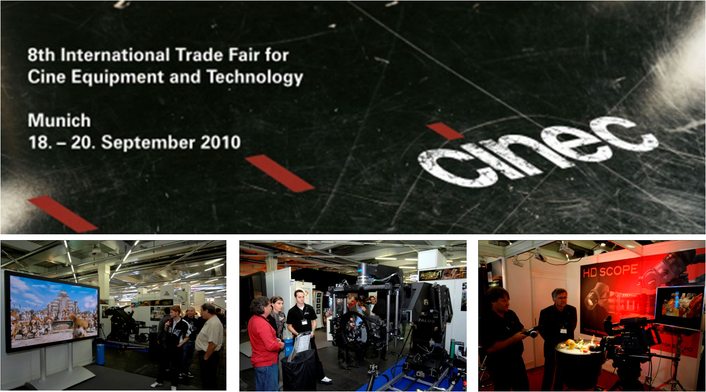 With the leading producers coming to the cinec in Munich in September, technology will be in the center of attention
150 exhibitors, 15 countries. The cinec is one of the most important events for cine equipment and technology and attracts visitors and exhibitors from all over the world every other year. With the leading producers and developers presenting their novelties in the M,O,C, Events Center in Munich, the film technology will be in the spotlight. The best innovations will be granted the cinecAward.

The prize, which will be awarded for the 8th time this year, has become one of the most sought-after awards for technological inventions in film production. It comprises a certificate and a statue which is inspired by the Munich symbol »Bavaria«.

The reference to Munich is not at all arbitrary. Thanks to companies like Arri, Panther, P+S Technik, Sachtler or GFM, Munich is a film technology hub. Its roots go back to times of the silent films and its developments set new standards for the world.

The cinecAward is presented by the Bavarian Society for the Advancement of Film Technology (FGF) and awarded to innovative and trendsetting products and developments in six categories:. Camera Technology, Optics, Camera Support/Grip, Camera Equipment, Lighting Engineering and Postproduction/Digital Editing. The development does not necessarily have to be expensive, but rather an eligible »clever idea«, which is time-saving or cost-saving or which facilitates the work on the set in other ways. An international jury of professionals and experts from the industry chooses the award winners.

This year’s jury consists of

Denny Clairmont (USA) is managing director of the Clairmont Camera Rental Company in Hollywood which he founded with his brother Terry in 1976. The rental company has branches in many cities of the USA and Canada.

Peter Claridge (Germany) was one of the founders of the postproduction studio Scanline in Munich and has been in charge of various film productions as a VFX Supervisor since, such as »Siegfried« (2005). As a director, the Briton staged – among others – three episodes of the TV series »Helicops«.

Stuart Gain (Great Britain) has worked as a chief lighting technician for many TV series in Great Britain. He is head of the Society of Television Lighting and Design (STLD).

Birgit Gudjonsdottir (Germany). The native-born Icelander has been a cinematographer since 1992. As an operator and 2nd unit, she contributed to international productions such as »Aeon Flux« (2004) and »The Bourne Supremacy« (2004).

Niels Maier (Germany) is chief lighting technician and one of the owners and managing directors of Maier Bros., a service provider for lighting, grip and camera equipment in Cologne with branches in Munich, Leipzig and Saara.

Prof. Peter C. Slansky (Germany) is the co-author of the »Handbook for professional video recording«. Since November 1999, he has been holding the chair in technology at the University for TV and Film (HFF) in Munich. Since 2008, he has been the director of its Center for Advanced Studies of Film Technology.

33 applications for the prestigious award have been received so far. All exhibitors (and co-exhibitors) of the cinec are entitled to take part. Deadline for applications is the 30th of August.

The cinecAward will be awarded during a festive ceremony on the second day of the trade show. The winners will be honoured at a state reception by the State of Bavaria in the »Kaisersaal« of Munich’s Residenz.

Come and see for yourself – in Munich from 18th to 20th September.

The new dimension
Start-ups at the cinec
Answers in 3D