The ARIA Awards are the official awards of the Australian Record Industry Association attended by an audience of over 4,000. The event was broadcast live on Channel 9’s “GO!” with performances from many Australian artists including Birds of Tokyo, Bliss n Eso and Tame Impala as well as special guest appearances from Alicia Keys and Lorde.

The ceremony was produced by Michael Long and Vicki Gerrans. Set design was by Kim Buddee. Stunning screen graphics were produced and operated by Rod Morris.

TDC supplied custom automated rolling screens with ultra-bright 26K HD projectors, that not only provided a uniform, succinct and clean look according to the set design but also acted as a mask for set changeovers. TDC also supplied 200 square metres of high-resolution LED video display as well as video projections and creative and scenic LED elements along with switching, control and technical crew.

ARIA Event Producer, Michael Long said: “We’ve worked with TDC for a number of years because they have quality product, they always deliver on time and within budget meeting our set designer needs and music act requirements. TDC has an excellent logistical and creative team that can cope well with any last minute changes. 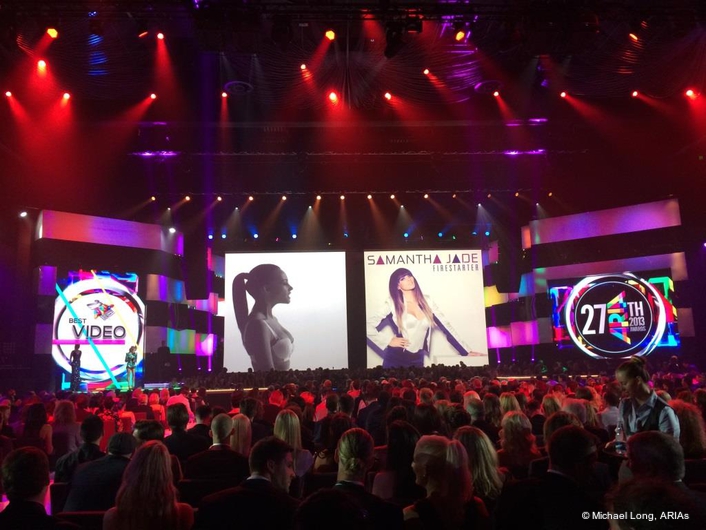 “For the Birds of Tokyo, Tame Impala, Jessica Mauboy performances and various DJ’s we used all 4 LED screens on stage along with two side screens. We created a specific look for act changeover where TDC’s two large projection screens came down and covered the stage. Because the venue didn't have the ceiling height, we had to think of something different and thankfully TDC had some special screens available. TDC suggested early on that we use 6x6 metre screens with custom-built truss to roll them in and out creating a seamless image and transition.”

Olin Winton, Technical Manager at Technical Direction Company said: “Creating a seamless video and LED video technology elements was vital to this project. We were able to utilize some of our highest resolution LED stock for the 27th ARIA Awards which created the perfect backdrop to the Australian and international music performances.”

“We really appreciate the support that TDC gives the ARIA Awards and the Australian music industry,” ended Long.