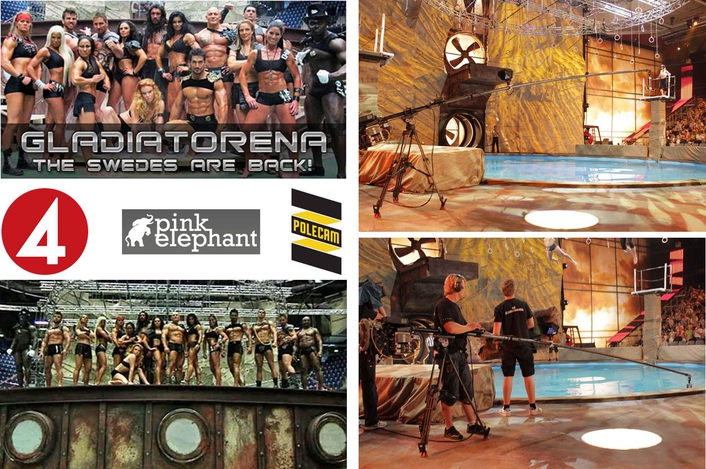 Polecam system on the autumn 2011 Swedish Gladiators production set
Contestants in the autumn 2011 season of Gladiators on TV4 Sweden came head-to-head with Polecam when production commenced at the Loefbergs Lila arena in Karlstad. Tommie Rekstad of Pink Elephant, one of Scandinavia's most active and creative television production support services, deployed a Toshiba HD camera in a Polecam FishFace housing attached to a Polecam rig.

"Aquatics is a strong element of this Gladiators series," Tommie explains.  "A 330 cubic metre pool with a depth of 2.5 metres forms a centrepiece of the arena.  Operating a miniature HD camera inside FishFace on our Polecam rig gives us the freedom to capture stunning underwater shots without stunning the swimmers in the process.  The combination enables us to track fast action with absolute precision which is quite a challenge when televising a contest between two deep-water swimmers at close range.

"Thirteen cameras are being used for the Swedish Gladiators.  Eleven trucks were needed to transport the infrastructure to Karlstad, the set and technical equipment taking a total of six weeks to construct.  Our Polecam system, in contrast, can be transported in a normal car and made ready for action within minutes of arrival."

An underwater head for use with a tripod-mounted or handheld Polecam rig, FishFace is a completely submersible pan/tilt unit and camera housing.  The head can be used to a depth of around 4 metres on the Polecam or in a free-swimming environment to a depth of 10 metres.  The carbon-fibre boom is designed to flood and drain quickly.  FishFace has 360 degree pan capability and fully unrestricted movement, identical to that of the standard dry head.  Live transition air-water-air shots are possible.  The prototype FishFace was used to great effect during diving at the Athens Olympics.

Tommie Rekstad has 23 years of experience as a photographer for film television and media production, including the Olympics in Beijing in 2008.  Pink Elephant specialises in using Polecam portable rigs with high-specification cameras and a wide range of peripherals.

Gladiators is a sports entertainment television show that has experienced great success in Australia, Britain, Denmark, Finland, Germany, Nigeria, Russia, Saudi Arabia, South Africa, Sweden and the USA.  Athletic members of the public battle against the show's own Gladiators (most of whom are semi-professional or ex-athletes) to claim points in several events that require speed, strength and skill.