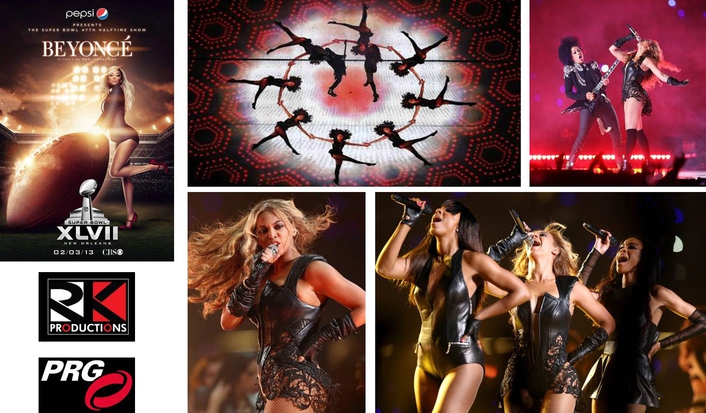 .
After months of designing, planning, and preparing, the Pepsi Super Bowl XLVII Halftime Show took the field in just under eight-minutes, powering up in only four minutes. Then, in just 12-minutes, a full concert quality production with lights, video, and even pyrotechnics was presented to an audience of over 108 million people worldwide. For the high-profile live event, Production Resource Group, L.L.C., supported Lighting Designer Al Gurdon, providing the lighting package and the lead lighting labor for the spectacular Halftime show. This year’s production, executive produced by Ricky Kirshner of RK Productions, featured Beyoncé along with a reunion performance of Destiny’s Child.

Lighting Director and Gaffer Rich Gorrod worked closely with LD Gurdon to help take the design from paper to production as efficiently and seamlessly as possible. “This is my fourth Super Bowl Halftime show so I had a good idea of the considerations and challenges that are unique to this particular event and Al is very aware of how to get the most out of his designs while also addressing the challenges of this event,” says Gorrod. While still in London, where both Gurdon and Gorrod are based, Gorrod input the system into Cast Lighting’s wysiwyg system and patched the show with programmer Michael “Oz” Owen. Working at PRG’s East Molesey office in the UK, the team setup in PRG’s previz suite using the PRG V676® Lighting Control Console, which was Owens’ console of choice for the halftime show. 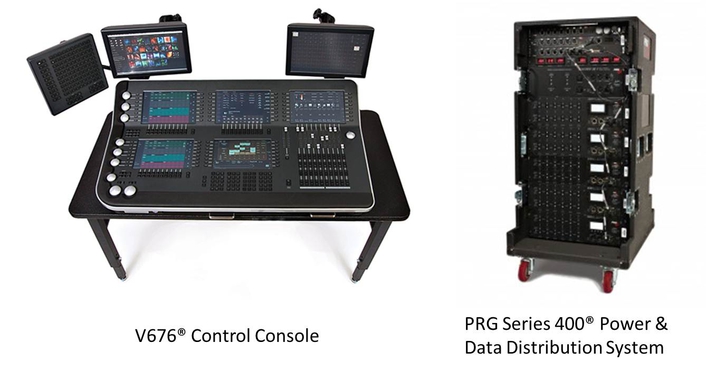 The Halftime show is unique compared to other large-scale productions as there is very little time on site to work with the full lighting system and the whole set on the field, so much of it must be pre-programmed. “With this show, I would say that 90% of it was programmed virtually,” points out Owen. “After doing wysiwyg programming in London at PRG, then we went to New York and set up our wysiwyg system at the Alvin Ailey dance studios where Beyoncé was rehearsing. We also had a set up in New Orleans as well to keep working on the programming.”

Knowing that the critical backbone for the lighting system was the power and data network, Gorrod laid out the system by choosing to once again use the PRG Series 400® Power and Data Distribution System, which offers solid reliability and streamlines the distribution runs while decreasing failure points. An important consideration since the production required extremely long data runs from the FOH control position to the numerous lighting locations around the New Orleans Superdome. It was over 1,000’ from the FOH position in the press box level down to the field. “We took full advantage of the PRG S400 system,” comments Gorrod. “It’s great, especially in such a large stadium. Using the fiber optic cable with the S400 allows us to cut down on the optos we need to boost signal for the data and cuts way back on the amount of cable needed.” The team ran DMX over Art-Net along fiber optic cable running a main line, back up, and a redundant back up fiber line between locations.

“There is a lot of data coming from Oz’s console,” explains Gorrod. “So when I laid out the patch in London for the pre-viz sessions, I did a lot of balancing of the data across the nodes to make sure it moved quickly around the stadium.” Owen operated the show from two PRG V676® Lighting Control Consoles, one main and one backup. The V676 console output Art-Net into three S400 7-Port Switches, which split out into 11 PRG Node Plus units. Four streams of Art Net data were sent to video programmer Jason Rudolph’s computer to convert to a DVI signal. This allowed Owen to control the 1,466 LED pucks that outlined the edges of the stage, which was shaped to look like the profile of Beyoncé’s face, via the lighting console. The PRG Node Plus units distributed 38 total streams of Art-Net around to the various lighting positions. Just for the stage alone, there were 10 streams of Art-Net used for control. All of the S400 node positions, FOH, and around the stadium were furnished with uninterrupted power supplies. 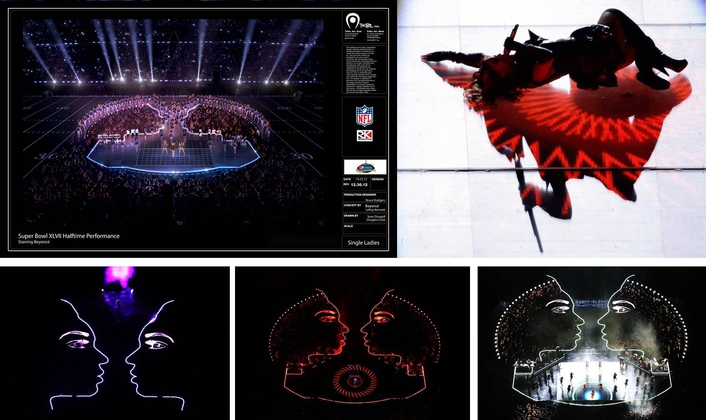 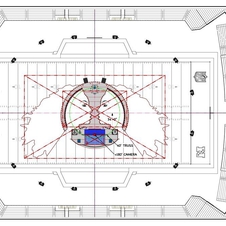 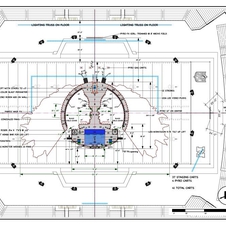 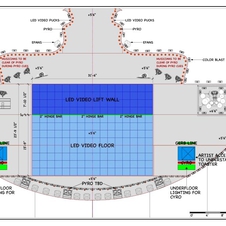 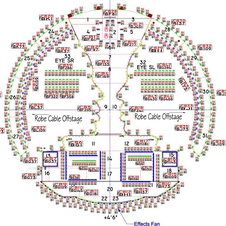 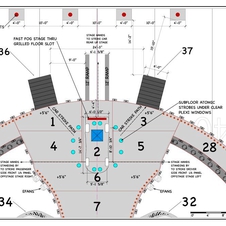 Owen likes that he can setup the layout of the V676 to how he prefers to work, using the console’s Plan View layouts as his starting point to select lights. “If someone says ‘go to these lights,’ I go to it on the Plan View layout,” he explained. “I find that it’s much more efficient than trying to find a lamp on a paper plot. With the V676 I can efficiently layout the lighting rig very geometrically but in various different layouts. Some layouts the lights are just in long lines; some are in groups that I will use; some are in layouts that are more 3D accurate. Depending on what I’m doing I can switch between those layouts to select lamps. I also prefer the effects system of the V676, which takes custom-made groups and applies them to sequences of presets. Most lighting consoles apply wave dynamics applied to the mechanism, but I don’t like that method. I like building effects as I can do with the V676. With a show that is ultimately very tight to time and the tempos are very regular, I like to program all of that with realtime parameters so I can very precisely time things to the tempos of the music.

There’s a new feature of the V676 that Owen used on this year’s Halftime show—DMX input, which allows for any console to be used as a fader wing with the V676. “PRG has put a DMX input into their console so we can map any regular desk with faders to be the V676s faders,” Owen explains. “In the V676, there are three banks of 10 submasters. For the show, I put everything on the first bank of 10 submasters, which are all on the surface. Then I had a separate Leprecon console I used as a wing with 20 faders full of inhibits, so that during the show if anything is flaring into camera, I can quickly grab it and pull it down.” Owens concludes, “The V676 was again rock-solid for the show. It had absolutely no problems at all and as always, PRG gave me good support on the show. It was fantastic, which is nothing unusual from them.” 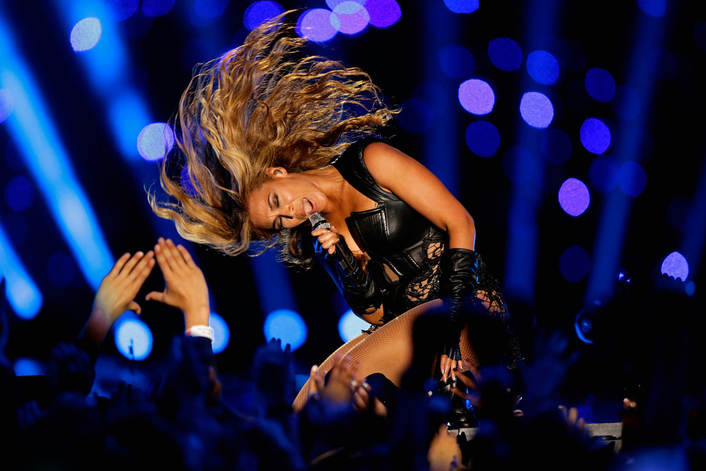 As the lighting team and the PRG crew took to the field to set up the Halftime show they knew they were ready because of their intense preparation and experienced planning. The result of everyone’s hard work was a problem-free setup, in record time and the 12-minute spectacular show came off perfectly.