Successful Start for Joko vs. Klaas - The Duel Around The World 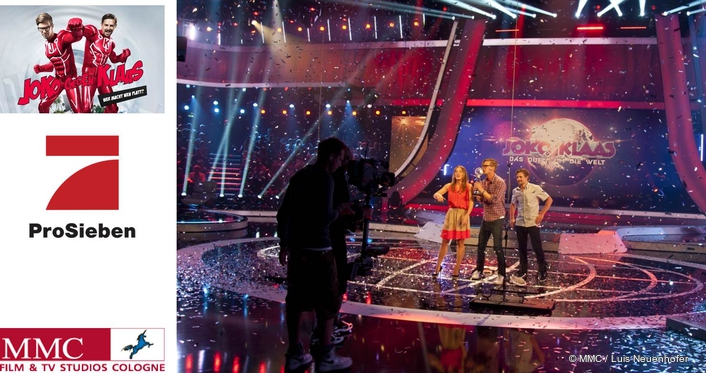 Joko (center) has won the duel around the world and celebrates his victory at MMC’s studio 36
On Saturday, July 21st, 2012, the channel ProSieben broadcast the new show Joko vs. Klaas—The Duel Around The World. The identity of the ultimate world champion was decided at MMC's studio 36 in Cologne, Germany.

Joko versus Klaas: Who triumphs over the other?
Who is the cleverest, the strongest, and the most courageous? Joko Winterscheidt and Klaas Heufer-Umlauf were determined to find out and engaged in an epic duel. Their crazy duel led them on a tour around the globe: each guy designed the other’s travel route and "special" travel program.

Joko sent Klaas to the East: in Macau, the 28-year old had to attempt the longest bungee jump in the world and in Thailand he had to fight blindfolded against a kick-ass Thai boxer. Klaas also came up with some spectacular tasks and sent Joko to the West: here, the 33-year old, had to stay in the rain forest of Ecuador for two days and get through an Ayahuasca (psychedelic medicine) ceremony. In Mexico, he had to let himself be thrashed by a female wrestling star.

Ultimate World Champion Wanted
The championship wasn’t decided during their worldwide adventures, but in the MMC studio 36, where the show was recorded on behalf of Endemol Germany. Here, the TV-presenter duo had to prove courage and perseverance in further games. In the end, Joko Winterscheidt prevailed against his opponent, Klaas Heufer-Umlauf, by two points. Joko won the duel around the world 3-1 and enjoyed the cheers from the audience as ultimate world champion. 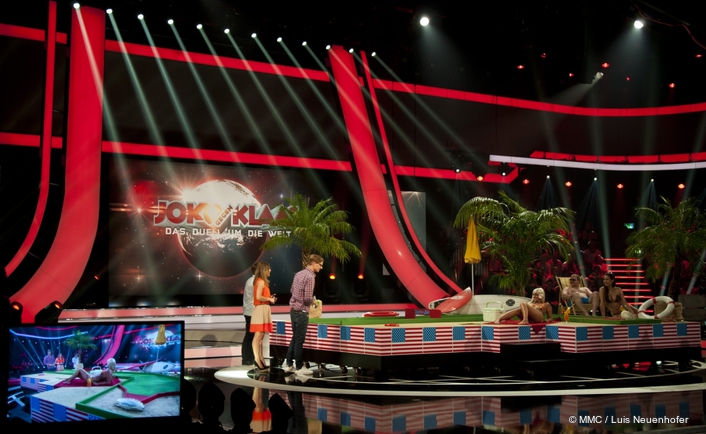 "Joko versus Klaas" Launched Truly World Champion
The new show Joko versus Klaas—The Duel Around the World had extremely successful ratings and was the most-watched show of the day by the targeted audience.

This first edition of the ProSieben show attracted 1.36 million viewers among the 14 to 49-year-olds—more than any other channel on Saturday. With a very good market share of 15.5 percent "The Duel Around the World" was the day’s winner. A total of 1.8 million viewers watched the show, corresponding to a good market share of 7.5 percent for the total audience (aged 3 years plus).

The Production
Mark Achterberg directed the HD-production, for which a total of 11 cameras were used.

The playbacks were carried out via four channels on a Grass Valley Summit Server. For the highlight editing and the super slo-mo playbacks, an EVS XT2 was used. For the recording, seven Sony XDCam VTRs were available.

MMC’s Art Department was in charge of set design, set construction and creating the studio games. The tasks included the design and the construction of the set and the decoration, the game design and development, the technical preparation and implementation, the kinetics and the safety technology, among others.