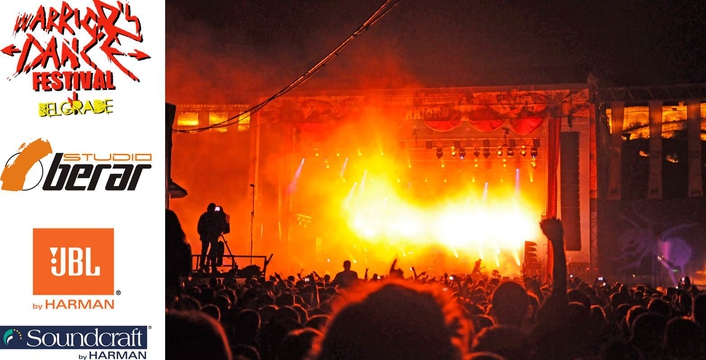 The music at the Warriors Dance Festival favored heavy beats and heavy guitars and joining The Prodigy in Eastern Europe's party hub were acts such as Skrillex, Caspa, Zane Lowe and Feed Me, while Ritam Nereda, Goblini, Eyesburn, Lollobrigida represented the domestic forces. As the leading hire company in the region, which has built its reputation over almost three decades, Studio Berar was contracted by The Prodigy and the AAA Production team to satisfy an audience of over 20,000 fans who massed at the main Warriors Dance stage and two supporting stages.

Momcilo and Emil Berar project-managed the entire event for Studio Berar, while the audio team was led by system engineers Ivan Paplacko, Zoran Matic and Aleksandar Pejin. The company fielded its front-line JBL VERTEC rig, while each performing band brought its own sound technician to pilot their show mixes on Studio Berar’s Soundcraft Vi6’s at both the FOH and monitor positions.

According to Studio Berar’s Marketing Manager Lazar Josanov, the Warriors Dance Festival offered many sound technicians the opportunity to work on Soundcraft’s Vi6 consoles. “A lot of the engineers who worked on the Vi6 for the first time were like children with a new toy!”

Josanov added that the clarity and strength of sound impressed both visitors and performers. “The whole festival sounded great, and all bands who performed, both local and visiting, were more than satisfied with the overall production,” he said.

The Prodigy themselves took the stage at 1:00 A.M. and with the very first rhythms brought the audience into delirium with their unstoppable movement and energy. “The perfectly clear sound shook the fortress area while the fantastic lighting effects were in perfect coordination with each song beat,” Josanov added.