The convergence of lasers and video happens at the awards show
To help the 2013 Latin Billboards Awards make a strong visual impression, Media Designer and Screens Director Scott Chmielewski called on the laser experts at Strictly FX of Chicago to create his vision of combining video content with lasers. Chmielewski, President of DMDS7UDIOS says, “I contacted the boys at Strictly FX, because they’re the only ones I would trust with such a concept.”

The concept, which was focused on eight scenic sails on the set, included accenting the visuals within pieces of content, as well as providing a continuous outline on the sails. Strictly FX Partner and Visuals Director Ted Maccabee gave Chmielewski a reluctant nod to the project, after doing demos on site in Chicago. Maccabee states, “They were looking for a sustained creative image accent generated by lasers, which is more of an artistic visual than what’s typically done with lasers.”

Chmielewski   was confident that the combination of effects would work, and it became an integral visual part of the production. In fact, it appeared in all of the non-performance moments of the show.  “I was really amazed at the way it turned out, and it really opened up some ideas for me,” Chmielewski states. The technique was also featured working with the video content during the live performances of the majority of the acts, including Pauline Rubio, Wisan and Yandall and Don Omar. The integration was of the two mediums was seamless. “You really weren’t able to tell that two different visual processes were being used,” comments Strictly FX’s Laser Programmer Grant Sellers. The show also featured two 20 watt lasers on stage that we used to create beam shows for various artist performances.

The effects, which are the first shots across the bow of laser and video convergence, were achieved using four 30 watt Kvant RGB lasers positioned on the front of house truss. Chmielewski explains, “We didn’t want to see lasers at all.  We also wanted things spread out incredibly large surface areas, we needed the colors to be saturated, we needed to be very controlled, both from a safety and a creative standpoint, and it needed to be incredibly accurate.” 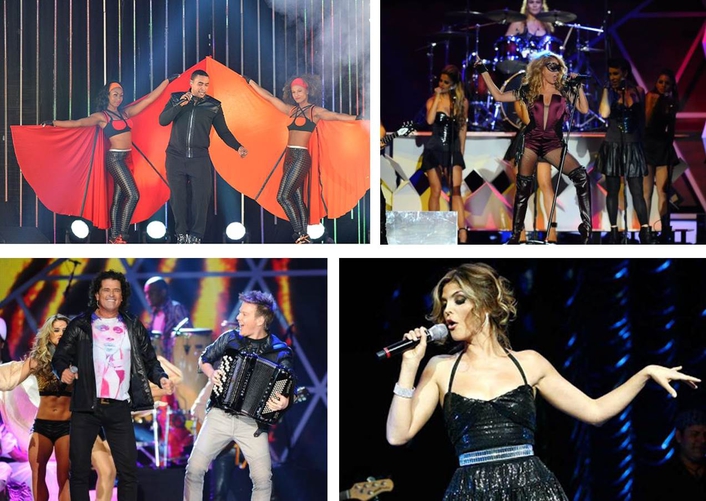 To create the effects, Strictly FX used laser mapping to create a solid outline, as well as to add ‘pop’ to specific graphic visuals. The looks are achieved through incredibly cue intensive programming; Sellers used a Pangolin console with Pangolin’s Beyond software. Sellers explains, “The combination of the board and the software gives me the capability to do detail programming, and it also provides powerful playback control.” Working with Sellers on the programming was Doug Cenko; the crew also included Wes Fiske and Marcus Wade.

Chmielewski and his clients at Telemundo were more than pleased with the results of the laser mapping. “Strictly has now become my go to effects and laser company. Their willingness to understand the technical in combination with the creative really makes them a genuine creative partner,” says Chmielewski.  In the same vein, Maccabee has nothing but good things to say about Chmielewski and Telemundo. “You need to partner with the right creative people, and that’s what makes all the difference in the finished product- for us, Scott and Telemundo were the right clients and the right time, and we worked together to further the state of the art in regards to live productions.”

Strictly FX specializes in world class pyrotechnics, artfully programmed lasers, cryogenic effects and more for live events. The firm also holds several industry specific patents. The firm was founded in 1996 by industry veterans Mark Grega and Ted Maccabee, and developed a sterling reputation for pushing the creative boundaries and exceeding worldwide safety standards, all while staying deliberately under the corporate radar. The office has grown to include a road worthy team of special effects technicians, in house artists, as well as a detail oriented office staff that’s knowledgeable about regulations faced by the industry around the globe. Clients such  Roger Waters, Coldplay, Justin Bieber, the Black Eyed Peas and more have reluctantly yanked the firm out of the metaphorical haze, and, as a result, they’ve won  numerous industry awards, including the Parnelli Pyro Company of the year  in 2007, 2009, 2010, 2011 and 2012, as well as the "Top Dog" pyro company of the year 2013.