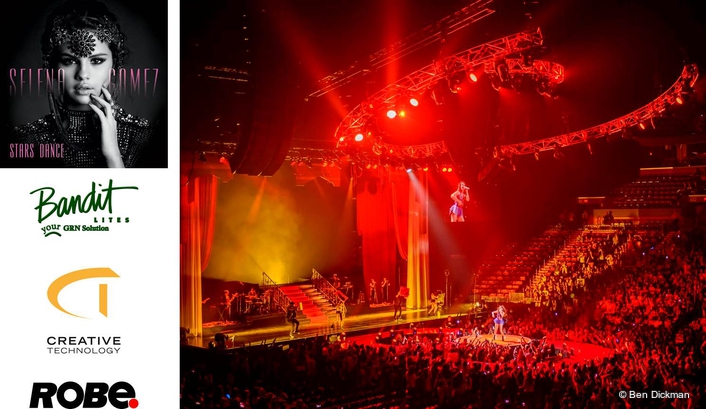 .
When Selena Gomez discussed the ambience she wanted to create onstage for her ‘Stars Dance’ world tour with Artistic Director Seth Jackson, she described elegance and style, replete with a touch of classical, shimmering ‘star quality’ reminiscent of the mystique of Hollywood’s golden era.

This was the creative starting point for the acclaimed and highly visual tour production that has evolved, the results of the talent and imagination of a serious creative ‘dream team’ comprising Seth Jackson, also the show’s Production Designer, Lighting Designer  Nathan W Scheuer and Video Director Brent Sandrock, together with Lighting Director David ‘Fuji’ Covertino at the core. 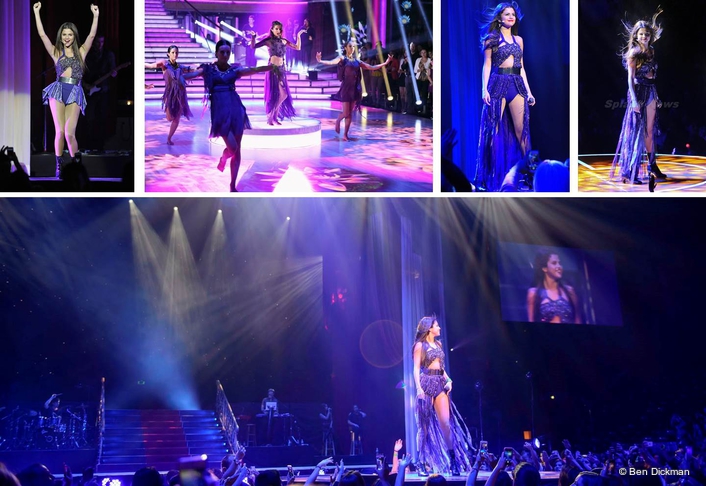 Jackson and Scheuer specified over 80 x of Robe’s newest moving lights to be the hub of the lighting action, which were purchased by the tour’s US lighting vendors Bandit Lites when it kicked off in August. The decision to go with Robe was made after a visit by the pair to the Robe factory in the Czech Republic earlier in the year.

They decided to spec these because they were really impressed with the “Precision and care taken in the manufacturing process and the genuine interest that Robe’s management takes in their clients, products and future”.

The Stars Dance show is divided into four sections, each with its own distinctive dynamic and pace. “It starts off with a bang and continues to take the audience on a roller-caster ride all the way,” says Scheuer, on a journey encompassing drama, fantasies, visions and a complex mixology of musical genres … all building to a massive high energy dance party vibe at the end.

Apart from keeping audiences fully and enthusiastically enthralled   … the show allows many different facets of the lighting to be revealed which is a great showcase for all the Robe technology.

“The Robe products have gone above and beyond our expectations,” confirms Jackson talking about their performance and adding that the reliability and consistency of the fixtures and their unique look has helped “Expand the success of the tour”.

For Scheuer, whose background includes extensive work in lighting theatre and dance shows, the biggest ‘game changer’ has been The Pointe and the LEDWash 1200s.

The Pointe “Is a fantastic fixture” that can be used for multiple tasks from throwing texturing onto the band, to producing key colour washes to bright, tight beams that verge on laser simulation. “The diversity of the Pointes has enabled our rig to look double its size,” he states.

The LEDWashes also have a massive impact on the show and are used throughout in a plethora of ways. The sheer brightness of the 1200s means just eight can be used as full audience ‘blinders’ in arena venues, whilst the zoom allows tight focusing of the beams along the S-shaped runway that comes out from the stage into the crowd so it can be neatly highlighted with no spillage.

Jackson adds that the beam output of the LEDWash 1200 “Is quite remarkable” and he’s also struck with the fact that such bright fixtures have an LED source - with all the advantages that brings like speed, light weight and reliability.

For Scheuer, the seamless colour mixing of the Robe LED products is “A beautiful edition” to the rig and beam wise, they appreciate the full appearance of the beams which have the appearance of a ‘conventional’ source with no blockiness or pixelation.

In addition to crafting a fabulous looking show, Scheuer points out that the lighting design had to be ultimately flexible and practical to rig each day, allowing the essence of the full rig to be recreated for the European section with different kit.

‘Stars Dance’ – currently scheduled to run until mid December - has been a huge success, earning amazing reviews on all fronts from Selena Gomez’s sparkling performance, her incredible connection with audiences and the classy, slick, visually integrated production which raises the bar in every respect. 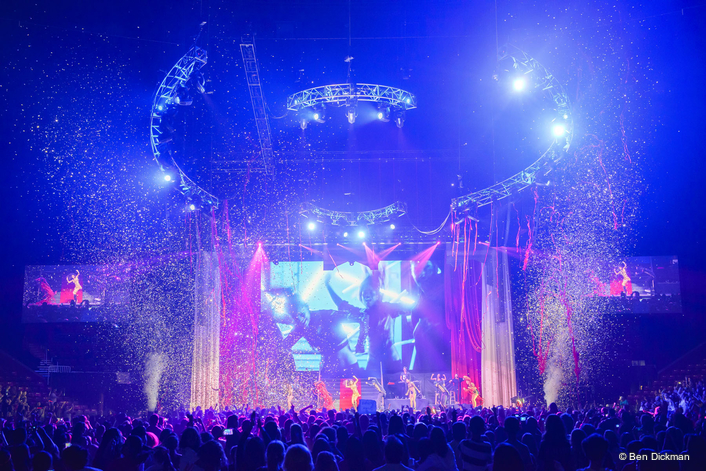 “It’s an incredible experience and a credit to the team that built it,” concludes Jackson.

Other key members of that production team - in addition to those already mentioned – include Production Manager John Lafferty, Tour Manager Mark Holloway, Mike Golden from Bandit Lites, Sew What who supplied all the drapes and softs, Mark Haney from CT who delivered the touring video and Joey Jr. & Sr. at set builders Gallagher Staging.