Standing Still is not an Option

Eurovision Song Contest in Baku produced with Lawo technology
“Standing Still” is the German contribution for the Eurovision Song Contest finals on May 26, 2012, performed by Roman Lob. Standing still is a thing completely alien to the Belgium TV Broadcast and OB van provider Alfacam: For ten days, five OB trucks with up-to-date technology were on their way to Baku for broadcasting this event in optimum quality. After this job, they will go straight to Kiev for the European Football Championship 2012 and then travel on to broadcast from the Olympic Games in London. Regarding sound, Alfacam relies on Lawo technology – like the routing system Nova73 HD and the mc²66 consoles.

From Belgium, the trucks took the road to Romania, passing the Black Sea to transit Georgia and finally arrive in Aserbaidschan’s capital Baku, this year’s venue for the Eurovision Song Contest (ESC). For the world’s biggest music show, with viewing rates surpassed only by major international sporting events, Alfacam uses five mobile trucks: four OB vans are dedicated to handle the sound mix and the show mix while another one will be used as the Master Control Room (MCR). In the workflow on site, one sound OB van will produce the music mix (live music and playback), the other sound truck will work as backup.

A large TV OB truck is in use for the final TV mix, which includes the presentation, the famous video clips from participating countries, the ambience, the music mix from the sound mobiles, plus many other signals. And working inside the truck at the controls is Stefan Ebert. Also, this TV OB van uses a second one as a back-up truck. The fifth mobile unit is used as MCR for the European Broadcasting Union (EBU) to establish the many broadcast connections to the broadcasting countries.

High sound quality and simple operation
The ESC 2012 team is particularly positive about the sound quality of the mc² console. For example, the ESC has been produced for years in Dolby Surround Sound; many remote replay machines and other sources, however, are still stereo. For a consistent 5.1 mix, sound engineer Ebert utilizes the Lawo Upmix AMBIT: “It is stunning, how good the downmix according to EBU norm sounds. The noticeable artefacts you usually have by using such tools are practically inaudible,” explains Ebert.

The fully redundant mc²66 consoles, he confirmed, are also very efficient tools, particularly with regard to handling: “We produce in surround here and thus always have a huge number of channels. Via the Surround Faders feature, there are always six channels combined that are only revealed on demand (Reveal function). When you have to manage this many channels permanently during the ESC production, this tool is a major help, says Norbert Garske, Chief Audio Engineer for the ESC in Baku. Another “delicacy” are the perfectly working compressors: “Beside its conventional use, we are also using the compressor here in a special application: As for security reasons, always two ProTools systems with 16 channels each are switched on in parallel, both are supplied with signals. For the automatic switching to the backup system, we assign both ProTools to two Modlink faders and, with the compressor set for Ducking, turn down the level of the backup Protools completely. The backup ProTools is triggered via timecode by ProTools 1. This way, if the first ProTools fails to feed any audio signal, the compressor opens the second ProTools automatically,” explains Garske this special application. 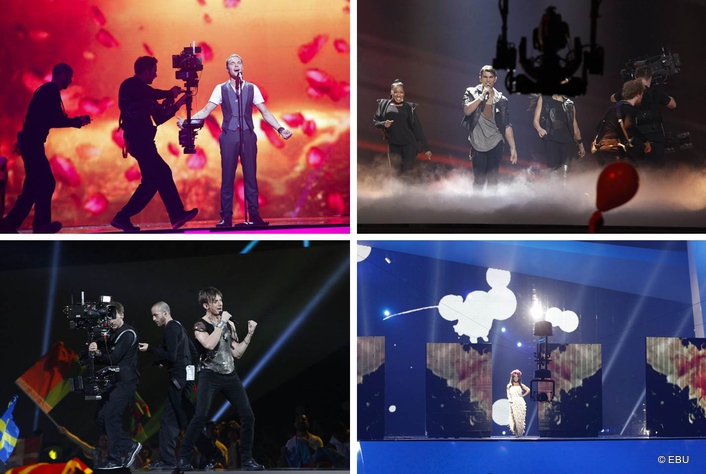 Lawo Routing System as Control Center
The audio team also takes over some of the directing: Multitrack machines supply a timecode that is sent via the Lawo router to practically all maintenance groups within the production task. Using this for automated triggering, the light settings and projections are started, the pyro technics are fired and, in the end, the director always knows at which position of the song title he is. This guarantees that the individual artistic ideas for the overall picture can be recalled in perfection.

All in all, eight Lawo stage boxes are in use for this major event, more than 120 wireless channels are routed safely and with clear overview.

“For Alfacam, it is particularly important that the combining mixing console stageboxes, adapting the DSP capacity, and the router configuration can be carried out very easily and without losing snapshots or the need to ask Lawo for support”, elucidates Ebert. Thus, Alfacam can also use technology from different OB trucks and rented DSP boards from Audio Broadcast Services in a new configuration for this event and configure it independently. “This capacity, flexibility and absolute reliability only Lawo Routing Systems offer”, closes Garske.