WI has previously worked with Dragone on several projects explains project manager Koen Peeters, and for this one the show creators turned to them to provide solutions for several staging conundrums … all of which had to be delivered in an extremely short timeframe!

With the tour commencing in Russia, crew visas, paperwork and transportation needed special attention, in addition to all the engineering and physical creative work!

Flying Wings
The first WI element of the project was to create 14 aluminium flying wings and a kinetic system to make them move. All of these flying elements have an integrated LED lighting system that allows spectacular lighting effects.

All fourteen wings were used for five shows at The Kremlin in Moscow that launched the tour, after which 10 wings continued as part of the touring set up.

The wing flying system needed to be super lightweight, so the wings are flown in the roof on bespoke tracking trolleys that house two zero-speed chain hoists for the 14m high flight path, and run from left to right on 3 metre span tracking beams. These are all suspended on the production’s trussing and programmed into WI’s control software which regulates the movements. 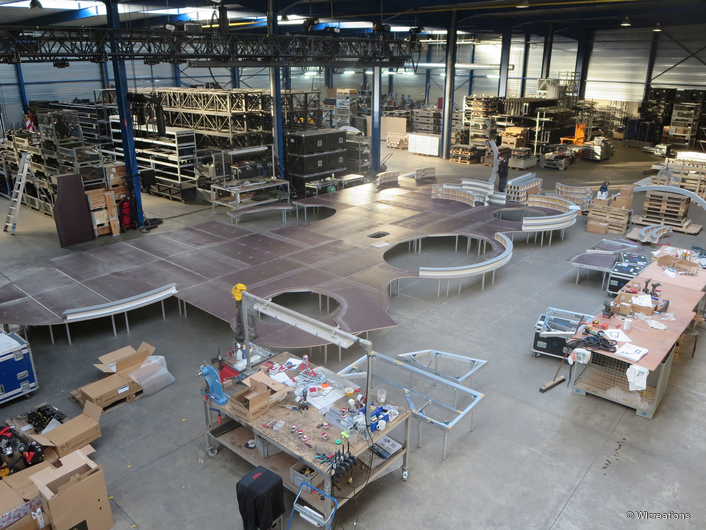 Stage Sets
The second phase of the project for WI was fabricating the intricate stage - which has flooring at 200, 400 and 600 millimetre levels - in three different variants to deal with the different sized venues on the tour.

This was particularly galvanising because of the numerous curved shapes involved in all the downstage and offstage elements of each stage … entailing the manufacture of many different parts to produce exactly the correct contours when the three versions of the stage were fully assembled.

Each of the three stage levels also encompass LED light boxes on their downstage and offstage edges. Additionally, the 600 mm level contains a trap-door for small stage props and houses three hydraulic scissor lifts which are used for performer show moves.

Set designer Marcos Viñals worked for Dragone and produced all the visual designs, including the complex staging shapes and artwork for the Marley floor covering.

The biggest version of the stage is 18 metres wide by 12 deep – so far used only at the Kremlin – while the larger touring version is 13.3 metres wide by 8.5 metres deep, with a smaller one at 9.2 metres wide and also 8.5 deep.

WI also provided the scissor lifts and integrated these into the stage surrounds.

Most elements of the central 600mm level could be re-used across all three versions, but the 400 and 200 mm sections were completely specific to the different variants of the stage.

Fountain Effect
The third scenic element needing the WI touch is a downstage lift with fountain effect that is revealed in the final song of the set.

WI built the 3.2 by 2 metre aluminium water tank with integrated forklift sleeves, wheels and adjustable feet for easy handling and levelling, whilst also housing all the lifting mechanics, one large central water fountain and 8 periphery nozzles with their relevant pumping equipment! 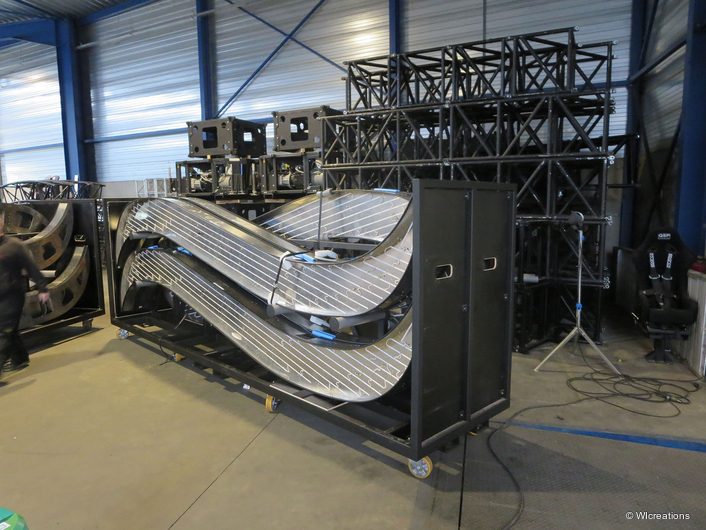 During the show the platform sits level with the stage. For the final song, it is lowered 15 cm into the water and the fountains start, revealing a stunning visual effect that had stayed invisible for most of the show.

All the equipment was purchased by the production and WI trained their operator to run and maintain it for the duration of the tour.

All the flying wings and stage parts have been designed by WI to pack into dollies, clearly marked up to make the build / break-down process as straightforward and efficient as possible for the crews and for local transportation.

The time between receiving the signed contract and the first delivery leaving Belgium for Moscow by road - which took around a week - was just 6 weeks.

WI’s designated team of R ‘n’ D, project management and administration members dealt with the project from their Heist-op-den-Berg HQ, assisted by the warehouse crew for system assembly. Another four people were dispatched to Moscow to aid with the first time assembly.