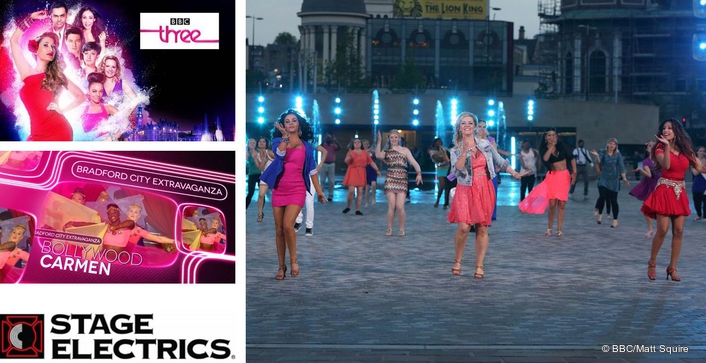 As East met west on the streets of Bradford, Stage Electrics lit the way for a spectacular live to air production
As part of its commitment to regional broadcast, and in celebration of Bollywood’s 100th anniversary, BBC Three commissioned one of the most colourful and dramatic live events the city of Bradford has ever seen.

A free event held in Bradford’s City Park, with famous Bollywood actors and dancers flown in from India, plus some well-known faces from the UK, East met West and opera met Bhangra in Bollywood Carmen Live, a truly modern adaptation of Bizet’s classic opera. Stage Electrics was there to light the way for this spectacular production, deploying both crew and lighting equipment.

There are challenges with any live-to-air production, but taking over a city centre for a week entails a whole extra raft of considerations.

The main challenge was to light a show that took place at nine o’clock in the evening on a date close to the longest day of the year, making it stand out for both the television transmission and the live audience; then there was laying over 10km of cable to power an area of just under 25,000m2, the majority of which the public had to be allowed to use during the week-long build, and the cast needed to be able to dance safely around on show day; and working with multiple authorities to place equipment on roof tops, lampposts and other public structures, whilst making sure they are all weather protected. And all of this to an exacting budget.

But with a hand-picked crew, including Production Manager Russell Payne and Gaffer Ben Grashoff, a BAFTA Award winning Lighting Designer and Stage Electrics’ expertise, the broadcast went without a hitch.

When Lighting Designer Nick Collier first approaches a project, his primary concern is physics. “If there are a certain number of people on stage within a certain area, I light them first just so that they can be seen first, then I make it pretty,” he explains. “We were working to a reasonably tight budget here and, as it’s a daylight show, there are certain limitations. However, it’s a fantastic venue, the fountains looked stunning and there was a beautiful building as a backdrop.”

“We’ve used LED lighting on the lamp posts around the mirror pool, which can easily be seen in daylight, plus a range of other lighting including Martin Professional’s new Mac Viper Wash. These were fresh off the production line and into Stage Electrics warehouse and I wanted to use them because the mirror pool is the same size as The O2’s lower bowl and we could only fix lights around the edges. We needed something that could reach all the way to the middle and I was sure the Viper Wash could do that.” 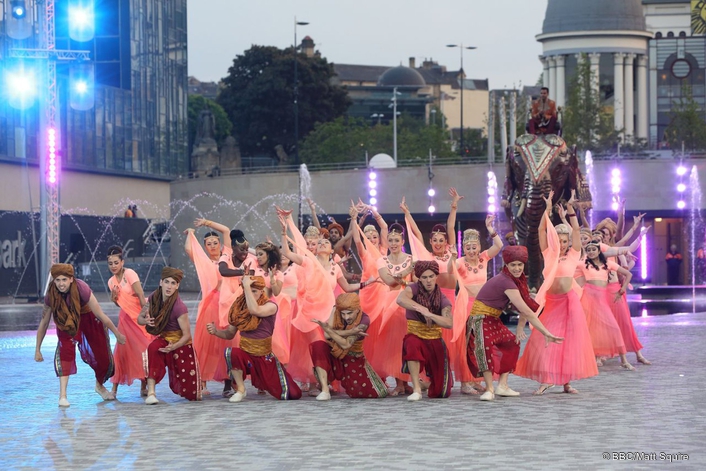 Staged as a ‘filmic drama’ that included full Bollywood scenes with 30 dancers on the main stage and in the mirror pool, segues into backstage love scenes, a fight down a back alley and sections outside a café, Bollywood Carmen Live prescribes a lot of colour. “There were massive changes from one scene to another, so they stand out from one another and add to the drama, so we used lots of yellow, green, oranges and red,” says Nick. “Since it was a scripted show, we had pre-programmed everything into a GrandMA II lighting console, so that the only thing that would possibly change were the physical levels, but everything else was fixed so the cameras knew what to expect at any given moment. 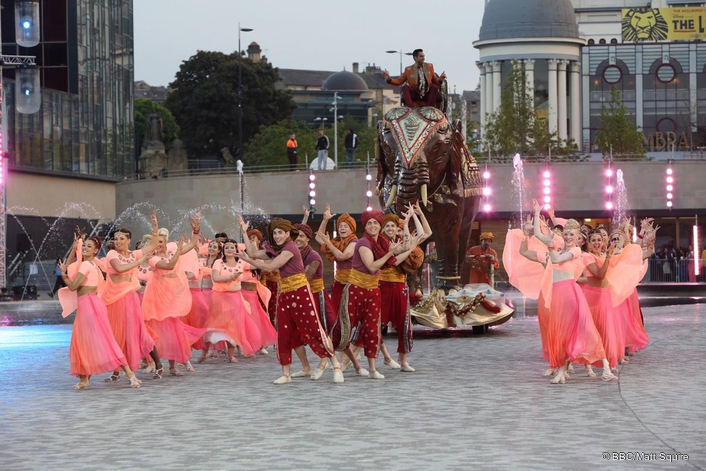 “Knowing the logistical problems, and the size and scale of the job, Russell hand picked the Stage Electrics’ crew and at no point was there a weak link. Russell knows what will and what won’t work for me and for the production.

“You can have great kit, but if you haven’t got the right people, it won’t work. Russell and Stage Electrics made sure neither I, nor the BBC, was let down at any point.”