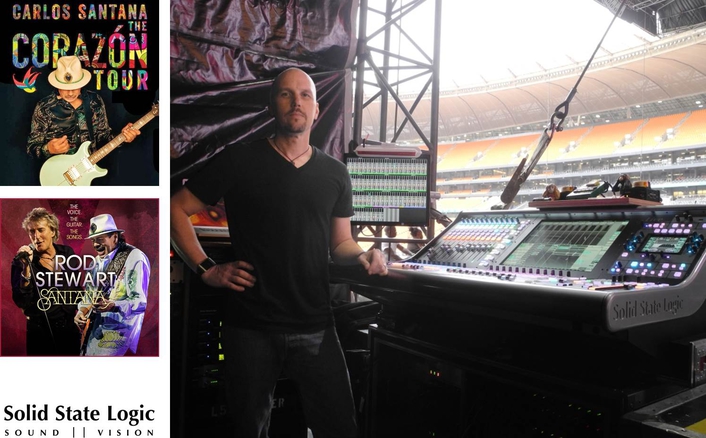 “Once I finally got to see the console, it drew me right in … for me, it’s about design, use, accessibility and layout”
Mixing multiple wedges and in-ear mixes for a large band with a dynamic musical set requires a flexible console that can quickly be operated manually. For this reason, an SSL Live console is on the road with iconic Latin rocker Carlos Santana, whose perennial monitor engineer, Brian Montgomery, is using it to mix both stereo wedges for Carlos and IEMs for his band. Following last winter’s residency at Mandalay Bay’s House of Blues (HoB), Santana has been globetrotting, making stops at the Dubai Jazz Festival, Johannesburg’s FNB Stadium, Cape Town’s Grand Arena and the New Orleans Jazz Festival as part of its Corazon tour. Carlos and his crew will then join Rod Stewart for The Voice, The Guitar, The Songs tour this spring and summer.

Carlos is the winner of nine Grammy® Awards – the most for a single project – for Supernatural, which revitalized his career, leading to the first Las Vegas Hard Rock residency and his ongoing HoB appearances each winter. An industry legend in his own right, Montgomery has mixed Santana’s monitors for 16 years. “I was an analogue guy for a long time, but, it got to where I’d actually outgrown most of the analogue consoles on the market,” he explains. “I was using a pair of competitor consoles to get 26 mixes, and I needed more space. When we went to Japan, the model I’d been using wasn’t available, so we switched to another competitor, which I’ve used as my primary console for Santana ever since. That is, until the SSL Live came out. I’m an old school guy and I like that SSL has an additional focus channel screen, which gives me all of the control that I need, alongside the main screen. This setup lets me have multiple modes of accessibility to my work surface, which is key.”

Montgomery was introduced to SSL Live by Rob Mailman, FOH for Santana and GM of Touring for Sound Image, which supplied the console. “I’d been looking to switch consoles, so when Rob started telling me about the way SSL Live’s control surface was laid out, I was extremely interested,” explains Montgomery. “Once I finally got to see the console, it drew me right in. I actually never heard the console before I decided to use it. I know what an SSL sounds like in the studio; they’re sonically incredible. For me, it’s mostly about design, use, accessibility and how I could lay the desk out for what I need to do. I don’t have any static mixes with the band, every song is different, so there’s never quite the same setup each night. I have to have a console that I can get around on very rapidly.”

With eight stereo wedge mixes across the front of the stage, Montgomery has them set as post-fade mixes that are tapered, so when Carlos is near somebody, the sound is turned down a little to give him an even mix across the stage. With this setup, Carlos can go anywhere and still hear what he wants or move away from sounds that he’s not interested in hearing.

“I’ve always liked to have Carlos’ setup accessible through post-fade on my surface so that I can do anything for him at any point in time, even if I’m messing around with the mix for somebody else in the band,” continues Montgomery. “Most of the band members are on in-ear monitors, so I need the versatility to mix Carlos while I’m changing the IEM feed for another band member. With many other digital consoles, that’s difficult to do because you have to stop what you’re doing for one performer to do something for another. With the SSL Live, I don’t have to do that. I tap the screen for the mix and I can change something for someone else rapidly without popping through four different layers.”

Montgomery first used SSL Live at HoB Las Vegas during a sound check. “I did a line check with the backline members and I started to notice how sonically I didn’t need to EQ as much,” he says. “The preamps sound very nice, very natural, no additional high-end, no tin that I often hear out of other digital consoles, very warm and very forgiving. With our current set, which is very loud, I might get plenty of input gain as well as a lot of output. All in all, with the SSL Live, I don’t have to EQ vocal mics to avoid feedback. It gives me a good natural sound and, regardless of the mic placements, I don’t have drastic EQ changes on the instruments.”

After Montgomery started using the SSL Live, every band member was impressed with its quality. “They all came to me and said it sounds brilliant,” he concludes. “It was something that kind of threw them because it was very natural sounding. Over the years, a lot of them have gotten used to something that was a little brighter or a little thin sounding. No matter what you did to the midrange, you had that digital imperfection. Now that I’ve switched to SSL Live, all of the musicians have come to me and said that sonically they’re very pleased with how it sounds. With a lot of my ear mixes, I don’t have to drive the units as hard. The musicians actually have to turn their packs down and I don’t have to send as much signal.” 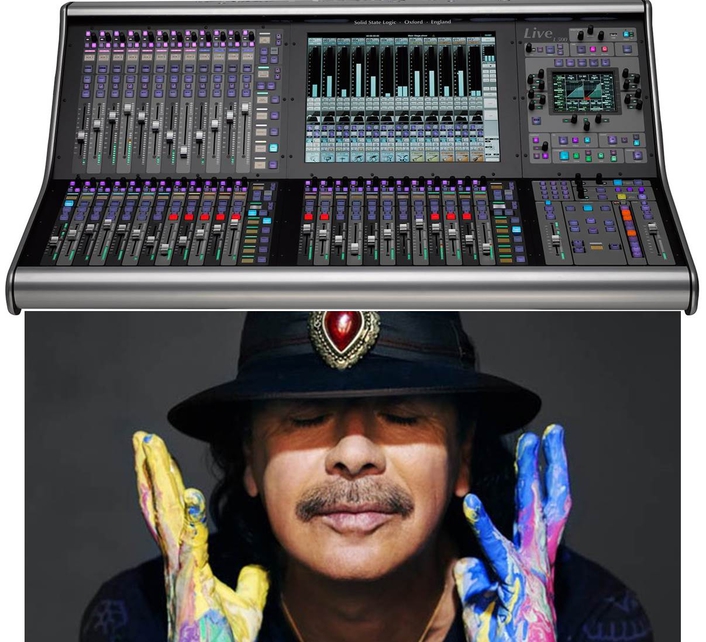 Solid State Logic is a world leading manufacturer of analogue and digital audio consoles and provider of creative tools for music, broadcast and post production professionals.

Carlos Santana
The Voice The Guitar The Songs
SSL